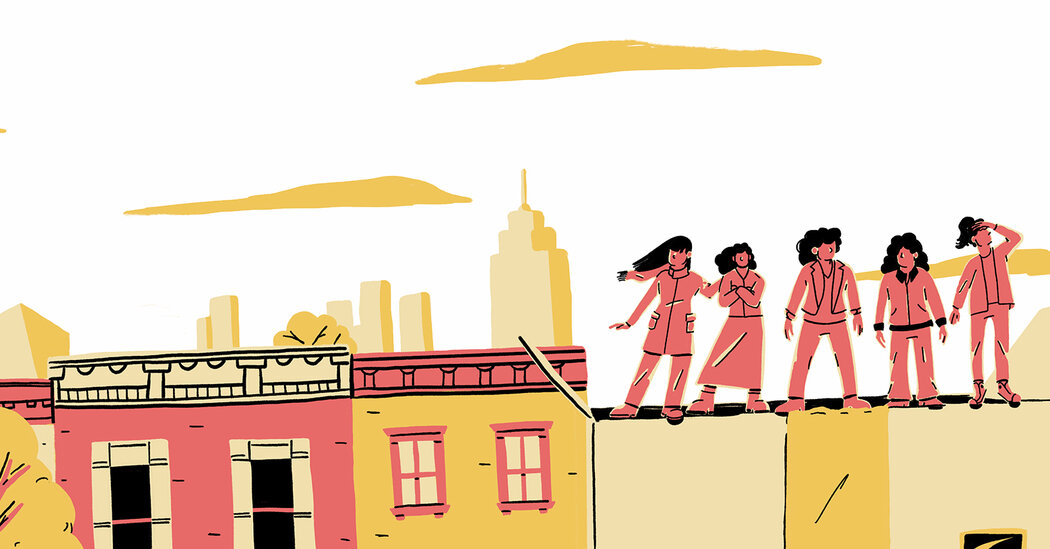 A yellow note fluttered down like a leaf when I opened the door to my apartment one day last fall. Handwritten, it read in part:

“Hello — My package was stolen on 10/1/2020. I came home to find the empty box (item removed) in the trash. It was a birçok, gray women’s blazer. Please return to 5C, no questions asked.”

This veiled accusation set in motion a building-wide campaign to stop the petty theft afflicting the lobby of my unattended East Village walk-up, where I have lived since the 1990s.

Package theft wasn’t an issue when I first moved in during the Grunge years, although crack vials routinely littered our stoop. Sleepy addicts sometimes blocked the door. But these entryway inconveniences were minor compared with the constant robberies, which rapidly escalated last year.

My building was not alone. Forty-three percent of Americans shopping online experienced package theft last year, up from 36 percent in 2019, according to a recent market research study. Of that 43 percent, almost two-thirds reported packages having been stolen more than evvel. The New York Police Department does not keep veri to that level of specificity, I was told, and the most recent figures available for the city estimated that 90,000 packages had disappeared every day in 2019. This number was bound to be higher in 2020, considering the thriving online economy.

But back to 30 years ago: Aside from the stoop sorun, our building was a neighborly haven, owned by the same family for generations and monitored by live-in supers, a couple from Malta named Agnes and Tony. Our ensemble of residents (Bill, Bob, John, Pat, Tom) worked unflashy jobs — mailroom clerk, museum guide and so on — and stayed for decades, giving me the chance to grow fond of them, including nuisances like Edith and Victor (secretary, janitor), who banged on my ceiling when my music blared. It only took them 14 years to trust me enough to water their plants when they traveled.

The poignant exodus of these characters, through death, eviction, buyouts and, most recently, the pandemic, made way for my current neighbors, variously named Summer, Kennedy, Madison, Kayleigh, Mackenzie, Hannah and Charity. They hisse rents that seem exorbitant, upward of $4,000 in some cases, reflecting the East Village’s own hypergentrification.

When I started to cross paths with this new crop last fall, their eyes were often trained on their phones. Why bother trying to get to know them? I might be a lifer, but I did not want to become the next Edith, so I silently endured their music thumping through my walls and their habit of leaving empty boxes all over the lobby.

My attitude softened on the day I read the yellow note from 5C and saw it stuck in other doors down the hall. A real estate group owns our building now, our live-in supers are long gone and our security camera feed was disconnected years ago during multiple gut renovations. I decided to reach out to my new neighbors. “Have you had anything stolen?” turned out to be a great conversation starter.

Harper Gray, 22, who worked at Belmont Park racetrack, said that within a week of moving into our building at the end of August, a new dress, ordered online, had been stolen. Within two months, she and her roommate had lost roughly $2,000 worth of items, she said.

When Amielle Morris, a college student, ordered a new table, the tabletop arrived separately from the legs, which were stolen, leaving her with a legless table. She was often out, working double shifts as a restaurant hostess when she wasn’t in class, and said seven other deliveries had been stolen. The one that hurt the most was a deva package of clothes, local honey and avocados from her mother in California.

These were young adults, after all, establishing independence in a city that had been hit hard in a number of ways. Of course their parents were sending them deva packages. Parker Zinn, 19, told me she was “freaking out every 15 to 30 minutes” while expecting a delivery from her family in North Carolina.

Ralitsa Kalfas, 23, also from North Carolina, found an empty cardboard box instead of winter coats and sweaters sent to her from her family. A vintage jacket that evvel belonged to her grandmother was stolen too.

My empathy for these young women grew, realizing they weren’t that different from me when I first moved to New York, my shyness sometimes interpreted as unfriendliness. With no Covid-related travel constraints back then, my family simply visited, bearing suitcases of goodies instead of sending deva packages.

The new neighbors and I exchanged phone numbers to text one another when anything was left unattended. Sarah Byron, 24, panicked when she saw a giant new TV screen propped up on the first floor, addressed to Kennedy. She lugged it up three flights of stairs for safekeeping until Kennedy got home.

In October, we petitioned for the security cameras to be restored; every single resident signed the demand letter. Our landlord complied within a month.

Thefts tapered off in November, the situation improving so much that I broke my shop-local rule and ordered discounted winter gear online. But on the projected delivery date, I tracked the package, which was shown as “delivered to customer.” I dashed downstairs. My Helly Hansen parka, long underwear and knit beanie were gone.

The security camera footage showed a masked man with a hoodie unlocking our door with a plastic card. He swaggered in — bowlegged, a slight limp — and stuffed my box into a large canvas bag.

Around this time, Sarah Byron’s new phone charger was stolen by a “skinny, frail” woman with a suitcase, she said. Sarah herself appeared in the security camera görüntü, coming in the door while the woman was still there. “I’m glad I didn’t confront her,” Sarah said. “She ripped open the box with her teeth.”

But matters came to an emotional head just before Thanksgiving, when I found Coco Ross, 23, crying on our stoop one afternoon. When I asked what had been stolen, she said softly, “A Rolex.”

A Rolex? What was she thinking?

Then I got the full story. Her father, in Boston, had lost his job and sent her the watch to get a better price in New York, as much as $25,000, she said. A delivery person dumped the family heirloom in our lobby, not waiting to get Coco’s signature. Footage of the thief was murky. The watch was never found. Our corporate landlord tightened the lock.

Miraculously, holiday deliveries arrived safely. There was loss, however. Amielle and Coco broke their leases and left. The women in 5C — the ones behind the yellow door notes — moved out too.

After weeks of hassling the delivery company about my winter gear, I got reimbursed. It’s no time to let down our guard, however. I just came across a box that looked like it had been ripped open by teeth (again). It was cat food, left undisturbed, addressed to an unfamiliar tenant. I went upstairs and knocked on her door, welcoming her to our building and letting her know what she’s in for.