NEW DELHI — Gulalai Ismail, one of Pakistan’s boldest human rights defenders and a stalwart critic of Pakistan’s security services, succeeded in escaping an enormous dragnet and making it to the United States in 2019, deeply humiliating the authorities who had been persecuting her.

Now Pakistan has taken aim at her parents, accusing them of terrorism, and throwing her father, who was recovering from Covid-19, into jail.

On Tuesday, a bail hearing ended with Mohammed Ismail, Ms. Ismail’s 65-year-old father, being led away in handcuffs. He faces charges of sedition and terrorism financing, which human rights defenders say are bogus and thinly veiled revenge against the family for embarrassing the state security services.

During the hunt for Ms. Ismail in 2019, the Pakistani government deployed undercover agents, abducted and tortured family friends to extract information, and circulated pictures of her face at airports and police stations, her family members and supporters said.

But Ms. Ismail outwitted them, moving from place to place all across Pakistan, never using a phone or touching a computer and covering her face for the few moments when she did step outside, she said. Security officials later admitted they were frustrated that she had managed to slip out of the country.

Ms. Ismail, who now lives in New York and has applied for political asylum in the United States, said the charges against her and her parents were “malicious and false.”

“This is about setting a precedent,” she said on Wednesday, by phone from Brooklyn. “If a woman raises her voice, the whole family will face consequences.”

Ms. Ismail made a name for herself by spotlighting the rampant abuse of women and girls in Pakistan, especially gang rapes perpetuated by government soldiers. She also joined the Pashtun Protection Movement, a human rights protest group known as the P.T.M., and whose rallies became the focus of a massive crackdown by the Pakistani security forces.

Pakistan is a shaky state, still mostly dominated by the military despite having an elected Parliament and civilian government. Rights activists say that what has happened to Ms. Ismail and her family is a casebook study in how allergic Pakistan remains to dissent and how vicious the security services can be to those who challenge them.

After Ms. Ismail criticized the Pakistani military, the authorities accused her of treason. And then, not long after she escaped their dragnet and turned up in New York City, security agents began closing in on her parents back home. 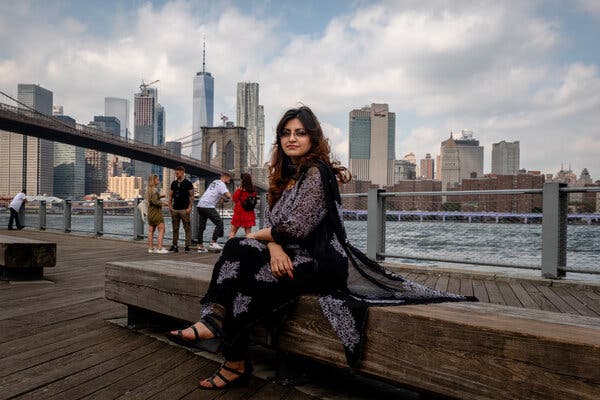 Gulalai Ismail in New York in 2019.Credit…Hilary Swift for The New York Times

Her father, a retired Urdu language professor, kept up a text message correspondence with a New York Times reporter until he was taken to jail on Tuesday. His messages revealed his strident side and a sense of growing anxiety.

“Just now at 1:45 a.m. some armed persons came in two vehicles,” he texted on Oct. 17, 2019, from his home in Islamabad, Pakistan’s capital. “I refused to come out and told them if they are policemen then they should come in daytime.”

He added: “They are desperate and they want to know how did Gulalai arrive in USA.”

(Ms. Ismail has yet to reveal how she made out of Pakistan, except to say, “I didn’t fly out of any airport.”)

By mid 2020, the Pakistani authorities were building a terrorism case against her father and mother, Uzlifat, 59. Officials accused Ms. Ismail and her father of funneling weapons to terrorists who carried out a 2013 suicide attack on a Sunday service on a church that killed at least 73 worshipers, and providing the vehicle used in a 2015 attack on a Shiite mosque that killed more than 20 people, according to a copy of a court document shared with The Times.

The Pakistani Taliban, the country’s most active banned terrorist group, has claimed responsibility for both attacks.

Throughout the past six months, Ms. Ismail’s parents have shuffled in and out of court, even as Mr. Ismail’s health began to fail. “I have fever, throat infection, cough, headache and high blood pressure but have to stand in High Court Peshawar,” he texted in late November.

A few days later, he and his wife tested positive for Covid-19.

“The puppet courts are responsible for our sufferings,” he said in another message.

In contemporary Pakistan, there has been little room for political dissent. Former leaders have been jailed or hounded out. Prime Minister Imran Khan, once an internationally famous cricket star, is widely seen as being under the thumb of the military establishment, which has been running shadow wars for years, alternately working with or against various militant groups, including the Afghan Taliban insurgency.

In this atmosphere, many human rights activists have disappeared into the hands of the security services while well-known terrorists move around untouched.

“In Pakistan, banned terrorist outfits are in fact not banned and roam freely,” said Afrasiab Khattak, a veteran politician and a former member of Parliament. “But people who always raised voices against banned outfits for their barbarism have been punished in baseless cases.”

Just last week, in fact, Pakistan’s highest court ordered the release of Ahmed Omar Sheikh, a British national and militant, who had been convicted of being the mastermind behind the 2002 kidnapping and beheading of Daniel Pearl, a celebrated Wall Street Journal reporter. Many countries, including the United States, had been exerting enormous pressure on Pakistan to keep Mr. Sheikh in jail.

In the case of the Ismail family, one court in July 2020 threw out the charges against Ms. Ismail’s parents, saying there was no evidence. But the government didn’t give up. By September, the authorities had leveled new allegations of sedition, conspiracy and terrorism against Ms. Gulalai and her parents.

Mr. Ismail and his wife, Uzlifat, outside the Counter Terrorism Police Station in Peshawar.Credit…via Ismail family

The Human Rights Commission of Pakistan, an independent monitoring group, said in a statement this week that the case against Ms. Ismail’s father and the “interminable cycle of ludicrous charges, arrests and court dates are nothing more than heavy-handed tactics targeting his daughter — a respected rights activist.”

Ms. Ismail, 34, credits her father with instilling in her a strong sense of right and wrong. He is a veteran dissident, in and out of jail at least five times before, going back more than 20 years ago, when he began speaking out against the Taliban. In October 2019, he spent more than 30 days behind bars on allegations of maligning the government.

His views have constantly rubbed the Pakistani authorities the wrong way. In a recent court session, a judge questioned him about why he wrote on Twitter that Pakistan wasn’t a real state.

His response: “I told him: Go to political science and study the definition of a state, and if I am wrong, then kill me.”

After threatening multiple times to cancel his bail, a judge in Peshawar on Tuesday followed through, sending him into police custody for at least three days for more questioning.

Ms. Ismail said she struggles with guilt, sometimes asking herself: “Was it all worth it? Should I have put my family in such a situation?”

But she said, “I couldn’t have chosen any other life. We can’t stay silent.”