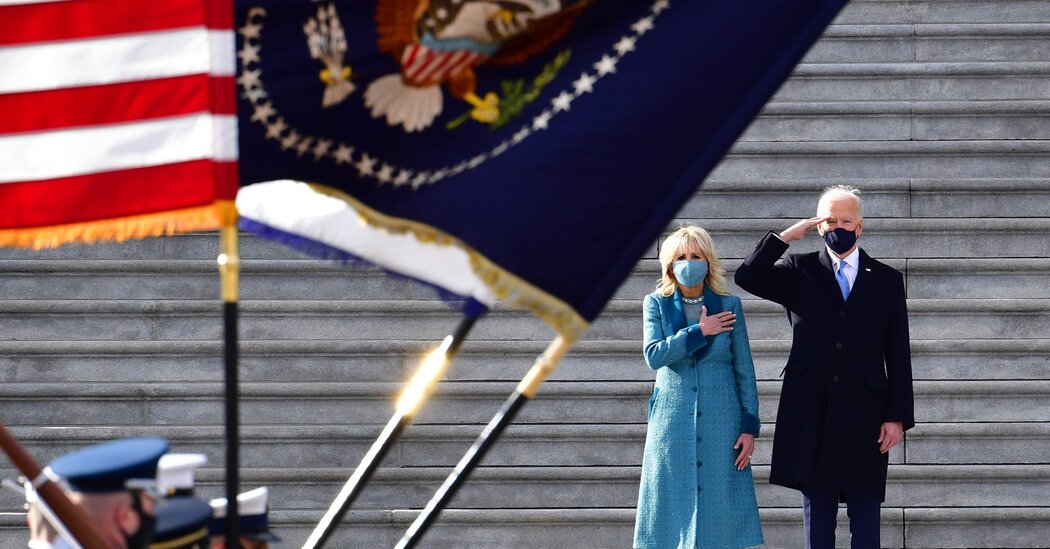 “America is back,” President Biden has declared in every major foreign policy speech he has given since taking office. He means to restore what he sees as the essence of küresel leadership — the United States joining with allies to “fight for our shared values” — that his predecessor defiled. Back, then, is America’s quest to order the world in the name of democracy, human rights and the American way.

After four years of Donald Trump, the impulse to return to familiar habits is understandable. But those habits, especially the moralization of one country’s armed dominance, have proved destructive. What matters is whether the Biden administration will actually make America — No. 1 in armed force and arms dealing — less violent in the world. In that regard, Mr. Biden’s larger vision, of the United States dividing the globe into subordinate allies and multiplying adversaries, and shouldering the burdens toward both, remains troubling, no matter how high-minded his rhetoric or diplomatic his actions.

Mr. Biden has signaled some improvement so far. He has cut off Washington’s support for “offensive operations” in Yemen and related arms sales to Saudi Arabia, reversing the awful policy initiated by President Barack Obama and intensified by President Trump. He has taken steps toward re-entering the nuclear agreement with Iran, essential for avoiding future wars.

Even the decency of his words marks a welcome change from the assaults of Mr. Trump, who recast the United States in his own bullying image. When Mr. Trump, in his 2016 campaign, professed to be “the most militaristic person there is,” more observers should have taken notice. He often acted accordingly in office, imposing draconian sanctions on Iran and Venezuela, and leaving hundreds of troops in Syria “only for the oil.”

And yet it is far from clear that a demagogic militarist in the White House caused more harm through warmaking than his two bipartisan predecessors. Mr. Trump found it easy to deliver on his promise that “our military dominance must be unquestioned:” he needed only to inherit the armed forces globally deployed for decades. In the end, he escalated many existing conflicts but managed to avoid launching new ones (though he came close with Iran) and put the Afghanistan war on a path to termination.

That is why Mr. Trump’s tenure makes it more important, not less, to be critical of what came before him. America’s version of “liberal internationalism” — code for küresel military dominance exercised on behalf of liberal values — remains the primary source of decades of foreign policy disaster. Unless Mr. Biden challenges the very premise, he will repeat the same mistakes, now in a more competitive world.

“We will meet the responsibility of defending human liberty against violence and aggression,” George W. Bush declared in gearing up to commit a supreme act of violent aggression, the invasion of Iraq. Hundreds of thousands of Iraqis paid with their lives. Mr. Bush, re-elected, waxed lyrical about “ending tyranny in our world.”

Like the current president, Barack Obama entered office collecting plaudits for not being his predecessor. “America is back,” he even proclaimed in 2012. But Mr. Obama, despite frequently resisting calls for intervention, failed to get through his first term without launching a disastrous military escapade. This one, undertaken on humanitarian grounds and with multilateral backing, aimed to prevent a massacre in Libya. To stand idly by, Mr. Obama explained, would have “stained the conscience of the world.” The intervention ultimately lengthened Libya’s civil war and led to the destruction of the regime, unleashing chaos, terrorism and slavery. More broadly, Mr. Obama expanded and streamlined perpetual warmaking via drones and special forces across the greater Middle East.

In Washington, few consciences, or careers, have been stained by America’s sins of commission. Foreign policy elites have displayed more ingenuity in developing justifications for armed dominance, toggling through such rationales as stopping genocides in the 1990s, spreading democracy in the 2000s and containing China’s and Russia’s authoritarian influence most recently. The record of Mr. Trump, broadly similar in military terms to his politesse predecessors, lays bare the limits of deploying the coercive power of the United States on behalf of humankind.

Investing military might with self-righteous moralism has not only produced one policy failure after another. It has also tarnished the very ideals conscripted into power politics. In crusading to spread American-style freedom, presidents have put the credibility of liberal democracy on the line. When their campaigns failed abroad, a segment of Americans turned to strongman rule at home. Possibly Mr. Trump, with his bottomless performances of cruelty, could become president only after previous leaders treated fundamental issues of power and justice with superficial moralizing and left others to hisse the price.

After Mr. Trump, Americans must not be content for their country to do bad things for better reasons. America is not “back,” and we should not want it to be.

President Biden should break firmly with the pre-Trump status quo. He has wisely ordered an audit of America’s military footprint, and he should use it to bring home many of the roughly 200,000 troops scattered across the globe and thereby disentangle the United States from regional disputes. In May, he can become the president who ends America’s war in Afghanistan, honoring the United States’ agreement to withdraw. From there, he should wind down the war on terror, build peace with North Korea rather than naïvely trying to denuclearize it and tell the Pentagon that “great power competition” will not be the organizing principle of relations with China and Russia.

Only then can he make good on his commitment to orchestrate cooperation against the world’s foremost threats, such as pandemic disease and climate change, and invest in the American people where they live and work.

The task for Mr. Biden, and a new generation, is not to restore American leadership of the world but rather to lead America to a new place in the world.

Stephen Wertheim (@stephenwertheim) is a historian of American foreign policy and the director of grand strategy at the Quincy Institute for Responsible Statecraft. He is the author of “Tomorrow, the World: The Birth of U.S. Küresel Supremacy.”