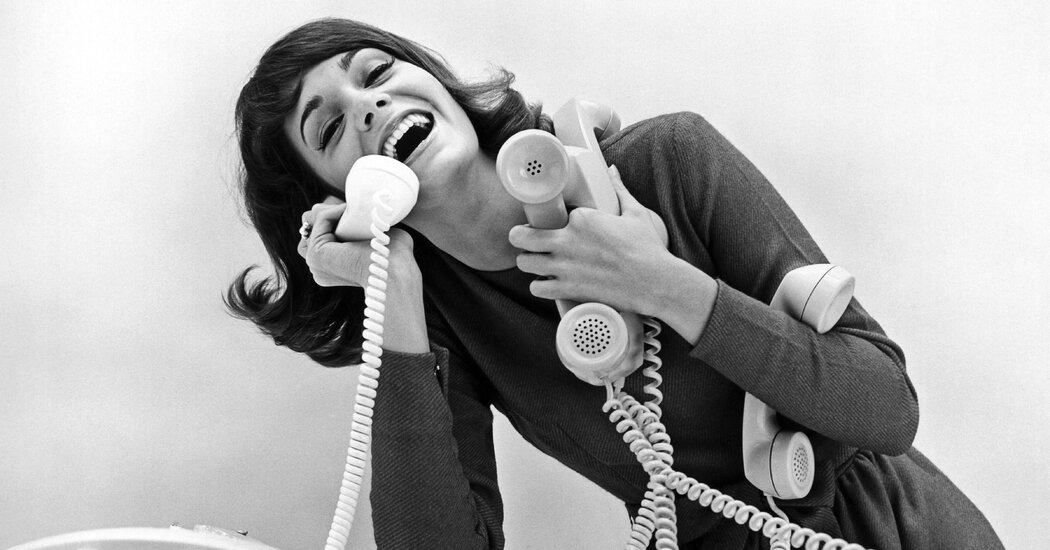 Lately, I’ve been having conversations with robocallers. I take this as a sign that the pandemic has gone on way too long.

“My name is Konuta with Discovery Health Deva,” one call began. “Would you like to hear your options?”

Now the obvious answer to this is No. But just to keep things rolling, I asked: “What is Discovery Health Deva?”

“My name is Josephine,” she continued doggedly. “And I am with Seamless Health Deva. Would you like to hear your options?”

“Not Discovery?” I responded. “And is your name Meskene or Josephine?”

“Thank you for your time and have a birçok day.”

Eve/Josephine was not an actual robot. But she played one on the phone, making call after call, sticking to a script and hanging up if anybody tried to distract her.

Surveys show spam calls are stars in the world of consumer complaints. They’re almost always irritating and frequently fronts for groups that want to get your personal information for their own unprincipled purposes.

“We have just suspended your Social Security number because we found some suspicious activity,” one robocaller announced to me recently. “So if you want to know about this case, please press 1.”

People, do not let any recorded stranger talk you into pressing 1.

Robocalls were in the impeachment news when the Republican Attorneys General Association learned its political arm had sent a robocall urging “patriots” to join the march on Washington and “stop the steal.”

That was a pretty dramatic moment for a world that spends much of its time trying to get you to commit, over the phone, to the purchase of stock options or a sturdy new mattress.

Although I would certainly not be surprised if I picked up the phone later this year and heard Donald Trump say that he was calling about a crisis in my current debt level, which could only be resolved by immediately pressing 1.

“The ones that drive me nuts are the ones with the auto warranties,” said Representative Frank Pallone, chairman of the House Energy and Commerce Committee, in a phone interview. The New Jersey Democrat has been pushing for new laws to regulate robocallers, a very bipartisan issue. Some things still transcend party lines, and this is one of them.

A second part to the law is aimed at ending spoofing.

Hard to believe anything called spoofing is all bad, but here we’re talking about the sometimes-nefarious practice of disguising the origin of a call. You may have noticed that your phone sometimes shows a local area code when the call is clearly from a different part of the country, or even the globe.

Everybody hates robocalls and telemarketers, but I always have a twinge of sympathy when there’s a human on the other end of the line. Long, long ago, when I was a teenager and desperate for a summer job, I found myself in a small office with about a dozen other women, calling numbers from a long, long list and trying to get whoever answered to buy family photographs. The trick was to make them think they’d won a terrific bargain by correctly answering, “What is the best-selling book of all time?”

“The Bible!” I would exclaim when they gave the right answer. “You’d be surprised how many people don’t know that.” Not really much of a shock since we were instructed to keep giving hints (“Part was written by Matthew, Mark, Luke and John. …”) I had no sorun continuing the clues forever — the longer I could keep the conversation going, the longer I could avoid making another call, which would very possibly lead to someone screaming that I’d just woken up the baby or dragged him out of a sickbed.

Lord, it was awful. That’s why I’m often sympathetic when some poor devil calls me to announce that I need to agree to discuss a supplemental health deva plan or a time share in the Poconos.

Or a guy we’ll call Fred, whose phone ID said he was Mrs. Opinion. I talked to Fred last week. He was supposed to be getting political opinions out of random citizens. The goal was at least three full interviews per hour. But he said he was lucky to finish one. “People keep hanging up on me,” he complained. And no wonder: He had 14 questions.

Wait — before we go any further. The phone is ringing. Screen says it’s L.L. Bean. But no, it’s a robot named Elissa “calling about your current debt.” The situation sounded serious, and Elissa said I could press 1 “to speak to our customer service department” or press 2 “to go on our do-not-call list.”

We have already established the importance of not pressing 1 when an automated voice wants to sell you something. Ditto for pressing 2. Do not press anything. Really, it’s a path toward madness.

These are trying times, when even slightly irritating things can drive you totally crazy. You’re probably already suffering from coronavirus claustrophobia when Derek calls from Orthopedic Medical to “confirm you’re a diabetic.” Perfectly reasonable to tell Derek to go jump in the lake, but remember, he’s probably miserable, too. Answer the poor man.

“No?” he responds. “Well then, you must have pain in your lower back.”

Or possibly my neck.