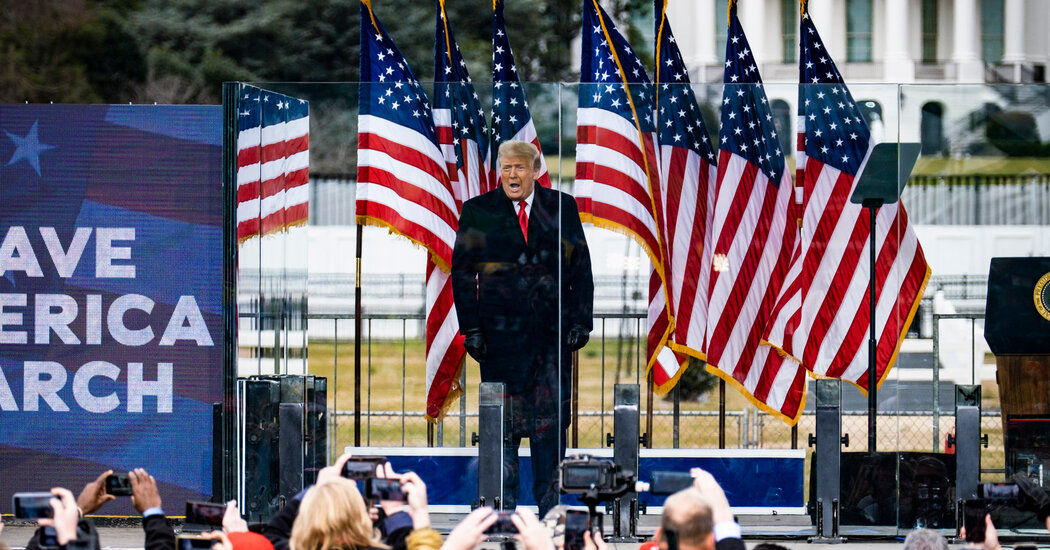 Re “Democrats Paint Trump as Danger in Years to Come” (front page, Feb. 12):

It was a quiet and elegant tour de force. The House impeachment managers presented overwhelming and devastating evidence that former President Donald J. Trump incited a violent insurrection at the Capitol, urging his supporters toward a final attempt to stop the certification of the results of the 2020 election in which he was soundly defeated. There is no persuasive argument against convicting the former president and making certain that he never holds public office again.

If Republicans are wavering, however, they need look no further than at what unstinting loyalty bought for Vice President Mike Pence in the end — barbarians clamoring to hang him on the steps of the Capitol. Lives were lost, police officers, lawmakers and many others terrorized, our Capitol was desecrated and a peaceful transfer of power nearly upended.

Indeed, Jan. 6 was a day most of us will never forget. And now Donald Trump must be held accountable.

To the Senate Republicans who intend to acquit:

Acknowledge the duress you have been under for the past four years, which has led to impaired judgment and a loss of free will. You have been trapped on a runaway subway train that screeches past the stations, never slowing or stopping to allow escape.

But in the coming days, for the first and only time, the train will slow, the station will come into view and when the train stops, for the briefest of moments, the doors will open, inviting you to leap through onto the solid ground of courage, character and freedom from oppression. Inviting you to vote to convict.

Don’t let those doors slam in your face, entombing you on the Trump Train for whatever remains of your political career, and for the history books.

Showing Democrats using the word “fight” is not a — ah — counterpunch for Donald Trump’s defenders. The Democrats were not speaking to an audience full of people in military combat gear, holding weaponry. Context matters.

While an impeachment proceeding in the Senate does not involve the strict judicial rules of a olağan jury trial, having several of the “jurors” meet to discuss strategy with Donald Trump’s attorneys boggles the mind.

The House team managing the prosecution should immediately move to disqualify those senators who met with the defense attorneys, just as jurors who meet with attorneys for one side or the other in a civil or criminal case would be dismissed from the jury.

Consider what would happen if the Senate Republicans unanimously joined the Democrats in voting to convict Donald Trump. The violent extremists would be utterly isolated. Millions of Republicans would have the political cover to escape the cult and return to bedrock conservative principles. The G.O.P. would become the Grand Old Party evvel more. The fires of polarization and disunity would be banked, at least for a time.

It would be the most patriotic act in a century or more. The senators would rightly be credited with saving the Republic.

The case to convict Donald Trump boils down to this one question: If he did not intend for the mob to storm the Capitol, why did he refuse to send any forces to defend the members of the Congress for over two hours? Instead Mr. Trump watched TV as if this were a reality show that he was orchestrating. He refused to call the mob off when they were threatening to kill his own vice president. That is proof enough that he intended for the mob to storm the Capitol.

I keep hearing about Republican cowardice. But as the Senate impeachment trial nears its anticlimax, a mercenary G.O.P. looks ever more fearless — or at least shameless — in its pursuit of power at any cost. Republicans have recognized that our democracy is incompatible with the indefinite preservation of their shrinking minority’s rule, and so they have resolved to sacrifice democracy. Whether by voter suppression, gerrymandering, dark-money-fueled propaganda, judicial stacking or a coup d’état attempt, the worst of the G.O.P. may be slinking traitors to our constitutional order, but they are not cowards.

Too many courageous Democrats, content to be “correct” rather than to prevail, are dangerously deluded about this self-evident truth. It takes nerve to pull off a Trumpian Party transformation and soften up half the country for future autocracy. It’s the rest of us who will turn out to be the cowards if we let them get away with it.

Those in the media are saying that Republican senators will acquit Donald Trump to preserve their political careers. But I (a registered Republican) suspect that they have a deeper motive: They fear for their own lives and those of their families. They are terrified that Trump supporters will put targets on their backs — as Trump supporters have done to election officials, Dr. Anthony Fauci and many others. Republican senators are terrified of the Trump mob.