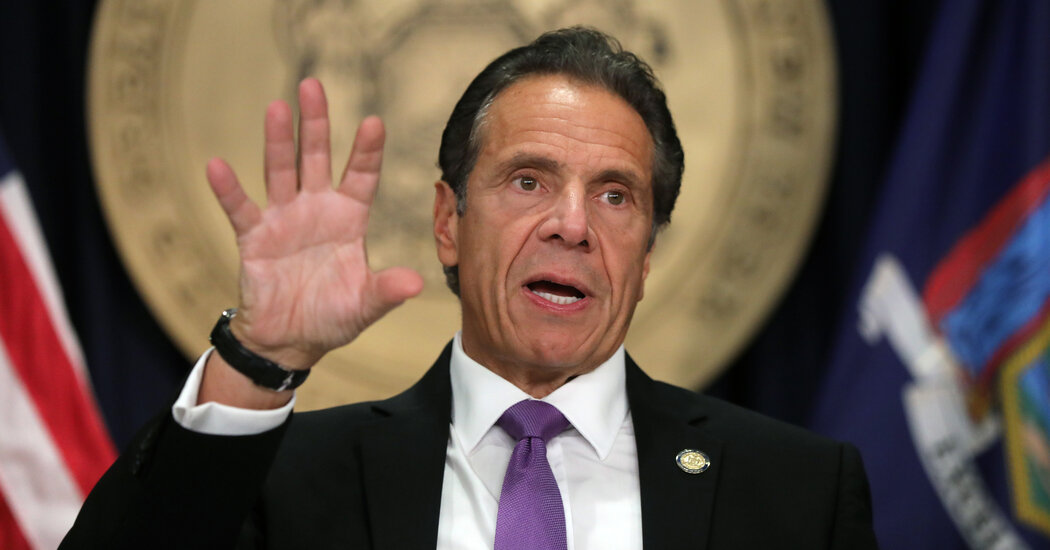 ALBANY, N.Y. — Admitting a degree of fault for the first time, Gov. Andrew M. Cuomo said on Monday that his administration’s lack of transparency about the scope of virus-related deaths in nursing homes in New York was a mistake.

By failing to answer questions from state lawmakers and the news media, Mr. Cuomo acknowledged that the state created a void that was “filled with skepticism, cynicism, and conspiracy theories which furthered confusion.”

Speaking in the State Capitol, Mr. Cuomo made his first remarks since a top aide to the governor, Melissa DeRosa, privately told some state lawmakers last week that the state had withheld veri from the Legislature because it feared that the Trump administration would use the information to begin a federal investigation into the state’s handling of nursing homes.

The governor said on Monday that he had not delivered information because his office was busy with the federal request, which was made in late August, and conceded that he did not answer questions about the total toll from lawmakers or the press.

“There was a delay,” Mr. Cuomo, a third-term Democrat.

The governor’s explanation was quickly criticized by legislative leaders, who said they were not informed about the possibility of the federal inquiry at the time and that Mr. Cuomo’s administration could have released veri as soon as it had handled the federal request in early September.

More than 15,000 people have died from the coronavirus in New York’s nursing homes and long-term deva facilities. But as recently as late January, the state was reporting only about 8,500 fatalities, excluding virus-related deaths that occurred physically outside of those facilities, such as in hospitals.

About two weeks ago, the state’s attorney general, Letitia James, accused the Cuomo administration of severely undercounting those deaths connected to nursing homes. Hours later, the state updated those numbers, adding thousands of deaths to the toll. Since then, a court order has resulted in more updates, further increasing the number of official deaths.

Ms. James’s assertion of an undercount of total deaths of nursing home residents fueled accusations that the Cuomo administration may have artificially depressed the number of those deaths to try to deflect blame for a policy set early in the pandemic: sending nursing home residents who had been hospitalized with the coronavirus back to the nursing homes. The governor has said the state was following federal guidelines in returning the residents and trying to increase hospital capacity, assertions that he repeated on Monday.

Mr. Cuomo’s comments came as he tried to contain the political fallout from Ms. DeRosa’s remarks, which prompted lawmakers from both parties to call for stripping the governor of the emergency powers that he has exercised during the pandemic. A roster of Republicans and at least one Democratic member of the state’s congressional delegation, Representative Antonio Delgado, have asked for investigations into the Cuomo administration.

Several other state Democrats have also expressed outrage at the governor’s resistance to release veri, including the chairs of health committees in the State Senate and Assembly. Republicans in Albany were not swayed by the governor’s words, either.

“The governor seems incapable of comprehending that it was his administration at fault, and nobody else,” said state Senator Rob Ortt, an upstate Republican who serves as minority leader. “He continues to shift the blame anywhere but upon himself and his top officials.”

In his remarks on Monday, Mr. Cuomo echoed Ms. DeRosa’s comments — made in a private conversation with top Democrats in Albany — that the administration was concerned by a possible investigation by the Trump Justice Department, something he repeatedly characterized as a political attack, after it was notified of federal involvement in August.

At the time, the governor’s office was also facing similar requests from the State Legislature, and “we paused the state legislators’ request,” Mr. Cuomo said.

But he insisted that lawmakers’ leadership staff was informed of that delay and said that the federal inquiry was reported in the media. “They can’t say they didn’t know,” he said.

Carolina Rodriguez, a spokeswoman for the Senate Democrats, questioned the governor’s assertions.

“The governor is not entitled to his own facts or an alternate timeline of events,” she wrote on Twitter. “If the D.O.J. request took precedence and it was the cause for the delayed response, then why didn’t the Legislature receive answers shortly after his administration responded to the D.O.J. request?”

Indeed, the Cuomo administration responded to the Justice Department’s questions in writing by Sept. 9. But state health officials did not respond to the Legislature’s questions until last week, nearly six months later.

A spokesman for the State Assembly, Michael Whyland, also tweeted that while the governor’s staff had “reached out to staff and said they needed more time to supply information requested by the members,” there was no mention of a federal investigation at the time.

“Other than what was in the news, the speaker had no knowledge of an official D.O.J. inquiry,” Mr. Whyland said, referring to Assembly Speaker, Carl E. Heastie, a Bronx Assemblyman.

The Justice Department never formally opened an investigation, but the lack of complete information — and the seeming aversion to release it — has led to scrutiny of the governor’s record, both in regard to nursing homes but also as a forthright chief executive with a deference to facts.

That image has included the publication of a memoir about his work on the pandemic before it ended, offering “leadership lessons,” as well as his acceptance of an International Emmy award for the daily news conferences that he held early in the outbreak.

During the 90-minute news conference on Monday, Mr. Cuomo was asked if he apologized for his actions, and responding carefully in his words.

“Apologize? Look, I have said repeatedly we made a mistake in creating the void,” he said, explaining his main error as not providing a fuller account and thus allowing other narratives to propagate.

“We should have provided more information faster,” Mr. Cuomo said, saying that his administration was “too focused on doing the job and addressing the crisis of the moment.”

He conceded however, that “we should have done a better job,” adding that it caused “confusion and cynicism and pain for the families of the loved ones.”

“I take responsibility for that,” he said. “Total death counts were always accurate, nothing was hidden from anyone, but we did create the void. And that created pain. And I feel very badly about that.”