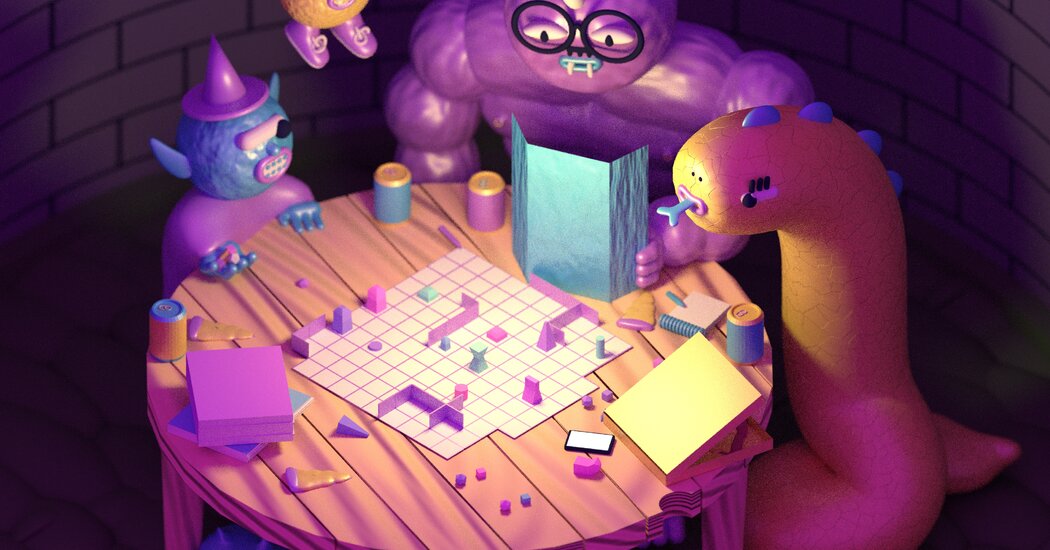 We had to get out of the house. My wife and two sons, ages 11 and 14, were dying for a bit of adventure, and there are only so many shows on Animal Planet that you can watch.

So I proposed a little outing to a tavern called the Licking Lizard. I would call it a dive bar, but that doesn’t quite do the place justice. It was more like a rogue’s lair.

For starters, no one was wearing a mask, not even the cook, a man with a clubfoot who went by the name Snot. He was stirring a rather repulsive-looking pot of stew. Some gnomish-looking fellows were puckishly playing a game of craps. You get the picture.

I glanced over at my younger son, Lucian, and was surprised to see that he was larger than I remembered: 7 feet 9 inches, to be precise. That’s because he was a Goliath, a member of a race of beasts whose bodies appear to be carved from stone.

Of course, we weren’t actually in this tavern, and not only because, well, no one actually goes anywhere anymore. The tavern was part of our game of Dungeons & Dragons. My childhood friend Micah Nathan was running the game as “dungeon master” remotely, via (what else?) Zoom, from Newton, Mass.

Our party was meeting up for the first time; our characters were just getting to know one another. My older uzunluk, Sebastian, was a clever rogue. Lucian was — well, in çağdaş parlance you’d call him a sociopath. Asked by the dungeon master whether he would stop to help a stranger from drowning, Lucian grinned malevolently and said no.

My inspiration to play this game, at least in part, came from a story that I’d evvel read about prisoners playing D&D. It made perfect sense to me, really: If you’re locked in a small cell for years on end, what better way to roam free? And it occurred to me that inmates might have valuable insights on how to best use the game as a means of emotionally surviving the challenges of lockdown.

So I reached out to Kevin Bruce, who recently finished serving 35 years in prison in California for second-degree murder. He was incarcerated at the age of 21, and his goal, from Day 1, was redemption. “It was all about, you know, making myself better,” he told me. In prison he got his G.E.D., took writing classes and even published some of his poetry. But in many ways, his real salvation was D&D.

Initially, Mr. Bruce faced a possible life sentence. Not long after he arrived, his cellmate invited him to join a D&D game with a group of mostly other lifers, all of whom were looking for a way to pass the time. Mr. Bruce opted to become an elf, though, by his admission, he had no idea what he was doing. One of the other players, a guy named Bill, struck him as especially arrogant and unhelpful. “I didn’t like him,” Mr. Bruce told me.

Then one night, the adventurers were all sitting around a roaring campfire — cue spooky, medieval harp music — when an owl swooped down and attacked Mr. Bruce. It turned out the owl was a nasty wizard. “It locked its claws into my face,” he recalled. That’s when Bill — in the form of a druid — suddenly stepped in and saved his life.

It was the beginning of a beautiful friendship, the sort, perhaps, that can be forged only under the cover of darkness, in a mystical land, where unlikely valor and benevolence can (and must) flicker to life.

Mr. Bruce and Bill eventually opted to become cellmates. They shared a tiny cell in Folsom State Prison. This was where Johnny Cash famously sang for the inmates, and immortalized it in a song, in which a prisoner hears the distant whistle of a train and imagines riding it away: “Far from Folsom Prison, that’s where I want to stay / And I’d let that lonesome whistle blow my blues away.”

The two cellmates envisioned a different kind of escape. Each of them had mapped out an imaginary land; amateur cartographers, they rendered their respective worlds on a patchwork of connected papers. When they put their two maps up on the wall side by side, they were delighted to discover that the borders of land and sea matched up almost perfectly, as if one had been a mere continuation of the other. They called this land Cathandaria.

Mr. Bruce told me they spent almost “every waking moment” in their country beyond the prison walls; the friends named lakes, rivers and cities, and the land grew and grew until the map covered almost all of the available wall space.

Sometimes, when Folsom would go on lockdown and the prisoners were forced to stay in their cells for long periods, it was almost as if the two of them actually lived in Cathandaria. They took turns playing dungeon master, and Mr. Bruce wrote about some of their adventures in novels that he completed while incarcerated.

Mr. Bruce created numerous characters while in prison. One of his favorites was a gnome named Praedo Rex, who flew around on a magical mop. Over several years, he said, he tricked out the mop with dragon scales and an “aqua lung” so he could ride it underwater. He says that Praedo was a version of his true self.

“His personality was identical to the way I am when I am at a party and I’ve had too much to drink — you know, like, when you let yourself go and you tell some stupid jokes,” he said. “Praedo was me with all the barriers down.” Not to mention, who needs Johnny Cash’s mythical escape train when, instead, you can rocket across the heavens on a squeegee?

The great thing about role-playing games is that — in addition to enjoying some fantastical travel — you get a chance to embrace another persona. As our family dived further into D&D, Sebastian played the role of the rogue to the hilt. He cheated me while playing cards, and later on, when we visited the home of the town’s mayor, he planned to steal the silverware. Needless to say, I was quite proud.

We tend to think of our coronavirus lockdown only in terms of the limits that it imposes on us, but Mr. Bruce’s story — and even my family’s visit to the Licking Lizard — shifted my viewpoint. In fact, one recent morning I heard Lucian chattering away in our dining room. I assumed he was on the phone with a friend, but when I walked in, I saw that he had a map on the table and several figures, each of which had a detailed profile written out on a corresponding index card.

Lucian was staging an elaborate play of sorts. I called his name, but he didn’t bother to look up. He was someplace else entirely, far, far away.

Jake Halpern is the author, most recently, of “Welcome to the New World,” based on his Pulitzer Prize-winning series in The Times.