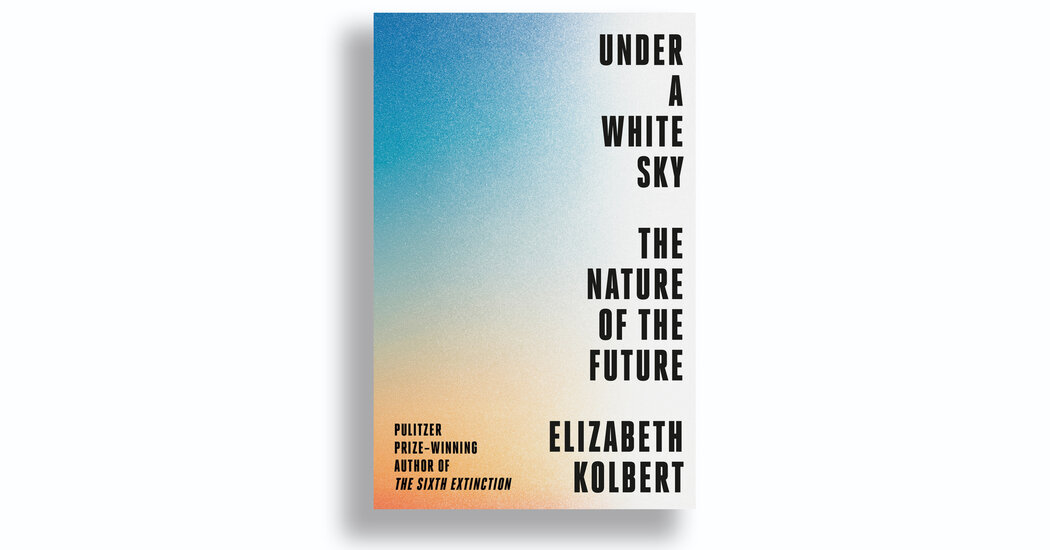 My spell-check program doesn’t recognize the word “Anthropocene,” underlining it in red, as if it’s a typo to be cleaned up and not a geological epoch to be grappled with.

The term refers to how humans have been so successful at changing the environment that we have become the dominant influence on the natural world. According to Elizabeth Kolbert’s new book, “Under a White Sky,” how we proceed is, in one sense, full of possibility, a test of our technological ingenuity and derring-do, but it also happens to be grimly determined in one irrevocable way. Leaving the natural world to repair itself isn’t an option anymore — or, at least, it’s not an acceptable one, considering the death and suffering that would inevitably ensue.

It’s as if we’re living through an enormous trolley sorun: Do nothing, and the runaway trolley will kill billions of people; or pull the lever and shunt the trolley to another track, where it will kill millions. Or maybe pulling the lever will cause the trolley to burst into flames and wreak all kinds of destruction that we hadn’t even considered before.

Our current predicament is the consequence not only of environmental exploitation — though there’s plenty of that. One of the ironies of the Anthropocene is how often humans have set out to solve one ecological sorun only to invite a new one. Kolbert opens her book with a section on the continual attempts to control the proliferation of Asian carp, a fish that was originally introduced to American waterways in 1963, a year after the publication of Rachel Carson’s “Silent Spring.” At the time, Americans were concerned about chemicals in the water, and the carp were supposed to offer a nontoxic way to keep aquatic weeds in check. But these carp also happen to be voracious feeders that, as Kolbert puts it, “outcompete the native fish until they’re practically all that’s left.”

Elizabeth Kolbert, whose new book is “Under a White Sky.”Credit…John Kleiner

“Asian carp are a very good invasive species,” an engineer tells Kolbert. “Well, not ‘good’ — they’re good at being invasive.” It’s a slip that captures the stakes uncannily well. It also suggests how Asian carp are, in one fundamental way, kindred species to our own. As Kolbert showed in her previous book, the Pulitzer Prize-winning “The Sixth Extinction,” humans can thrive in different environments, outcompeting other species and/or destroying whatever doesn’t suit us. From one vantage point (ours), we are “good”; from another, we are a catastrophe. Reading Kolbert, I was reminded of William Gass’s novel “Middle C,” in which the apocalyptically-minded protagonist keeps rewriting a version of the same sentence over and over: “The fear that the human race might not survive has been replaced by the fear that it will endure.”

Kolbert is a writer for The New Yorker, where parts of this book originally appeared. Her narrative voice is steady and restrained — the better, it sometimes seems, to allow an unadorned reality to show through, its contours unimpeded by frantic alarmism or baroque turns of phrase. The people she meets are trying to reverse the course of man-made environmental disaster, whether that might involve electrifying a river, shooting diamond dust into the stratosphere or genetically modifying a species to extinction. She says that the “strongest argument” in favor of some of the most fantastical sounding measures tends to be a sober realism: “What’s the alternative?”

The biggest and most urgent of the impending cataclysms involves climate change. Mitigation efforts — reducing emissions — won’t do anything to alleviate the greenhouse gases that are already trapping heat on our planet. The title of Kolbert’s book comes from one possible side-effect of “solar geoengineering” (or “solar radiation management,” in what’s supposed to be the less scary parlance). Spraying light-reflective particles into the atmosphere will make blue skies look white. One climate scientist keeps a running list of concerns about geoengineering. No. 1 is the worry that a disruption of rainfall patterns could cause drought in Africa and Asia. No. 28 is the philosophical quandary looming over it all: “Do humans have the right to do this?”

On the other side of the rights question is one of responsibility. Kolbert says that we, as a species, are trapped by our hubris. It’s hubris to think that we can do things like drive the Great Barrier Reef to collapse without suffering any consequences. But it’s also hubris to think that our ministrations will be what will save it. Some of the interventions she writes about don’t involve tinkering at the margins; they are huge, industrial-scale projects, Hail Mary passes whose success will require finely calibrated innovation and immense political will.

And who’s to say that we’ll do it in a way that’s not only effective but fair? The countries most responsible for cumulative carbon emissions are the rich ones, but getting to zero would require everyone to stop emitting, including those countries that have contributed almost nothing to the sorun. Visiting the shrinking Louisiana coast, Kolbert describes how the Biloxi and Choctaw had come there after having been dispossessed of ancestral lands in the east. They didn’t have a say in the dredging of the oil channels and the efforts to control the Mississippi River that accelerated erosion, “and now that new forms of control were being imposed to counter the effects of the old, they were being excluded from those, too.”

“The electric fish barriers, the concrete crevasse, the fake cavern, the synthetic clouds — these were presented to me less in a spirit of techno-optimism than what might be called techno-fatalism,” Kolbert writes in the last pages of her book. The overall sense you get after reading “Under a White Sky” is that as much as we fixate on technical issues, we have been trying to ignore the existential one. As Samuel Beckett put it in “Endgame,” “You’re on earth, there’s no cure for that.”