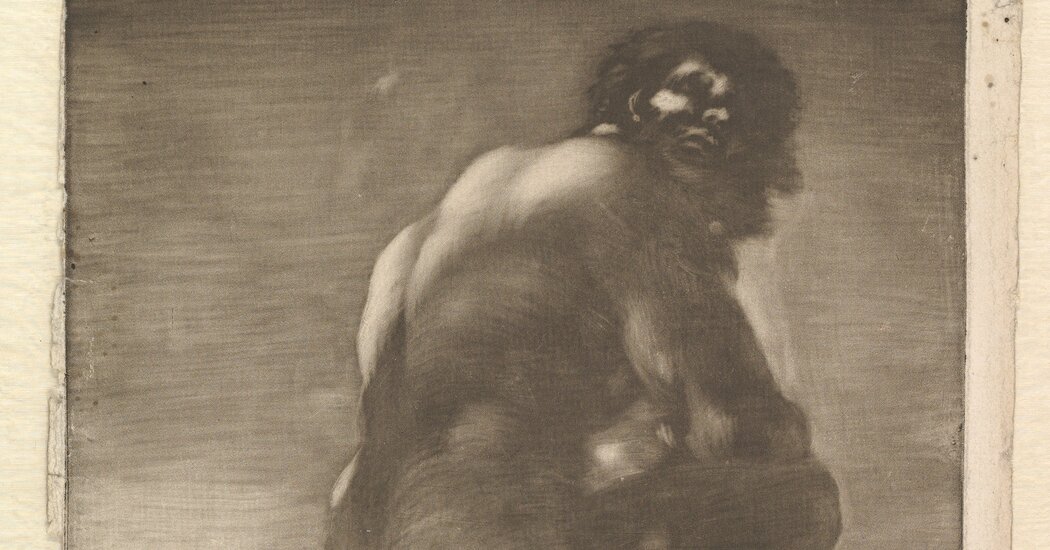 So much of our culture is bound in a straitjacket of our own fashioning: in a dull, uniform moralism, more occupied with saying the right thing than saying something well. It’s rooted, I’ve come to believe, in a fear of our own depths, and of what we’d have to admit about ourselves if we actually risked looking inward. What if you let your imagination roam? What if you just drew, or wrote, without fear of being wrong? What if you discovered that you are a great artist, but you yourself are not so perfect?

“Goya’s Graphic Imagination,” opening this week at the Metropolitan Museum of Arka, offers a vital tonic from an artist with (to our eyes) all the right political commitments: horrified by violence, revolted by unearned privilege, standing up for freedom and knowledge and rights for all. Those commitments, though, were worth nothing on their own — nothing without the free play of his unconscious, whose shadows cast all his liberal principles into doubt. Goya let those doubts take whatever form they would in drawings and in series of prints, above all the ironic “Caprichos” and ferocious “Disasters of War.” Here, in the privacy of the studio, an Enlightenment faith in human progress crashed into uncertainty, terror, bewilderment.

Francisco Goya (1746-1828) served as an official artist to the Spanish crown, and painted the Bourbon royals within the conventions of the day. His mature career, though, coincided with the bloodiest years in the country’s history: the Peninsular War (1807-14), pitting Napoleon’s occupying forces against three countries’ armies and bands of guerrillas. Spain would regain its independence, but under a capricious tyrant who presided over a campaign of censorship and arrests. Goya would leave the court, cover the walls of his country house with the tormented Black Paintings (now at the Prado in Madrid) and die in exile. The “Disasters” — his 82-print horror show of the Napoleonic occupation, the greatest antiwar arka ever made — remained unpublished for another three decades. 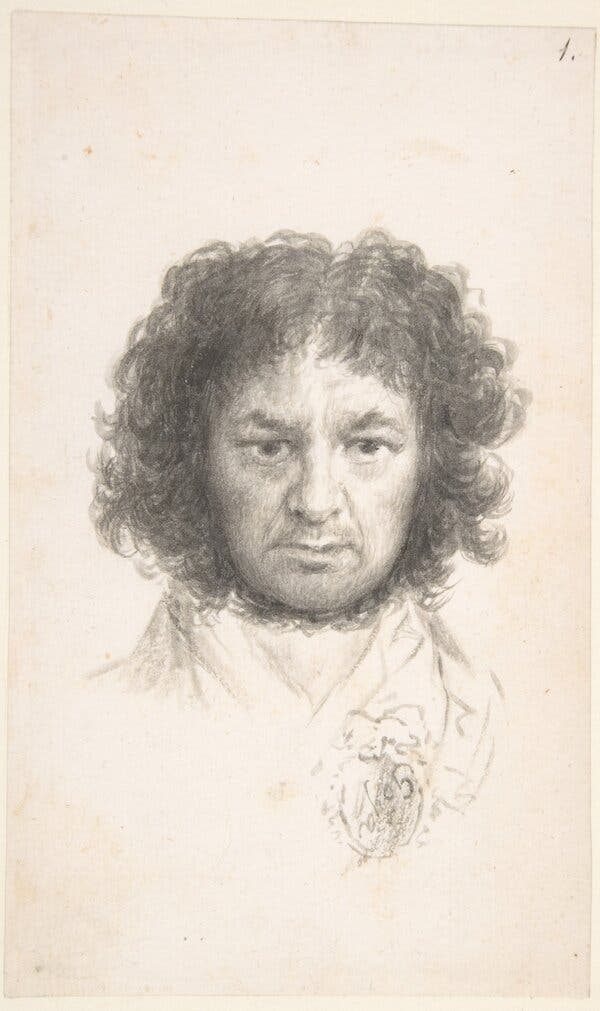 Goya’s self-portrait (c. 1796). A few years before, he survived a severe, undiagnosed illness that left him almost completely deaf.Credit…Francisco de Goya y Lucientes and The Metropolitan Museum of Arka

Though it arrives with a sizable catalog, “Goya’s Graphic Imagination” is an exhibition geared to beginners. Me, I’d take a larger show, with the full run of the “Caprichos” and the “Disasters.” (The Met owns complete sets of each print series.) As introductions go, however, this one is Gibraltar-solid. The Met curator Mark McDonald has cross-sectioned Goya’s drawings and prints into a judicious display of 100-odd sheets, hung with ample air. More important, he has not brought over from the painting wing Goya’s portraits of the Spanish aristocracy. The paintings are daytime Goya. Here we come to the province of the night.

We’ve made Goya into a useful archetype: the truth-telling liberal in an autocratic Spain, defender of reason, artist of the Enlightenment. Indeed he was those things. Yet Goya saw, and depicted with unrivaled vision, that error or evil can never be purged entirely, not from your society, nor from your soul. A world of perfect justice will always be a mirage. Tyrants, idiots, swindlers, conspiracy theorists: They will always be with us. And deep inside the chambers of our hearts — untouched by our rational skepticism, our faith in our own righteousness — remains an ineliminable darkness.

“A Court Jester, El Primo,” Goya’s print of Velázquez’s 17th-century painting of a court jester. The style hints at how Goya would reroute Velázquez’s naturalism into the realm of dreams.Credit…Francisco de Goya y Lucientes and The Metropolitan Museum of Arka

Goya was born in the provinces, and for years after his arrival in Madrid he barely scraped by. At 29, he secured a day job drawing cartoons for the king’s tapestry factory — but simultaneously, for the growing Madrid print market, he made etchings after Diego Velázquez’s vigorous paintings of a century before. Goya copied the older artist’s horseback riders and drunken revelers, but already his eye was tending to the strange, the ornery, the perplexing. His print of a court dwarf, a jester for King Philip IV, retains the humanity and sympathy of Velázquez’s original painting. Look at the dark, dense gashes of the background, though. You get a foretaste of the artist who would reroute his predecessor’s naturalism into the realm of dreams.

To err is human. At the turn of the century, Goya published “Los Caprichos” (or “The Caprices”), a suite of satirical and fantastical prints whose haunted, velvety grays evince his mastery of a new technique: aquatint printing. Their wry wit comes almost always with an ominous undertone, augmented by off-kilter titles that make them even more cryptic. Behold the wailing children, and the bogeyman their mother allows to terrify them. Rue the misfortune of two peasants, weighed down by ungrateful beasts. (Are the donkeys the nobility? The clergy? Actual donkeys?) While his soft paintings flattered Madrid’s counts and duchesses, in his notebooks and etchings he graphed Spain as a nest of folly.

The most famous of the “Caprichos” pictures a man slumped at his desk. He’s spent, to the point of unconsciousness, and he’s being hounded by a black cat, a lynx and wrinkled bats and owls. Written on the desk is a prime-time Enlightenment slogan: When reason goes, superstition thrives. This show, however, also has Goya’s first drawing for this key work, lent by the Prado — and here you can see, floating above the sleeping man, the artist’s own unmistakable face. (By this point, he had gone deaf, the result of some undiagnosed illness that nearly killed him.) Even the great liberal has unreason inside him. Your knowledge and your prejudices can’t be cleaved apart so easily. And to create an enduring work of arka, you will have to brave the monsters.

“For wagging his tongue in a different way” (c. 1808-14), one of many drawings Goya made of the Inquisition.Credit…Francisco de Goya y Lucientes and Museo Nacional del Prado, Madrid

Around 1800, with the “Caprichos” behind him, Goya started to draw the cruelties of the Inquisition, which Spanish liberals were crusading to abolish. The drawings ended up filling nearly a whole album. They depict Jews, Protestants, scientists, freethinkers, unmarried women and, in this case, a foreigner — his back turned to us, but highlighted in darker ink against the washy browns of the tribunal. The accused (who, the title suggests, does not speak Spanish) wears two garments of shame: the coroza, or conical çizgi, and the sanbenito, a bib inscribed with his supposed crimes. Prisoners, torture victims, the insane: Goya’s prints and drawings repeatedly sympathize with their plight, and expose those who cloak their corruption in righteousness. Beware the sleep of reason; beware, too, the merchants of morality.

“And there is no help,” from “The Disasters of War” (1810). Goya etched the series during the Napoleonic occupation of Spain, but never published it.Credit…Francisco de Goya y Lucientes and The Metropolitan Museum of Arka

Goya was no revolutionary. He remained a court painter when Napoleon planted his brother on the Spanish throne in 1808. But his heart was with the resistance, and in the “Disasters,” etched in private, he gave view to an unending tide of butchery. The Met’s show includes a dozen of these utterly grueling sheets, including this one: a Spanish rebel, slumped and blindfolded, faces an undistinguished death like his comrade on the ground. (Observe the three rifle barrels on the right edge, picked out from the harshly etched sky.) Unlike his heroic “The Third of May,” his mural of an execution in Madrid, the “Disasters” are devoid of martyrs. The dead are ragged, dishonored, mutilated, starved. The soul is a thing forgotten, and we are left only with the body in pain.

“Truth has died,” one of the last prints from “The Disasters of War.”Credit…Francisco de Goya y Lucientes and The Metropolitan Museum of Arka

Now “The Disasters of War” are held up as images of universal suffering, still dreadfully relevant. But Goya was etching a particular war, waged against his country by the most powerful army in Europe. He was still working on the series when the reactionary Ferdinand VII returned to the throne and re-established absolute monarchy and the supremacy of the church. In this allegory, the radiant figure of Truth is headed for a shallow grave. In the shadows, a bishop and two monks hasten to bury her. To nourish a war you need a diet of lies.

“Dreadful events in the front rows of the ring at Madrid and death of the mayor of Torrejón,” a drawing in red chalk from 1816.Credit…Francisco de Goya y Lucientes and Museo Nacional del Prado, Madrid
The same subject, etched for Goya’s “Tauromaquia” print series, pares down the composition to a single tangle of violence.Credit…Francisco de Goya y Lucientes and The Metropolitan Museum of Arka

The year 1814 comes, and Napoleon abdicates. At last, the war is over. Goya turns to a subject only superficially lighter: bullfighting. He drew triumphant matadors and charging beasts, but the greatest of this “Tauromaquia” series is the worst to behold, and depicts a real catastrophe of a bull jumping into the stands. (Goya may have witnessed it.) Spectators crowd the initial drawing, but when he etched it Goya left three-quarters of the image blank, to set off the pile of corpses. The bull has gored a politician: another impaling. Hard not to see these bullfighting works as a coda to the “Disasters,” an allegory of a country pitted by fear.

“A Way of Flying,” from the “Disparates” series, also not published during Goya’s lifetime. He produced his rich blacks and grays through the aquatint process, which involves coating the printing plate with powdered resin.Credit…Francisco de Goya y Lucientes and The Metropolitan Museum of Arka

He grew more and more outraged at the repression and censorship of the Bourbon Restoration, even as he collected his paycheck to paint a king he hated. In those dark years, Goya began — though never finished — an enigmatic series now known as “Los Disparates,” or “The Follies.” Larger than the “Caprichos” and “Disasters,” gloomier, creepier, these prints of disorder and confusion have the look of half-coherent nightmares. (He also finished the related, incredible “Seated Giant,” its strangeness accentuated by the modulated gray background he produced through aquatint.) These five men in bird costumes, flapping like crazy to stay airborne, are icons of human progress or human delusions: Who can say which, and what if they’re the same?

“Telegraph,” a drawing of a street entertainer from Goya’s last album, may record a scene he saw during his exile in Bordeaux, France.Credit…Francisco de Goya y Lucientes and Museo Nacional del Prado, Madrid

At last he can take no more. In 1824, on the pretext of health treatments, Goya secures permission to leave Spain. Exiled in Bordeaux, he draws in his last album a street entertainer, perched upside down on a rickety table. Stray lines of black crayon evoke the slight kicking of his legs. Someone watches in a hastily sketched shadow. The one-word title, “Telegraph,” is a head-scratcher, but it does suggest that Goya, at 78, had not given up on better things in the future. We are acrobats, leveling up through training and practice. We accomplish great things. We are always on the verge of falling over.