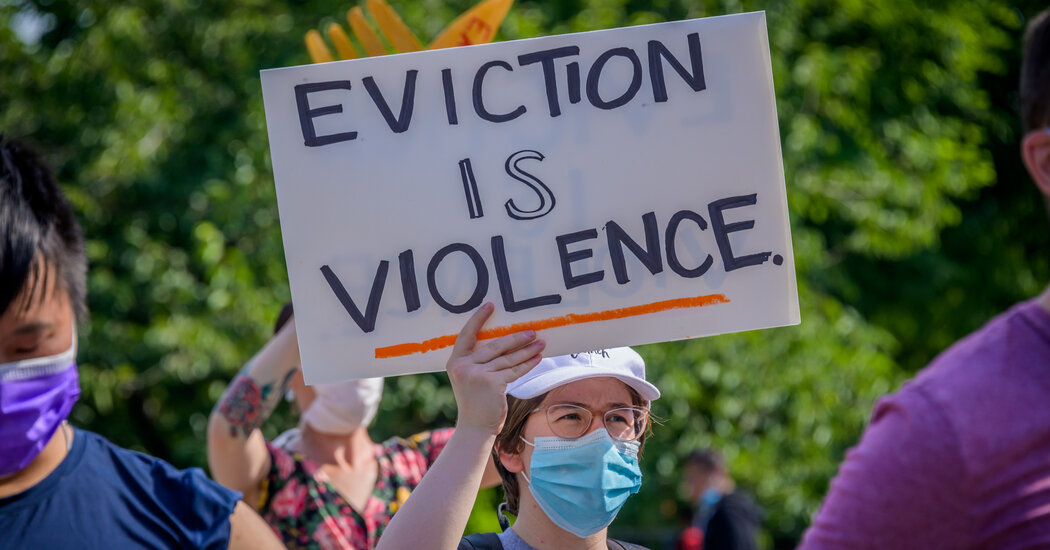 “Housing is a right in America,” President Biden said last month as he signed an executive order promising to address racial discrimination and inequality in housing. On Tuesday, the administration announced an extension of the federal foreclosure moratorium through the end of June.

While this temporary measure is a necessary Band-Aid on a gaping economic wound, housing is not yet a right in this country — far from it. Mr. Biden’s emphasis on redressing racial inequity in housing provides a welcome contrast, though, to the long history of the federal government’s housing policies, which created barriers to safe, affordable housing in all 50 states, especially for communities of color.

Of course, the American housing crisis long predated the pandemic, and the United States has never made the provision of housing a national priority. The crisis has only been compounded during the last year: Somewhere between 10 and 40 million people may be at risk of eviction in the coming months, in a time of deep racial inequity, volatile personal incomes, a surge in small business failures and diminished public access to many government benefits.

Mr. Biden’s speech points to a pathway out. In a moment of economic upheaval and fragility, there is an existing program that can help. Housing vouchers offer the potential for a solution to the residential instability and deep inequity in our country. Housing assistance can help stabilize communities that have been hard hit by generations of racially predatory practices like redlining and disinvestment. Expanding housing vouchers to everyone who needs them would be a key step toward recognizing the role that stable housing plays in life outcomes from health to employment and education.

Currently, the Housing Choice Voucher Program, formerly known as “Section 8,” helps more than 2 million households keep a roof over their head. Funded by the Department of Housing and Urban Development, vouchers offer a ticket to safe, affordable housing, reducing homelessness and alleviating overcrowding. Yet they aren’t used as much as they could be: Only one-quarter of those who qualify for housing help get it. Marcia Fudge, the new secretary of HUD, knows that the logic is clear for scaling up vouchers with the goal of improving affordability.

Economists like Raj Chetty hold a secondary hope for the program: social mobility. Vouchers can offer the chance to move to new places — out of the disadvantaged neighborhoods to which subsidized renters have long been tethered. In theory, the private market can offer recipients homes in safer neighborhoods, with better schools and jobs, paving a pathway out of poverty. In this way, policymakers hope vouchers might even be able to remedy the concentrated poverty and segregation that previous policies helped create.

But like school vouchers — which conservatives have long championed as a preferred policy to promote choice and better educational outcomes, despite veri that suggests otherwise — housing vouchers, as they currently operate, are based on a flawed premise: that given the option, people can and will make the “right” choice. The truth is that “right” choices are often unavailable.

Take Edie, whom I met during my fieldwork in Baltimore. For Edie (this is not her actual name; the terms of my research protocol prevent me from using even an initial to describe her), getting a housing voucher after years on the waiting list was like winning the lottery. Edie works as a shampooer at a hair salon in her neighborhood. Instead of handing over most of her meager paycheck to her landlord each month, she would now only have to hisse a third of her income in rent — a long held rule of thumb for “affordable” housing. The federal government would hisse the rest. Her excitement faded quickly though, as landlords turned her away from the neighborhoods she wanted to live in. “No vouchers here,” they told her again and again.

In our current model, vouchers do not provide much social mobility. Many renters are unable to make the kind of move that has long been intuitively understood — but only recently definitively shown — to have long-term positive impacts on health, graduation rates, marriage rates and lifetime earnings. In cities like Baltimore, more than 90 percent of voucher holders are Black. Like Edie, many voucher holders of color end up in neighborhoods that are poorer and more racially isolated than those of white voucher holders. Housing vouchers, in other words, often mirror familiar residential patterns of racial segregation.

One big reason for this is the role that landlords play. In my research in Baltimore, I met dozens of renters like Edie who enjoy few kanunî protections against landlord discrimination, too often making the voucher program a blunt tool of unfulfilled promise. Landlords have incentives to keep voucher holders out of affluent white neighborhoods, while enticing them to poor neighborhoods where vouchers offer a viable alternative to the volatility of the low-income housing market (because the majority of voucher tenants’ rent is paid directly by the housing authority each month).

One landlord, David (also not his real name), was so desperate for the reliability of voucher tenants’ payments, that he would wait outside the voucher office on Pratt Street to catch new recipients on their way out the door. He would give them a ride to see his vacant properties in a low-income neighborhood called Park Heights, in northwest Baltimore, offering move-in cash bonuses as enticements.

Policymakers too often assume that vouchers operate in an idealized market that provides information and real choice to tenants. This is an unhelpful fiction. The reality is that private landlords have the upper hand and game the system, shuttling voucher holders to disadvantaged neighborhoods where there is the most profit to be made, perpetuating economic and racial segregation.

Like school vouchers, housing vouchers are a market-based solution that can reproduce and even disguise unequal outcomes. Any program to scale up housing vouchers should ensure that tenants have real choices: Congress should pass a federal law — like those that currently exist in a handful of states — preventing landlords from rejecting tenants simply because of their voucher, something that is all too common for renters like Edie. This is key if we want participation from landlords with properties in more affluent neighborhoods, rather than just those in areas like David’s. But mandating voucher acceptance won’t work if we don’t also adjust the financial incentives: We need to expand a program that currently operates in a only a handful of cities that provides higher-value vouchers in higher-cost neighborhoods to avoid overpaying landlords in poor neighborhoods and underpaying them in more expensive ones.

We also need to get serious about creating incentives for new housing infrastructure construction to improve the house-hunting prospects for voucher holders. This could be a boon to the economy more broadly, the likes of which we have not seen since the New Deal. And finally, although this almost goes without saying, vouchers can’t solve every sorun. Reforming the voucher program should be paired with investments in long-neglected areas as part of a multipronged approach that would also include investing in poor and disadvantaged neighborhoods while preserving affordable housing.

While housing is not yet a right, President Biden — who campaigned on a platform proposing what are known as universal housing vouchers — could change that. And though Republicans and Democrats embrace vouchers for different reasons, perhaps a middle ground can be found in using market-friendly policy to address housing instability. With some key reforms, universal housing vouchers have the potential to stabilize the housing market and keep small landlords afloat, while simultaneously offering extra protections to those tenants who need them.

Housing voucher expansion would also help Americans overcome a host of problems exacerbated by the pandemic, providing a true safety net for those most in need, mitigating the worst economic and social impacts of this crisis — and those that are to come. In doing so, we can do more than acknowledge our nation’s long history of housing discrimination. We might also find the political will to remedy it.

Eva Rosen (@evarosen) is the author of “The Voucher Promise: ‘Section 8’ and the Fate of an American Neighborhood” and an assistant professor at Georgetown’s McCourt School of Public Policy.