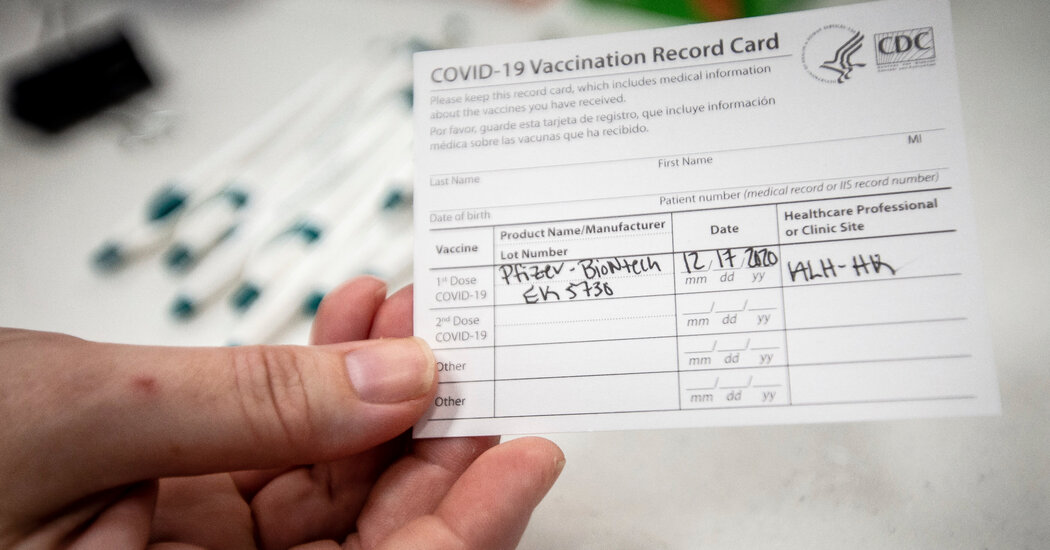 AUBURN, Ala. — About three weeks ago, I received my first dose of the Moderna Covid vaccine. I sat in the cavernous upper floor of the old basketball arena at the university where I teach and waited for 15 minutes afterward, along with colleagues and friends I barely recognized because we were masked. My husband was vaccinated three days earlier. The vaccine operation itself, efficient and organized (I was in and out in 20 minutes), still had a small-town feel: The director of the medical clinic, who is married to the director of my son’s school, wandered in and out of the rows of the newly vaccinated, asking how we were feeling.

I’m 39 years old, with no conditions that make me high risk. I was vaccinated before my parents, who are 65; before my in-laws, who are over 70, both high risk. Before a Facebook friend who lives in Colorado and who is twice a double-lung transplant recipient and has cystic fibrosis, and cancer because of the immunosuppressant drugs she will be on for the rest of her life. My friend is required to be in a hospital for treatment, and yet she has no idea when she will be vaccinated.

It’s a matter of luck that I work for a university that received doses and is administering them quickly. It’s also a matter of luck that the university got through the high-risk group first, then on to me. I have many friends who work at universities in other states and have had no such luck. “Maybe I should move to Alabama so I can get vaccinated,” a friend said, and we both laughed, because no one would have guessed that working at Auburn University in Alabama, a state not known for rigorous public health measures, would put you at the front of the vaccination line.

I wished I could have given my vaccine to my father; I briefly, unseriously considered it, since our names are different by only three letters. That he’s a man and I’m a woman gave me pause. Instead, I sat in the chair and waited while a young woman measured a dose and unceremoniously jabbed it into my arm; later I saw that my bandage was covered in tiger stripes, in honor of Aubie the Tiger, the university’s mascot.

I took my bit of luck and felt guilty but mainly relieved that I have so far made it through this pandemic without getting sick, without anyone I love getting sick, and was now receiving the vaccine. It’s the way I’ve felt since the beginning: lucky that I didn’t have a job that required me to be face to face with the public; lucky I could keep my children home; lucky, in essence, that we had enough money to secure ourselves against the world.

I’ve long known my life is easier because of factors beyond my control, factors that influenced my mother’s pregnancy, and her mother’s. I’m a mother now; I know I was treated a certain way during my pregnancy and delivery because I am white, because I have health insurance, because I am married. I live an hour away from Julia Tutwiler Prison, where imprisoned women give birth and then say goodbye to their infants.

I told an old friend that Covid had exposed a lot of flaws in this country’s higher education system; it’s exposed a lot of flaws everywhere, he said. A few Sundays ago at Dunkin’ Donuts, I saw a white woman with her daughter, both dressed for church, both maskless, and I felt a rage so pure and immediate, it seemed to disturb the air. In the early days of the pandemic, our hospital begged people not to go to church, where most of the cases seemed to be contracted. Mighty Christian of you, I thought, but said nothing, because it would do no good, because I was afraid if I said anything, I would lose my mind.

Even in the early days of the pandemic here, no one knew what would happen. The world felt perilous, and on certain days it tilted even further. First, a preschool classmate of my son’s was lost in the woods, a tall, red-haired girl who shares a birthday with me. The news was everywhere. Hundreds of volunteers combed the forest looking for her. She was found behind her house unharmed two days later. It would have been so easy for her to have been lost forever.

In October, as cases were spiraling out of control, a different preschool classmate watched as his father was murdered and his mother was stabbed dozens of times by a renter who had lived with them. I remember the uzunluk well, and his father too, who each morning guided his son to the door of his classroom, said goodbye. Like all the other parents.

It’s hard not to think that the woman I saw in Dunkin’ Donuts cares less about Covid than she would if it had affected communities like hers as violently as it has affected Black and other minority communities. The former N.B.A. star Charles Barkley, an Auburn alumnus, said that athletes should be vaccinated first because they hisse so much in taxes, and while at first I was horrified by his comment, pretty soon I wasn’t. He was just saying what has long been true in this country: Your health is worth what you can hisse for it.

It’s hard not to think that I would have heard more about the horrific murder of my son’s classmate’s father if they weren’t all Chinese, including the killer. A friend posted on Facebook that the story hadn’t received much coverage. Maybe we didn’t know where to look, or maybe we would have learned more, and faster, if the family had been white.

Hard not to seek out a glimpse of the red-haired girl who went missing when I drop off my son at his school every morning. I’m mühlet she will one day learn of the news stories and frantic search that followed her absence; I wonder if she will ever comprehend the terror and awe she inspired.

Hard not to think about how some of us are found, some lost forever.

My arm was terribly sore for a day. My husband felt feverish. And just like that, after months of fear, months of waiting, it was over. For some of us.

Anton DiSclafani is an associate professor of creative writing at Auburn University and author of the novels “The After Party” and “The Yonahlossee Riding Camp for Girls.”