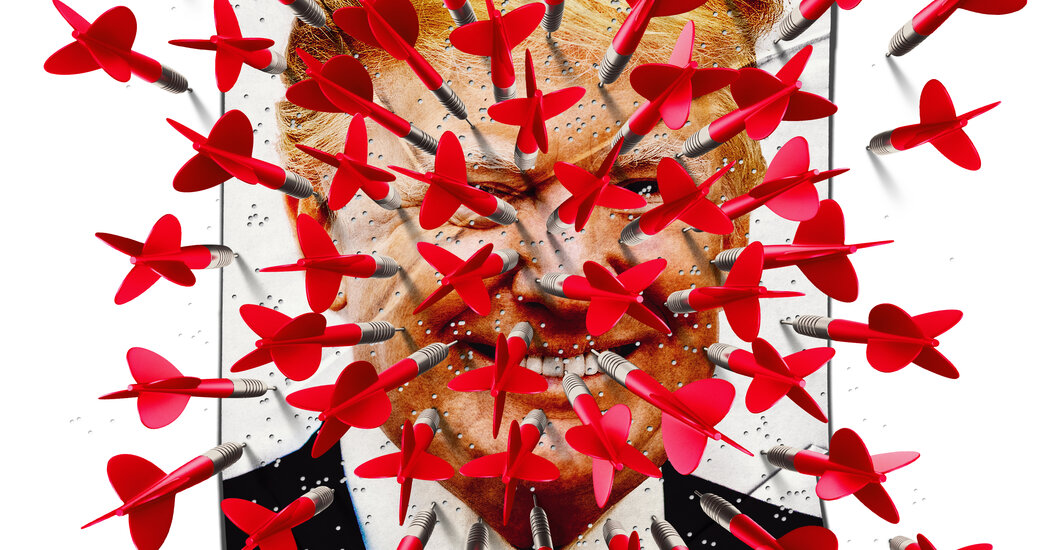 My credentials date back to Dec. 15, 1983, when CNN sent me to cover a public forum featuring the moguls of four New York sports teams. One of them, the newly minted proprietor of the long-forgotten New Jersey Generals, got up and spoke interminable nonsense for what felt like 20 minutes.

As I finished recording one-on-one interviews with the three other owners, George Steinbrenner, Sonny Werblin and Fred Wilpon, he emerged from the darkness and began answering questions into my microphone before I asked any. He repeated his boasts of future glory, but this time he mentioned an entirely different set of coaches and players than he had from the podium. As we helped the crew pack up to head back to our newsroom, I said to my equally flummoxed producer, “What the hell was wrong with that Trump guy?”

I have some seniority on this topic.

I was there nearly at the beginning of the Great Hate, I have twice quit lucrative sinecures in sports to create pro bono görüntü series warning against Mr. Trump, and now I am here with everybody else watching “Impeachment in Absentia” and wondering if we will ever get the opportunity to exorcise the enmity.

As obscenely insufficient as it sounds, the only real consequence of this second trial might be the unofficial termination of Mr. Trump’s political life. Senator Lisa Murkowski’s tepid Wednesday guess — “I don’t see how Donald Trump could be re-elected to the presidency again” — might be the closest thing to a tangible result.

Far more than the outcome of the trial was predetermined: Anybody on either side could have mapped the play-by-play with precision. Whomever you support, it has gone exactly as you expected it would.

Mr. Trump’s lawyers, who seemingly rotate as frequently and stumblingly as those imaginary football stars and coaches he told me he would steal 38 years ago, have fabricated the useful phantasm of “unconstitutionality.” It has provided Republican senators with an excuse to watch görüntü of themselves and their colleagues nearly being captured and killed by a mob, and yet still say that was truly horrible but it’s just a shame we don’t have jurisdiction against an ex-president and oh by the way didn’t those impeachment managers do a great and solemn job and see I said something kaç about Democrats therefore I’m for unity unlike that Biden guy.

If that’s all we get, what happens to the hate?

Since 2015, we Trump haters have at least structured this calculation in our mind: If he would just disappear, we might call it even. The baseline human want created by Trump Ubiquity has been the discontinuation of Trump Ubiquity. Even Mr. Trump’s own campaign post-mortem indicated that beyond the pandemic bungling, his loss owed in part to the sheer exhaustion of his voters.

But the more important need is one that moves along a very wide spectrum from revenge to prosecution to justice, to be enacted in public and on television, with both his henchmen and our battered psyches as witnesses. This itself has to some degree been precluded by the absence of the star witness. Not only did Mr. Trump remain in exile at Elba-Lago, but he was smart to do so. His attorneys needed to stick to their one-word script, and as may have come to your attention, Mr. Trump does not.

Yet we too are sticking to a script, as celebrants in the impeachment managers’ bid to win the hearts and minds of jurors who have not shown ownership of either. Mr. Trump may have railed against it and had his surrogates fight it, but the trial has given a new spotlight to an attention addict whose rehab was not going well. He is not there, but this is still “The Impeachment of Donald J. Trump,” about Donald J. Trump, featuring applause for Donald J. Trump, and starring Donald J. Trump as Donald J. Trump. His ego and his coffers need you to watch, to tweet, to rage.

So do you not watch, to enlarge the collective spiting of him? Do you give oxygen to an amoral human torch? The Resistance did not create or empower Mr. Trump. But we did make the classic first mistake of concluding that our insights, analysis and morality would convince his supporters that they were tragically wrong. When that failed, we made the classic second mistake of assuming we hadn’t made our first mistake loudly or clearly enough. I’m not ready to believe that we started it, but I, for one, have gotten loud and blasphemous enough to peel the paint off my walls.

Still, we cannot underestimate the power of righteous and organic hatred to overwhelm everything else. It is hard to fathom now, but in the epic sitcom “All in the Family,” one of the best running jokes consisted entirely of Carroll O’Connor’s Archie Bunker getting in the face of Bea Arthur’s Maude Findlay and announcing the identity of the worst president in history. He would elongate it and he would mispronounce it and when he would intone “Fraaaaanklin. Delllllano. Roooooooosevelt!”; she would erupt in paroxysms of liberal rage at his heresy.

These political passion plays were performed some 25 years after Roosevelt died, and were thus a real-time testament to something the half century since has erased: Beloved and revered as he may have been, F.D.R. was also passionately hated and blamed, and his memory alone could start political fistfights into at least the 1970s.

One wonders if the visceral hatred of Mr. Trump will end that soon. Or if it ever will.

Just as I have far more history with Mr. Trump than I would have wished, I also have some standing on the subject of people consuming political Soylent that they clearly don’t like, don’t want to see, and don’t want to eat.

At roughly this time of year in 1998, I was at the Harika Bowl on assignment for NBC and also doing a week of celebrity-themed shows for my little niche, boutique, offbeat news hour on MSNBC. We were all set up to interview John Lithgow in front of the refrigerator in the kitchen set of “Third Rock From the Sun” when my producer advised there had been a slight change in plans: I would instead be interviewing Tim Russert via satellite from Washington, because the president might be resigning over his relationship with Monica Lewinsky.

Our audience first doubled, then trebled. The heady, news-packed and unpredictable early days of the show we subtly renamed “White House in Crisis” made for compelling viewing. Then came an enormous cloud of the kind of illogic which may apply to whatever follows Mr. Trump’s second impeachment trial.

Weeks would unfold without a substantive journalistic development of any kind. The ethical corner-cutting of those chasing President Clinton became more obvious and more unsettling. It was not only disgusting — it was boring.

The audience quadrupled. I began to openly disparage the narrative, the Republicans, and our own coverage of it. The audience quintupled. I began to plead to be released from my contract so I could go back to sportscasting. The audience octupled. All the evidence from focus groups to viewer surveys to mere anecdotes indicated that the viewers hated every minute of the story but felt they could both indulge their guilty addiction to its news, and also be absolved, by hearing it from a guy who felt just as slimy saying it as they felt slimy hearing it. I escaped a month before the trial. The ratings endured.

Then President Clinton was acquitted, and the ratings collapsed so badly that over the next four years MSNBC changed its lineup for my old slot 17 times. And then, rather improbably, I was brought back on the 18th to do the “Countdown” series.

What kind of ratings — TV and cultural — will the post-impeachment period produce? The most compelling television political coverage ever was either of the Army-McCarthy hearings of 1954, or of the Senate Watergate Committee hearings of 1973. The latter probably wins for its longevity and plot twists. But both provide a template if any of our leaders actually want to indelibly burn into the retinas of history the full story of the insurrection.

No matter how much you or I might think the anti-Trump side is right, these earlier investigations were not choreographed and nearly scripted exchanges between accusers and excusers. And they did not begin and end with görüntü packages of the incitements and the crimes, no matter how searingly effective and unforgettably produced they might have been.

The McCarthy and Watergate hearings were unfocused, exploratory and certainly organic investigations. The revelations, the shock, the urgency of action and the opposing camps were slowly built, not built-in.

Would the hate be better addressed and the nation be better served by a long and meticulous public investigation into the attack on the Capitol or even the entire Trump presidency, shaped something like the Watergate hearings, the Army-McCarthy hearings and the 9/11 commission? Or are the wounds too new to be thoroughly reopened? If we’d had television and Ken Burns then, would his “The Civil War” documentary have been a must-watch in 1866? Of course, there is already historical revisionism about Mr. Trump and the Jan. 6 conspirators. Any sense that we might be too quick to relive the nightmare must confront the reality that the proverbial first draft of history often becomes the final version with only minor edits.

Ultimately, if this latest spasm in the greatest-ever threat to democracy doesn’t ease the hate, it will not be because we who loathe Mr. Trump are exhausted or traumatized or healing. It may be because even if 17 Republican senators were now to shock the world, there’s really nothing they can do to Donald Trump that we would feel would suffice.

The only thing we actually want to watch is the criminal trials. In which case, the worldwide popcorn shortage might be an extinction-level event.

Keith Olbermann (@KeithOlbermann) is a journalist, writer and broadcaster.