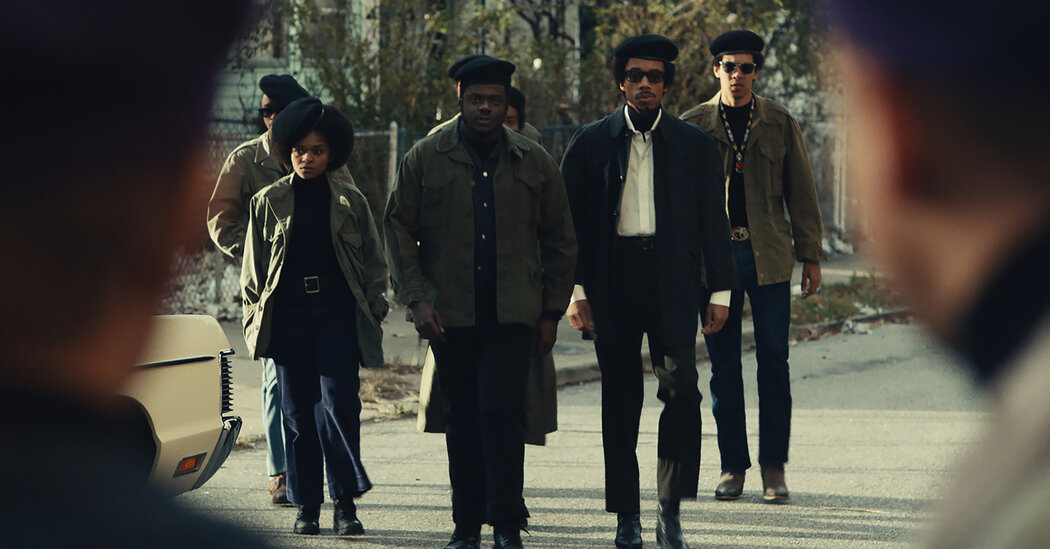 “I was in the struggle.” That’s Bill O’Neal’s summary of his participation in the radical Black politics of the late-1960s, delivered a bit defensively and with emphatic disdain for those who stayed on the sidelines. It’s an odd way to describe the dual role he played, as head of security for the Black Panther Party in Chicago and as a paid informant for the F.B.I. If he was in the struggle, there must also have been quite a struggle in him.

O’Neal, played by Lakeith Stanfield and glimpsed briefly in documentary footage, is one of the title characters in “Judas and the Black Messiah,” Shaka King’s deriyse, methodical historical drama. O’Neal’s counterpart — the target of his betrayal and of the government’s lethal hostility — is Fred Hampton, deputy chairman of the Chicago Panthers.

The phrase “Black messiah” doesn’t reflect romantic revolutionary hyperbole, but rather the paranoia of J. Edgar Hoover (Martin Sheen), who saw African-American militants as the gravest internal threat to national security and feared the emergence of a popular, crowd-inspiring national leader. As Hampton, Daniel Kaluuya takes up the burden of incarnating and exorcising both the monster of Hoover’s imagination and a martyr of the Black Power movement. He more than meets the challenge of uncovering the striving, doubting, thinking person underneath those myths.

Hampton was just 21 when he was killed in a police raid on Dec. 4, 1969. That’s not a spoiler, just history, and I’d argue that knowing his fate in advance is crucial to an appreciation of “Judas and the Black Messiah.” Though it plays at times like a crime thriller — with stakeouts and shootouts, chases and interrogations — the movie is better understood as a political tragedy. The script, by King and Will Berson, is layered with ethical snares and ideological paradoxes, and while King’s fast-paced direction doesn’t spare the suspense, it also makes room for sorrow, anger and even a measure of exhilaration.

Jesse Plemons and Lakeith Stanfield in “Judas and the Black Messiah.”Credit…Warner Bros.

O’Neal’s duplicity — and Stanfield’s twitchy, vulnerable, quick-witted performance — is the engine that drives the plot. He starts out as a car thief whose methods include occasionally impersonating an F.B.I. agent. After he’s caught, an actual agent, Roy Mitchell (a sly, phlegmatic Jesse Plemons), makes O’Neal a classic unrefusable offer. He’s instructed to go to meetings, collect information and get close to the Panther leadership. The rewards include steak dinners, top shelf liquor and envelopes full of cash. The penalty for noncooperation is prison. The Faustian fine print involving the disposition of his soul is implicit.

And that soul — a sense of his conscience, his politics and his inner life — remains just out of reach. O’Neal’s ambiguous motivation, his struggle to align the contradictory pieces of his identity, or at least to survive their inevitable collision, poses two kinds of sorun. He’s a puzzle that the filmmakers, for all their skill and dexterity, don’t quite solve. We observe his behavior — warily tangling with Mitchell, currying Hampton’s favor, putting on a brave, belligerent face with other Panthers — but there’s something blurry about him, like a figure in the background of an old photograph.

Which may be true to life. And it may also be that the filmmakers intentionally kept O’Neal at arm’s length. Villains have a way of stealing the spotlight from heroes. It would have been easy to make Judas a more interesting and complicated character, while painting the messiah in broad, pious strokes.

That isn’t what happens. If O’Neal’s treachery provides the momentum, Hampton’s charisma is the ballast, but Kaluuya presents him as something more than a simple saint or hero. During the Great Migration, Hampton’s parents had moved to Chicago from Louisiana, and Kaluuya, who is British, finds inflections of Southernness in his voice and manner — undertones of humor and courtliness, an appreciation of the expressive possibilities of language.

Deborah Johnson (Dominique Fishback), a fellow activist who becomes Hampton’s lover, calls him a poet, and his gift for oratory is much in evidence. It’s all too easy, though, to treat history as a series of speeches: The movies love nothing so much as a great man in front of a crowd. This movie, commendably, has a deeper understanding of politics, and a more sophisticated argument for Hampton’s importance. To borrow a term from Antonio Gramsci, he’s an organic intellectual, a thinker as well as a strategist and organizer.

And not, interestingly enough, a Black nationalist. Early in their courtship, Johnson scolds him for dismissing political symbolism and cultural expression. He is not interested in Africa, or in renaming schools and streets after Black heroes. He’s a Marxist-Leninist, with a bluntly materialist understanding of the American system. If he’s trapped in a burning building, he says, “my culture is water and escape.”

He tries to forge alliances with people who might share that culture, seeking out the leaders of Black and Puerto Rican street gangs, and a group of poor whites who meet in front of a Confederate flag. At the same time, tensions between the Panthers and the Chicago police flare into violence, with fatalities on both sides. The F.B.I.’s counterintelligence program sows suspicion within the Panthers, and some of Hampton’s friends urge him to flee to Cuba or Algeria. O’Neal discovers that he isn’t the only informer in the group, and that the Bureau and the movement are increasing their demands on his time and commitment.

“Judas and the Black Messiah” represents a disciplined, impassioned effort to bring clarity to a volatile moment, to dispense with the sentimentality and revisionism that too often cloud movies about the ’60s and about the politics of race. It’s fascinating in its own right, and even more so when looked at alongside other recent movies.

I have in mind, for starters, Sam Pollard’s documentary “MLK/FBI,” about Hoover’s earlier obsession with the Rev. Dr. Martin Luther King Jr.; Regina King’s “One Night in Miami,” about Malcolm X’s meeting with Cassius Clay, Jim Brown and Sam Cooke; and some of the chapters in Steve McQueen’s “Small Axe” cycle, about Black politics in Britain in the ’70s and ’80s. These movies don’t add up to a comprehensive picture of the past, but together they make a strong case for the vitality of historical filmmaking in yet another era of political crisis. They provide diversion and food for thought. Water and escape, you might say.

Judas and the Black Messiah
Rated R. Running time: 2 hours 6 minutes. In theaters and on HBO Max. Please consult the guidelines outlined by the Centers for Disease Control and Prevention before watching movies inside theaters.