About a year ago, Margaret Muir, an agent with William Pitt Sotheby’s International Realty in Madison, Conn., was bemoaning the state’s lackluster housing market and a population on the decline. “More people were leaving my beautiful Connecticut than moving in,” she said.

Then came Covid-19, and like so many other areas of Connecticut, Madison and neighboring towns on the state’s southern shoreline were suddenly swarming with buyers newly freed to work at home, away from city centers. The frenzy hasn’t stopped.

“I’ve never seen the inventory so thin,” Ms. Muir said. “Sadly, it was a pandemic that turned the market around.”

Mike and Natalie Concannon, both 32, moved to Madison from Summit, N.J., last July, not long after learning they were expecting their third child. Mr. Concannon, who works in sales in the consumer products industry, grew up in Madison and has fond memories of the charming downtown, the Surf Club waterfront park and the way the community rallied around school sports teams.

The pandemic hastened their move, and the couple lucked into finding the home they wanted just as it hit the market: a four-bedroom colonial on about 1.5 acres on the northern end of town. They paid $605,000. 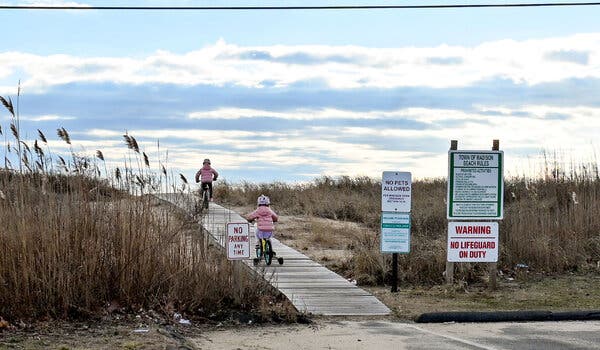 The boardwalk entrance to the beach at the Surf Club.Credit…Jane Beiles for The New York Times

“There are close to 100 homes in the neighborhood, and there are a ton of kids,” Mr. Concannon said. “Once we are able to come out of this Covid, it should be a lot of fun.”

Amy Thomas, 48, and Andrew Longstreth, 45, started looking for a house in Madison last May, but nearly every house they inquired about was already under contract. At the time, they were living in a co-op in Prospect Heights, Brooklyn, with their young daughter, and they let the search slide for a bit, before eventually finding a home in early July.

They bought a four-bedroom Cape on an acre overlooking the Neck River, paying $764,000. Ms. Thomas, a freelance writer, said they chose Madison for the coastal location — on Long Island Sound, about 100 miles east of Midtown Manhattan — the appealing downtown shops and the small-town feel.

“It’s neither too hip, nor too boring,” she said. “It was an emotional decision to leave the city — we loved our co-op and our neighbors and the diversity. That was the one reservation about moving here: It’s a very white town.”

Their new neighbors have been welcoming, dropping off baked goods after the couple moved in and assuring them that, were it not for the pandemic, the neighborhood would be buzzing with barbecues and dinners.

Covering 36 square miles in the easternmost corner of New Haven County, Madison is a quiet suburb of roughly 18,000 people. Its shoreline neighbors are Guilford to the west and Clinton to the east.

The town is perhaps best known for Hammonasset Beach State Park, the state’s largest shoreline park, with two miles of beach, campsites and a nature center. There are also three town beaches, including the one at the Surf Club, a prized 45-acre park where Friday night football games are played on a field by the water.

Unlike some towns with rockier shorelines, Madison “happens to be blessed with long, sandy stretches of beach — nature gave them to us randomly,” Ms. Muir said.

It’s also one of the few towns where the business district is close to the shoreline, making it possible to live close to both town and the beach, said Lisa P. Rollins, the owner of the Rollins Group at Page Taft Christie’s International.

Housing types vary widely, from antique colonials around the historic green to shingled cottages and palatial waterfront houses in the coveted beach neighborhoods east and west of downtown, and newer colonials clustered in cul-de-sacs on the woodsy northern end of town.

Agents said they are seeing many buyers from New York City and Boston. But Madison is also seeing an influx of buyers from Fairfield County, about 50 miles west, as remote work allows them to live in a comparatively affordable area of the state, said Susan Woods, an agent with William Pitt Sotheby’s.

The median sale price for a single-family home in Madison last year was $479,000, a 20 percent increase over 2019, according to data from William Pitt. That price point buys you an older colonial or Cape, somewhat updated, on about an acre, Ms. Woods said.

About 80 properties were listed for sale as of late January. The least expensive, at $324,900, was a 568-square-foot, two-bedroom cottage a short walk from the beach. The most expensive, at $2.725 million, was a historic colonial with five bedrooms, a pool, a carriage house and a separate building lot.

The reduced inventory means “bidding wars are now common,” Ms. Woods said. “We’ve started using a form for an escalation clause, which says, ‘I will go X amount over the highest bid with a cap of Y.’”

With the market moving so quickly, Ms. Rollins said she is finding that “sellers are hesitant to list their homes, even though there’s a preponderance of buyers, until they know where they’re going.”

The forest-green storefront of R.J. Julia Booksellers anchors the downtown; Ms. Woods calls the busy shop, which opened in 1990, “the heart and soul of our town.” In a normal year, the store and its small cafe hold some 250 author events.

The owner, Roxanne J. Coady, said she has always tried to make it a welcoming spot for conversation, a sort of “indoor town green.” Her staff has noticed that, as in the days immediately after 9/11, customers have recently been drawn to the store. “Because while you can’t necessarily all go hang out at a bar,” she said, “you can hang out at the bookstore and be welcomed, whether you’re buying or not buying.”

Across the street, Madison Art Cinemas has long drawn a loyal following to its screenings of independent art and foreign films. (The theater has been closed since March because of the pandemic; the owner did not respond to an inquiry about its reopening.)

The historic green adjacent to downtown has a farmers’ market on Fridays during the growing season. And the area close to the entrance to Hammonasset caters to day trippers, with ice-cream stands and takeout restaurants. One popular stop-off is Lenny & Joe’s Fish Tale, a seafood restaurant with dozens of picnic tables around an outdoor carousel.

Brick sidewalks and decorative street lamps add to the charm of Madison’s commercial district.Credit…Jane Beiles for The New York Times

Daniel Hand High School enrolls about 1,000 students. The four-year graduation rate is 98 percent. Average SAT scores in 2019 were 579 in reading and writing, and 579 in math, compared with state averages of 529 and 516.

Shore Line East trains run regularly from Madison Station to New Haven, where commuters can catch a Metro-North train to Grand Central Terminal. The ride into the city takes just over two hours; a one-way ticket is $24 to $30, depending on the time of day and method of purchase, and a monthly pass is $500.

Driving to Midtown Manhattan on Interstate 95 takes about two hours.

The high school’s namesake, Daniel Hand, was born in Madison in 1801 and left as a teenager to seek his fortune in Georgia. His business ventures there proved successful, but after the Civil War broke out, Mr. Hand, who was pro-Union and antislavery, left his interests in the care of his partner and headed north. In the 1880s, his partner traveled to Connecticut to deliver Mr. Hand’s share of the business earnings: more than $1 million. Mr. Hand used the money to establish a trust fund with the American Missionary Association for the purpose of educating Black people in the South.