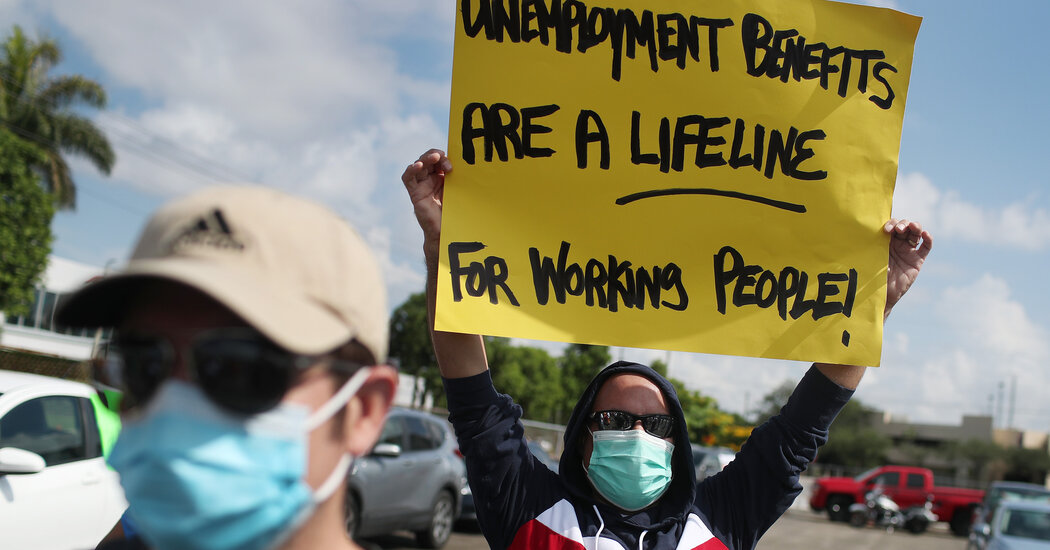 The federal government’s efforts to help unemployed workers get through the coronavirus pandemic have centered on increasing the size and extending the duration of weekly benefit checks.

But there is a critical hole in these plans: Most unemployed workers don’t get anything.

Unemployment insurance was created in the 1930s as a safety net for workers who lose jobs through no fault of their own. But the net no longer catches most. In some states, like North Carolina, less than one in four workers who lose work actually get government benefits.

Overall, the share of unemployed workers who obtained benefits fell from 44 percent in 1980 to about 28 percent in 2019, according to the W.E. Upjohn Institute for Employment Research.

Each state administers its own unemployment insurance program, an arrangement that was billed as an opportunity for states to innovate and learn from one another. Instead, it has devolved into a race to the bottom, with states seeking to minimize the burden on businesses, which hisse for the benefits. To hold down costs, many states have created obstacle courses of forms and tests and documentation requirements that make the process of obtaining jobless benefits a job in its own right.

The same states tend to skimp on the benefit payments, too. The unemployment insurance system was designed to replace 50 percent of lost wages, striking a balance between helping workers and preserving an incentive to look for a new job. But in 13 states, including Florida, Illinois and Arizona, the average worker before the pandemic received benefits that replaced less than 40 percent of lost wages.

Many of the same states have slashed the duration of benefits from the standard 26 weeks. In Florida and North Carolina, the maximum was reduced to just 12 weeks during periods when the state unemployment rate is at a low level.

In every economic downturn since 1958, the federal government has overwritten the shortcomings in state rules by pumping supplemental aid into the system. During the current crisis the government has gone further than ever before.

Last spring, Congress provided federal funding to expand eligibility for benefits, the duration of benefits and the amount of the weekly checks. Congressional Democrats are working to pass a Biden administration plan that includes hundreds of billions of dollars to extend those efforts. That aid is necessary and important. But Congress and the Biden administration also need to recognize that money is not enough. The government also needs to take steps to get the money to the people who need it.

Even the best-prepared states were overwhelmed by the wave of layoffs last year, and the chaos was compounded in states that barely manage to help jobless workers in olağan times. In Florida, by various measures the state that does the least to help the jobless, one survey found only 8 percent of workers who applied for unemployment benefits in the early weeks of the crisis received a benefit check by the end of May.

Almost a year into the pandemic, unemployment remains high. Jerome Powell, the Federal Reserve chairman, said Wednesday that about 10 percent of the work force remains out of work, significantly higher than the government’s official estimate of the unemployment rate. And many states are still struggling to deliver aid. A survey in January found just 24 percent of unemployed workers nationwide were getting benefits. Georgia reports a backlog of 180,000 applications. A California assemblyman said last week that his office logged 3,000 calls from people unable to get benefits. A Texas congressman said one constituent spent six hours on hold with the state unemployment office before her call was disconnected. She never did get to talk to anyone.

The Biden administration most likely can improve on the performance of the Trump administration simply by trying. Two days after his inauguration, Mr. Biden announced the creation of “benefit delivery teams” to work with states on improving access. He also directed the Labor Department to issue guidance that would encourage states to extend benefits to people who leave work, or refuse to return to work, because of the risk of contracting the virus.

Money also can help. Senator Ron Wyden, Democrat of Oregon, introduced legislation on Wednesday that would provide $500 million for the Labor Department to build a set of programs that states can use to process applications and manage benefits. It’s a good idea that would help states like New Jersey, where, in the early weeks of the pandemic, the embarrassed governor said the state was struggling to find programmers who knew how to write code for the state’s 40-year-old systems.

But inducements are not enough. The federal government needs to step in, too.

The shortcomings of the unemployment system are rooted in federalism. Congress created unemployment insurance and Social Security at the same time and as sister programs. Both were funded by a tax calculated against the first $3,000 of income. Since then, Congress has increased the taxable wage base for Social Security to $142,800 to preserve the program’s financial health. But it allows states to assess unemployment insurance taxes, which are paid by employers, on a wage base of as little as $7,000 per worker. Conservative states in particular have eagerly accepted that invitation, gratifying business interests by maintaining low levels of taxation.

The necessary solution is for Congress to establish stronger national standards. When the pandemic recedes, and the federal government stops dispensing emergency aid, it can induce states to raise more money for unemployment benefits, and require states to spend more money on benefits for more workers.

Pre-crisis eligibility requirements in many states were absurdly restrictive. Self-employed workers and independent contractors were generally ineligible. Part-time workers didn’t qualify. People who left a full-time job were required to look for another full-time job. Looking for part-time work was enough to lose benefits, too. It was not enough to leave a job involuntarily. The employer had to do the pushing. People who left work to deva for an ailing family member, for example, didn’t get benefits.

Last year, Congress temporarily expanded eligibility for unemployment benefits, at federal expense, to include many people in these circumstances. The Democrats’ fiscal plan would extend that expansion through the summer.

It ought to be treated as more than an emergency measure. The rules need a permanent rewrite to adapt unemployment insurance to the realities of working life in America.