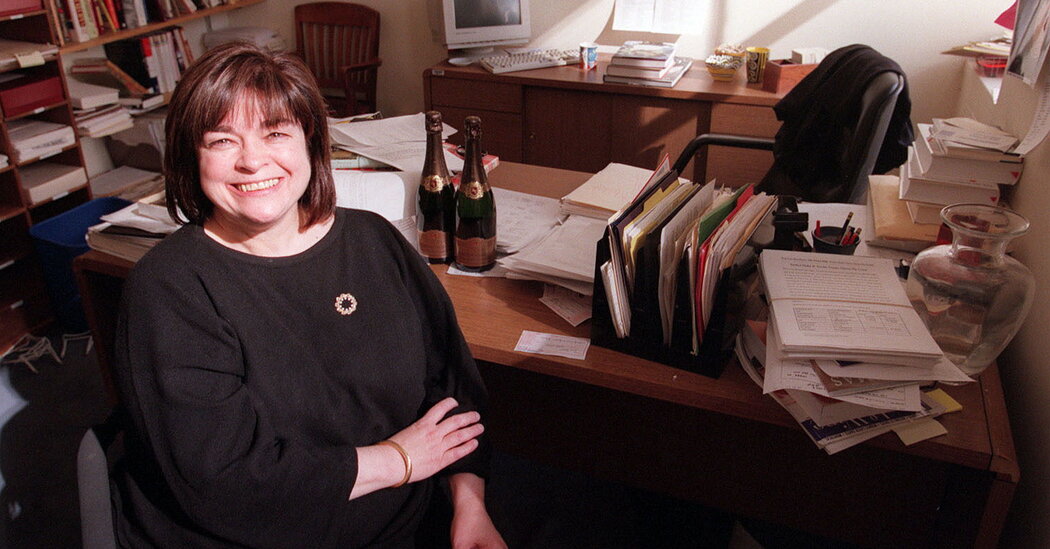 Maria Guarnaschelli, a formidable book editor who helped transform American cooking from a domestic chore to a cultural touchstone, and who presided a major revision of the popular book “Joy of Cooking,” died on Saturday in Manhasset, N.Y. She was 79.

Her death, at Northwell Health Stern Family Center for Rehabilitation, was caused by complications of heart disease, said her daughter, the chef Alex Guarnaschelli.

In a career that began in the mid-1970s, Maria Guarnaschelli brought intellectual heft and curiosity to the cookbooks she acquired and edited while pushing American cooks and chefs, who had been conditioned to revere “continental” cuisines like French and Italian, to think beyond Europe.

The first cookbook she shepherded became the first comprehensive Indian cookbook for American kitchens: Classic Indian Cooking, by the Brooklyn cooking teacher Julie Sahni. Published in 1980, it is still in print.And at a time when the Mexican culinary tradition was little appreciated in the United States, she encouraged the chef Rick Bayless to reproduce the recipes he had studied in Mexico in painstaking detail.

Maricel Presilla, who worked with Ms. Guarnaschelli for nearly 20 years on “Gran Cocina Latina,” her magisterial 900-page work on the food of Latin America, said “any other editor would have cut my book in half.” It won top awards from both the James Beard Foundation and the International Association of Culinary Professionals when it was published in 2013.

“She wanted every recipe and every sentence to be a road map for the reader,” Ms. Presilla said.

From the beginning of her career, Ms. Guarnaschelli’s relentless approach earned her a reputation for harshness, but the works she championed earned dozens of awards, among them “The Zuni Cafe Cookbook,” by Judy Rodgers (2002), “The Splendid Table,” by Lynne Rossetto Kasper (1992), “The Cake Bible,” by Rose Levy Beranbaum (1988) and “My Bread” (2009), by Jim Lahey, whose no-knead bread technique remains one of the most popular recipes ever published by The New York Times.

Alex Guarnaschelli said that her mother had spent years testing, retesting and rewriting the recipes in the books she edited, until the family tired of creations like sponge cake or balsamic vinegar.

“She needed to understand the mechanics of cooking in order to get it onto the page,” she said in a phone interview. “I think I became a chef so I could take her work in the other direction.”

Like her longtime rival, the Knopf editor Judith Jones, who published Julia Child and Marcella Hazan, Maria Guarnaschelli valued accuracy and rigor above “quick” and “easy.” Her books included recipes for dishes that required days to make and included ingredients, techniques and equipment that were far from commonplace in American kitchens at the time.

“Maria was a major contributor to the sea change in how cookbooks were done,” said Nach Waxman, founder of the Manhattan cookbook store Kitchen Arts and Letters and a colleague of Ms. Guarnaschelli’s at her first publishing job, as an editorial assistant at Harper & Row Publishers. She went on to hold senior positions at William Morrow, Scribner and W.W. Norton; she retired in 2017.

By refusing to simplify their work to reach a larger audience of American home cooks, Mr. Waxman said, “she squeezed great work out of her authors.”

Maria DiBenedetto was born in Brookline, Mass., on April 18, 1941. Her father, George DiBenedetto, was a refrigeration salesman, and her mother, Horatia Alice (Peabody) DiBenedetto, was a homemaker. She graduated from Emmanuel College in Boston and earned a master’s degree in Russian literature from Yale University, where she met her future husband, John Guarnaschelli, a history professor. He died in 2018.

In addition to her daughter, she is survived by two brothers, George and Stephen DiBennedetto; a sister, Lucia DiBenedetto; and a granddaughter.

Ms. Guarnaschelli’s “All New All Purpose Joy of Cooking,” published in 1997, shrugged off the cozy Midwestern charm of the original work, but it was met with criticism and didn’t sell as well as the original.

For five tumultuous years in the 1990s, Ms. Guarnaschelli presided over a project that became a public debacle: a complete revamping of “Joy of Cooking,” the best-selling cookbook in U.S. history. Self-published in 1931 by a St. Louis housewife, Irma Rombauer, and her daughter, Marion Rombauer Becker, the book sold thousands of copies every year but had not been substantially updated since 1975.

Backed by the publishing giant Simon & Schuster, where she was senior editor and vice president of the Scribner imprint, Ms. Guarnaschelli persuaded dozens of eminent cooks to rework the book into a çağdaş culinary bible.

Published to great fanfare in 1997, the “All New All Purpose Joy of Cooking” shrugged off the cozy Midwestern charm that infused the original work: Only about 50 recipes of more than 4,000 were unchanged. (The new edition credited Irma Rombauer, who died in 1962, Ms. Becker and her son Ethan as authors.)

The new version was praised as comprehensive and functional, but it was also called “joyless” by one critic and “corporate” by Molly O’Neil in The Times, and failed to reproduce the sales figures of the original. The Becker family soon disavowed the book; in 2006, after Ms. Guarnaschelli had moved on to the publisher W.W. Norton, Scribner published another revision that restored much of the 1975 edition.

Apart from her work on cookbooks, Ms. Guarnaschelli earned a reputation for turning academic authors into popular writers, including David Quammen, Steven Pinker and Deborah Tannen. Ms. Tannen’s book “You Just Don’t Understand,” a seminal study of gender and linguistics, published in 1990; it remained on The Times’s best-seller list for nearly four years.