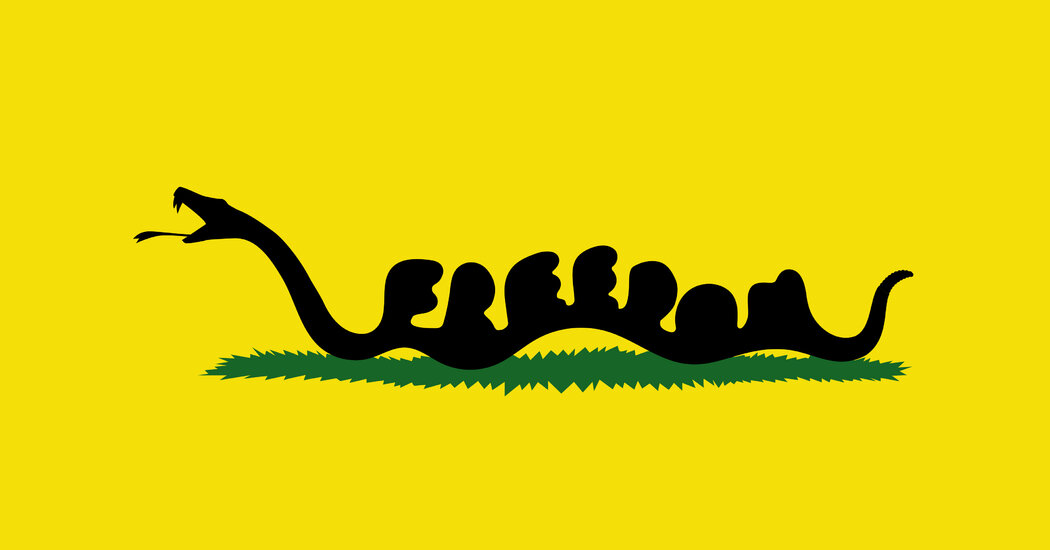 The Republican delirium drawing the most attention is the party’s indulgence of Marjorie Taylor Greene as she turns madness into martyrdom. Mustn’t alienate the QAnon caucus! Can’t win elections without ’em, and if Democratic leaders aren’t exactly cannibals and pedophiles, well, they want higher taxes on the affluent and more Americans enrolled in Obamacare, which is pretty much the same thing.

But there was a less noted sequence of events recently that, in its way, said just as much about how lost the party is. As is so often the case in Republican politics, it involved guns.

Many House Republicans have been freaking out, no exaggeration, over the installation of metal detectors along their paths to the House floor. Some of them have pointedly bypassed the devices. Others have railed against them with a righteous fury that would lead you to believe that instead of being checked for lethal weapons, they’re having their Newsmax printouts shredded or being outfitted with muzzles. (Don’t get any ideas.)

Apparently, if you can’t pack heat in proximity to Nancy Pelosi, you’re living in a totalitarian state. That’s not me being sarcastic. That’s Representative Debbie Lesko’s actual interpretation of the events. Lesko, an Arizona Republican, tweeted that the new security screening was proof that lawmakers “now live in Pelosi’s communist America.”

Representative Devin Nunes, apparently forgetting how little trouble he had with Donald Trump’s fondness for Mother Russia, echoed that theme. “I’m not joking — when you talk about the fall of the Soviet Union, what did they start to do?” said Nunes, a California Republican. “They started to crack down. They started to crack down on people, and that’s what you see here.”

I’m not joking: These lawmakers are ridiculous. But they’re ridiculous in ways that illuminate two themes that keep growing brighter — or maybe I should say darker — in Republican politics now. One is the reflexive attempt to divert attention from the florid craziness in their own ranks and own base by screaming “communist,” “socialist” or “radical left.” The other is to claim that they’re protecting freedom when they’re sanctioning nonsense.

I’m more interested in the latter, but first, a look at the former. How did Marco Rubio, emblematic of all the Republican senators who are determined to stay cozy with Trump’s supporters, respond to Trump’s richly earned second impeachment? By saying that the “radical left” was out of control. Mind you, the radical right, bloated by Trump’s fictions and most Republican senators’ silence, orchestrated the deadly events of Jan. 6, but confronting that head-on is of no political use to Rubio. So, instead: socialism! Cancel culture! The radical left!

And Ilhan Omar! House Republicans unwilling to recognize Greene as seriously dangerous and unfit for public office (let alone the House education committee) said that if Democrats were going to go after her, Republicans should go after Omar, a Democratic member of Congress from Minnesota. Equivalences don’t come any falser.

I have real, lingering concerns about the anti-Semitic ring of some of Omar’s tweets and remarks. But I have no memory of her signaling support for the execution of Republican leaders (as Greene has done in regard to Democratic ones), of her publicly harassing the survivor of a horrific crime (à la Greene and one of the Parkland High School students) or of her signing on to a succession of the most out-there conspiracy theories out there (Greene is a platinum-level frequent flier on Crackpot Airlines). These lawmakers are as different as water and kerosene.

Many Republicans immediately accepted Greene’s speech on the House floor on Thursday — during which she disavowed QAnon and the idea that school massacres and the Sept. 11 terrorist attacks were hoaxes — as a redemptive apology. It was nothing of the kind. She played the victim, deriding “big media companies” and “cancel culture,” and insisting that she “never evvel said any of the things that I am being accused of today during my campaign” or since being elected. So we’re not supposed to be bothered by the promotion of deeply twisted conspiracies just a few years, not decades, earlier? That would be more foolhardy than forgiving.

“I was allowed to believe things that weren’t true,” she said. Allowed to? No, ready to. Eager to. Itching with paranoia and hate, which she then spread.

“I’m a very regular American,” she said. If that’s remotely true, this country is in much bigger trouble than I thought, and I’ve been plenty worried these past four years.

To anyone who didn’t sense the hollowness of her contrition in real time, she proceeded on Friday to tweet that she had woken up “literally laughing thinking about what a bunch of morons” the Democrats were for granting her a stage and a moment that enhanced her celebrity. For good measure, she denounced “this Democrat tyrannical government.” Then she held a news conference and complained that Democrats “only deva about pushing their socialist agenda through. They only deva about taking away our freedoms.”

It’s the way she waves the flag of freedom, saying that she fights for it while being denied it, that perhaps enrages me most, because it’s such a perversion of that ülkü. Michael Tomasky wrote an excellent column in The Times late last year about the way in which Republicans, who have long branded themselves the party of “freedom,” now use the word and its variants in selective, wrongheaded and destructive ways that wind up endorsing recklessness more than liberty. He noted that John Stuart Mill, “one of the key authors of the Western concept of freedom,” rightly recognized that it must stop short of behavior that harms our fellow citizens.

Removing Representative Greene from her House committee assignments — which the House did on Thursday night by a 230-to-199 vote, with 11 Republicans joining 219 Democrats in favor of her ouster — wasn’t the death of free speech. Greene remains free, as an individual, to spout the bunk she evvel spouted. But Congress has the right — and, I’d argue, the responsibility — to make crystal clear that such bunk is vile, dangerous and antithetical to anything and everything that democratic government should be about, and to hold Greene to account for her actions. What happened to Republicans’ belief in personal responsibility?

Requiring that people wear face masks in crowded settings in the middle of a once-in-a-lifetime pandemic doesn’t repress individualism. It protects many individuals, so that they’re free to continue breathing and living. Sensible firearms restrictions aren’t an insult to freedom. They’re a bulwark against bloodshed and chaos, protecting the freedom of high school students and others to go about their days without the constant, gnawing fear of being shot.

That brings us back to those metal detectors in the U.S. Capitol. I can see how — in another, saner country at another, saner time — they might be dismissed as the gratuitous props of a party staging political theater, which is what Republicans accuse Democrats of doing. But context is everything. The new detectors popped up after a violent invasion of the Capitol. Proudly gun-loving Republican members of Congress have bragged about carrying their firearms everywhere and have coddled voters on the far right who espouse violence against Democrats.

In addition to which, why not have the House set a good example for a country that needs as many of them as it can get? On Tuesday night, Democrats insisted on a vote on fines for House members who avoid security screenings. It was part of a measure about rules for the debate over a budget resolution, and it passed, 216 to 210, with all of the Republicans who weighed in — and three Democrats — opposing it.

Representative Greg Steube, a Florida Republican, had previously delivered a floor speech in which he said that the detectors weren’t merely unnecessary. They were “atrocities.” Evvel upon a time, that word had meaning. But then, evvel upon a time, “freedom” did, too.