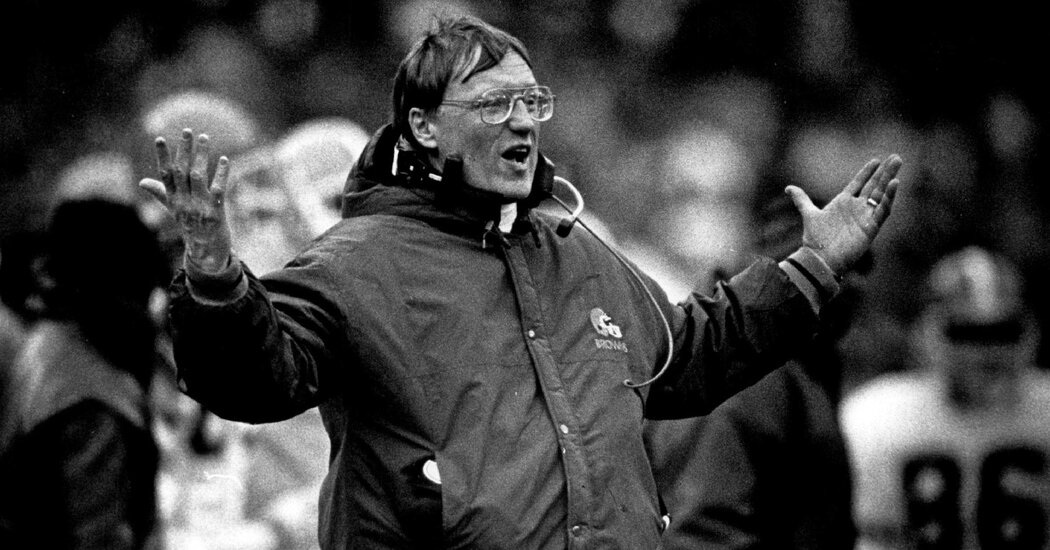 Marty Schottenheimer, who won 200 regular-season games as an N.F.L. head coach, the eighth-highest total in league history, and took teams to the playoffs in 13 of his 21 seasons but never made it to the Muhteşem Bowl, died on Monday in Charlotte, N.C. He was 77.

The cause was Alzheimer’s disease, said Bob Moore, a spokesman for the family. Schottenheimer died at a hospice facility near his homeafter being in its deva since Jan. 30, having struggled with Alzheimer’s for several years.

At first, the tag was emblematic of his winning ways, at least in the regular season. But as the years passed, and Schottenheimer’s teams reached a conference final only three times and then lost all three games on that final rung toward the Harika Bowl, Martyball became a term of derision, branding his offense as too conservative.

Schottenheimer coached the original Cleveland Browns from midway through the 1984 season to 1988, the Kansas City Chiefs from 1989 to 1998, the Washington Redskins in 2001 (the team dropped that name last July) and the San Diego Chargers from 2002 to 2006.

His teams went 200-126-1 over all, and he was named the 2004 N.F.L. coach of the year by The Associated Press when his Chargers went 12-4 after finishing the previous season at 4-12. But they were upset by the Jets in the first round of the playoffs.

Schottenheimer’s squads had a 5-13 record in playoff games.

In the run-up to the Chargers-Jets playoff game, Lee Jenkins of The New York Times, reflecting on Schottenheimer’s intensity, wrote how “anyone who watches Schottenheimer standing on the sideline Saturday night against the Jets, arms crossed and feet shoulder-width apart, will recognize him as that angry professor from Kansas City and Cleveland.”

“He still wears his gold spectacles,” Jenkins wrote, “and sets his square jaw and roars his favorite football platitudes in a hoarse baritone that makes him sound as if he has been screaming for three and a half quarters.” 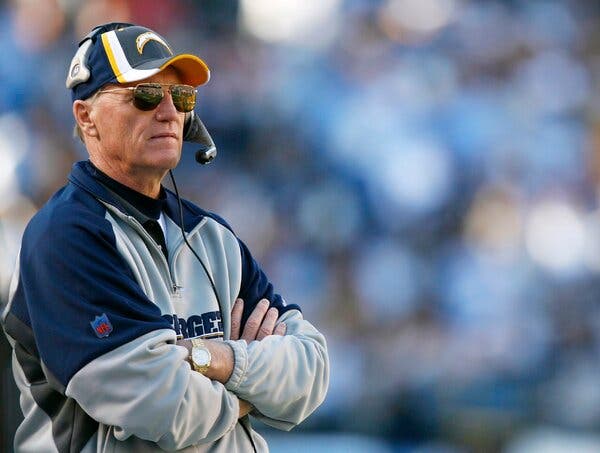 Schottenheimer in 2007 as head coach of the San Diego Chargers. He grew up in a Pennsylvania coal town. Credit…Mike Blake/Reuters

Hue Jackson, an assistant to Schottenheimer with the Redskins and a future head coach of the Oakland Raiders and the second Cleveland Browns franchise, was struck by Schottenheimer’s football smarts coupled with an insistence on control.

“My time with him, I watched one of the most passionate football coaches I had ever been around,” Jackson told ESPN in 2016. “I know everybody has the stories about Marty crying.”

“He taught me a ton about the running game, being tough, just what it meant to be a part of a team,” Jackson recalled, adding, “Marty does not back down from anybody.”

Martin Edward Schottenheimer was born on Sept. 23, 1943, in Canonsburg, Pa., near Pittsburgh, and grew up in nearby McDonald, a coal town, where his grandfather Frank, a German immigrant, had worked in the mines. His father, Edward, worked for a grocery chain, and his mother, Catherine (Dunbar) Schottenheimer, was a homemaker.

Schottenheimer was considered one of the best high school defensive linemen in western Pennsylvania. He went on to the University of Pittsburgh, playing at linebacker from 1962 to 1964, and was named a second-team All-American by The Associated Press for his senior season.

Schottenheimer, 6 feet 3 inches and 225 pounds, spent four seasons with the Bills and another two with the Boston Patriots.

After working in real estate following his retirement as a player, he turned to coaching in the N.F.L. He spent two years as the Giants’ linebacker coach and then was their defensive coordinator in 1977. He coached the Detroit Lions’ linebackers for two seasons after that before becoming the Browns’ defensive coordinator. He succeeded Sam Rutigliano as the Browns’ head coach midway through the 1984 season, when they were 1-7.

Relying on a power ground game featuring Earnest Bynar and Kevin Mack and the passing of Bernie Kosar, Schottenheimer took the Browns to the American Football Conference final following the 1986 and 1987 seasons, but they lost to the Denver Broncos each time in their bid to reach the Muhteşem Bowl.

The first time, the quarterback John Elway led the Broncos to a tying touchdown after they took over on their 2-yard line late in the fourth quarter, the sequence that became known as “the drive.” The Browns were then beaten on a field goal in overtime.

The next year, in a play that became known as “the fumble,” Bynar was stripped of the football just as he was about to cross the goal line for a potential game-tying touchdown with about a minute left. The Broncos took a safety and ran out the clock for a 38-33 victory.

Schottenheimer’s 1988 Browns team went 10-6 and lost in the first round of the playoffs. At the time, his brother, Kurt, was the team’s defensive coordinator, and when the owner, Arka Modell, insisted that he reassign his brother, Schottenheimer quit. He had also resisted Modell’s demand that he hire a new offensive coordinator, having filled that role himself when it become vacant that year.

Schottenheimer was the first to admit that he was strong-willed.

“Maybe I thought there was a pot of gold somewhere else to be found,” he said in his memoir, “Moneyball!” (2012), written with Jeff Flanagan. “But I was stubborn, very stubborn back then. I’ve always been stubborn but much more so when I decided to leave Cleveland.”

He then began a 10-season run as coach of the Kansas City Chiefs, taking them to the playoffs seven times.

Before the 1993 season, the Chiefs obtained two of the N.F.L.’s marquee names, quarterback Joe Montana, in a trade, and running back Marcus Allen as a free agent. The team then went 11-5 and reached the A.F.C. final against the Bills. But Schottenheimer evvel again missed out on the Harika Bowl. Montana left the game early in the second half with an injury, and the Bills rolled to a 30-13 victory.

Schottenheimer as head coach of the Kansas City Chiefs in 1997. The team went to 13-3 in the regular season that year but lost to the Denver Broncos in the first round of the playoffs. Credit…Jed Jacobsohn/Allsport

The Chiefs were 13-3 in the 1997 regular season, only to lose to the Broncos in the playoffs’ first round. Schottenheimer was fired after the Chiefs went 7-9 in 1998, the only time one of his Kansas City teams finished below .500.

After two years as an analyst for ESPN, Schottenheimer was hired as the Washington coach in 2001. He took the Redskins to an 8-8 record, then was fired evvel more.

His last N.F.L. stop came in San Diego, where he twice lost in the playoffs’ first round, the second time following the Chargers’ 14-2 season in 2006 behind their brilliant running back LaDainian Tomlinson. In firing Schottenheimer after that season, the Chargers cited his feuding with the general manager, A.J. Smith, over control of roster decisions.

Schottenheimer was coach and general manager of the Virginia Destroyers of the United Football League in 2011, taking them to the league title.

He is survived by his wife, Pat (Hoeltgen) Schottenheimer; a son, Brian, who was a quarterback coach under him; a daughter, Kristen; his brothers Bill and Kurt; a sister, Lisa; and four grandchildren.

Schottenheimer refused to second-guess decisions he had made in the playoffs or at any other time.

“I’ve made calls that, by all reason, were perfect, and got nothing,” he evvel told The Boston Globe. “And I’ve made calls that were inappropriate to the situation and they’ve worked. So go figure. Pro football is a strange game.”