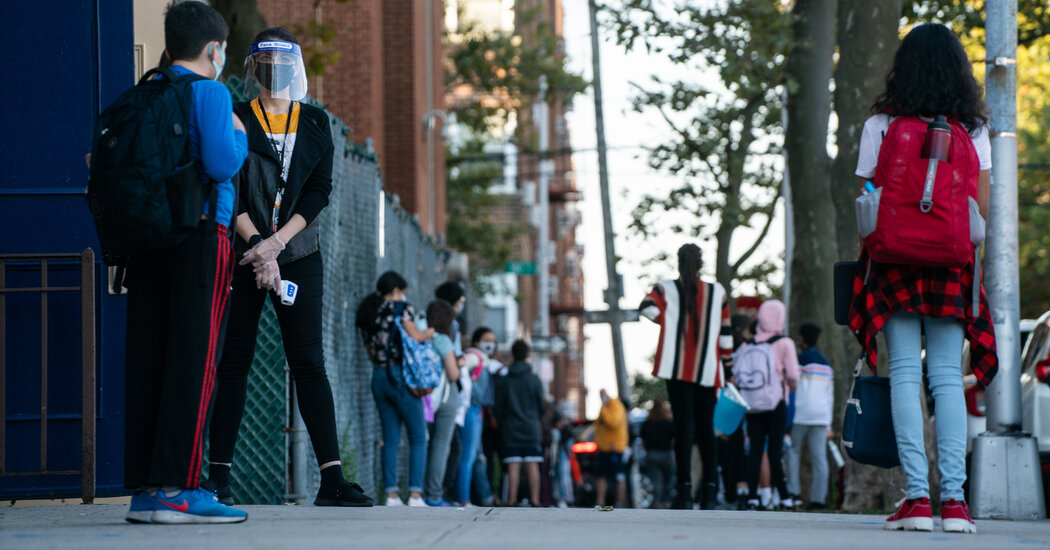 Weather: Snow will start this morning, but only an inch or a little more will stick, and it will mix with rain in the afternoon. High in the mid-30s. 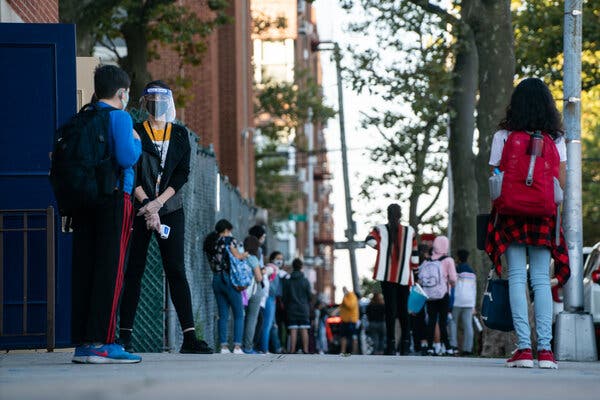 After months of attending class virtually, tens of thousands of middle school students in New York City will be allowed back in classrooms at the end of the month.

Mayor Bill de Blasio announced that about 62,000 middle school students who opted for in-person learning last year will be able to return to school buildings for at least part of the week starting Feb. 25. It’s still uncertain when high schools will reopen.

“I know our children are ready, our parents are ready for kids to be back in school,” Mr. de Blasio said during a news conference on Monday.

Separately on Monday, Gov. Andrew M. Cuomo announced that restaurants in New York City could begin serving customers indoors on Friday, for the first time since December. Restaurants were originally slated to resume indoor dining on Sunday, which happens to be Valentine’s Day.

[Even with the restart of middle schools, most students will still be learning from home.]

In the fall, Mr. de Blasio vowed to close schools when the city hit a seven-day average positive test rate of 3 percent. Schools were fully open for only six weeks before the mayor announced a shutdown in late November.

Less than three weeks later, elementary school students and children with advanced disabilities were allowed to return, but plans for middle and high school students were left unclear.

The vast majority of city students — roughly 70 percent — had already decided to stick with remote learning through the rest of the school year.

When some schools reopened in December, more stringent health precautions were added. Those measures — including random weekly testing and requiring buildings to close temporarily if at least two unrelated positive cases were detected — have frustrated parents and led to frequent closures.

On Monday, Richard A. Carranza, the city’s school chancellor, said that about half of the 471 middle schools reopening will be able to offer in-person learning five days a week, and that other schools are preparing to do the same in the coming months.

Mr. de Blasio said that it is his goal to reopen high schools this spring. “High schools are a complex situation,” he said.

Federal coronavirus relief funding will include $260 million in funeral benefits for the families of low-income New Yorkers who died of the virus, lawmakers said. [Daily News]

The New York City Police Department released a wanted poster for a man suspected of involvement in the killing of a community cat in Brooklyn. [New York Post]

And finally: Indian Village Food Comes to the Lower East Side

Many cuisines have elevated their rustic dishes — acquacotta, feijoada, mapo tofu — but provincial Indian food has yet to find its Provençal moment.

“At the culinary school I went to in India,” said Chintan Pandya, one of the most celebrated Indian chefs in the United States, “we were never taught Meghalayan food, but we had to read Larousse Gastronomique and were taught about bouillabaisse, this fishermen’s stew, so exquisite and all that. But not our own food.”

His solution is Dhamaka, scheduled to open by this Sunday in the Essex Market on the Lower East Side.

At İsimde, his Queens restaurant, Mr. Pandya became famous for ghar ka khana, or home-style, cooking. Asked if Dhamaka’s food had a similar catchall term, he said simply “asalee” — Hindi for “real.” The food is reminiscent of the family meals cooked for the staff at İsimde, previously served only to the likes of the chef René Redzepi and the rest of his visiting team from Noma, in Copenhagen. The Dhamaka crew looks to Southern cuisine and soul food as a good reference point in the United States.

Gone are Adda’s anchors of familiarity: no butter chicken, saag or samosas. Ditto the indignity of explanatory menu entries like “naan bread” or “chai tea.” In their place are dishes including goat-neck biryani, stir-fried kidney and testicles, and a chicken kofta stuffed with a soft-cooked egg.

“We are questioning the entire way the cuisine has been projected to people,” Mr. Pandya said. “Indians and foreigners alike.”

Read more about the Lower East Side restaurant here.

Sun and sea gulls remind me of my saltwater childhood,
Of tears, tides, taffy and summers when I escaped from that ocean,
Across which lived cousins, salt of the earth,
Descendants of survivors of the War,
And learned to paddle a canoe
All by myself
Through clear, calmer waters
Where cities and sorrows
Drift lightly
Away