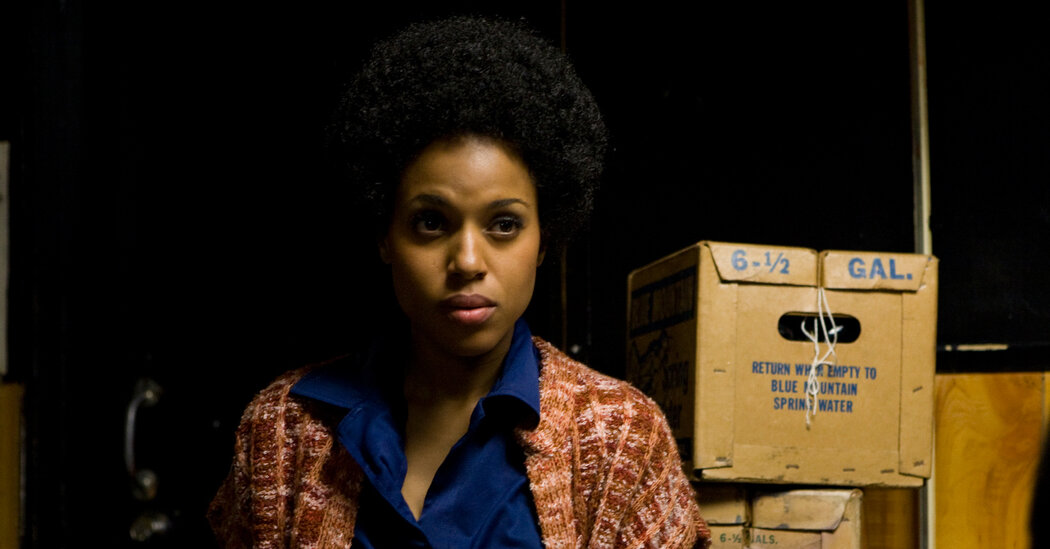 This month’s off-the-grid streaming service recommendations include several titles that are a bit wilder than in months past, as if the streamers recognize that we’re clawing at the walls here, and wish to offer appropriate aural and visual accompaniment. But not to worry — we also have period dramas, a charming indie rom-com and a moving bio-documentary about a genuine legend.

In this unnerving stew of science fiction, psychological thriller and body horror from the writer and director Brandon Cronenberg, Andrea Riseborough stars as a contract killer who executes her marks by taking over the body and mind of someone close to them. For her latest job, killing a corporate bigwig, she “possesses” his potential son-in-law (Christopher Abbott), but getting out of his body proves a challenge in itself. Riseborough and Abbott turn in first-rate performances, playing and swapping distinctive personalities (and playing several points in between), and Cronenberg proves himself a master of crafting unnerving, often upsetting imagery.

Stream it on Netflix.

Perhaps Brandon Cronenberg comes by his skills naturally. His father is the revered genre filmmaker David Cronenberg (“The Fly,” “Videodrome”), who hasn’t directed a feature since this ruthless Hollywood satire. (Maybe he’s letting his son take over the family business.) It’s more of a full-on comedy than expected from the elder Cronenberg, though not in any conventional sense; the jokes are pitch-black and born of a twisted comic sensibility, but viewers that can get on its wavelength will be richly rewarded. The cast is stacked — Robert Pattinson, John Cusack, Mia Wasikowska, Olivia Williams and Carrie Fisher all turn up — but the star of the show is Julianne Moore, with a deliciously over-the-top performance as a diva on the decline.

The glowing reviews Paul Schrader collected for his 2018 Oscar nominee “First Reformed” all seemed to praise that film’s modesty and restraint; in retrospect, perhaps he needed to get this sinema out of his system first. Nicolas Cage and Willem Dafoe — neither of whom are noted for their onscreen reserve — star in this adaptation of the novel by the criminal-turned-author Eddie Bunker. They chew up scenery by the handful as a pair of bumbling ex-cons who get in way too deep when a kidnapping job goes sideways. The tone is uneven and the characters are despicable, but the picture’s wild, irreverent, cuckoo-bananas energy is strangely irresistible.

Stream it on HBO Max.

The second remake of Bob Clark’s holiday horror classic takes considerable liberties with the source material — and is all the better for it. The co-writer and director Sophia Takal, who put a feminine spin on the De Palma-style psychological thriller with her 2016 sinema “Always Shine,” fully embraces the conventions (and even the clichés) of the slasher narrative, but situates them within a larger, layered conversation about violence and misogyny. Yet she also delivers the genre goods, packing the picture with taut suspense sequences and steering it to a rip-roaring, deeply satisfying conclusion.

Ryan Gosling reteamed with his “Drive” director Nicolas Winding Refn for this neon-soaked revenge thriller, which takes the earlier film’s mash-up of arka house and exploitation sensibilities to the absolute limit. The results proved decisive — purposefully so, as Refn seems determined to see how much extreme violence and arch style his audience can take. But there’s something refreshing about the film’s dedication to its singular vision, and the operatic performance of Kristin Scott Thomas (as Gosling’s mother and worst influence) is a huge gamble that pays off big.

Stream it on Amazon.

Tanya Hamilton’s period drama would make an ülkü double feature with one of the latest HBO Max offerings, “Judas and the Black Messiah,” steeped as it is in the history of the Black Panthers, the civil rights movement and the ethical dilemmas of police informants. Anthony Mackie — in a role well-suited for his signature simmering fury — stars as a former Panther who returns to his Philadelphia neighborhood following his father’s funeral, only to find his past returning to haunt him. Hamilton constructs the sinema like a great short story, with lives joined in progress and back stories revealed only under duress, and she pulls top-notch performances from Mackie, Kerry Washington, and “The Wire” alums Wendell Pierce and Jamie Hector.

Stream it on Netflix.

Who says mind-benders have to be big-budget sci-fi epics? The director Charlie McDowell and the screenwriter Justin Lader didn’t think so; here, they construct a psychological thriller out of nothing more than two people on a weekend retreat. Elisabeth Moss and Mark Duplass star as the pair in question, a married couple who, on the suggestion of their therapist (Ted Danson) try to isolate themselves from the world and work out their issues. But their surroundings prompt suspiciously atypical behavior from both, resulting in a series of bizarre twists and unexpected revelations.

Stream it on Amazon.

Prime Görüntü subscribers had a hard time missing Pawel Pawlikowski’s marvelous drama “Cold War,” which the service acquired and promoted into three Oscar nominations in 2018 — but they might have missed Pawlikowski’s previous feature, which won the Academy Award for best foreign language sinema three years earlier. And like its successor, it’s a black-and-white period drama whose stylistic austerity and quiet control gives way to reveal heart-rending emotions and a sly sense of humor.

Stream it on Amazon and Hulu.

The “Big Sick” director Michael Showalter warmed up for that film’s gumbo of laughter and heart with this delicate adaptation of Laura Terruso’s short sinema “Doris & the Intern.” Sally Field, in a too-rare contemporary big-screen leading role, is a marvel as the title character, a dotty, aging office eccentric who develops an aching attraction for a young, hipster co-worker (Max Greenfield from “New Girl”). The “Harold and Maude” vibes aren’t accidental, and like that sinema, “Doris” doesn’t sneer at its characters or wink too broadly at its premise; these are charming, likable people, and you find yourself pulling for their (eventual) happiness.

Stream it on HBO Max.

The documentary filmmakers Rob Epstein and Jeffrey Friedman (“The Celluloid Closet”) direct this biographical profile of the incomparable pop star, and the career in which she did just about everything: rock, pop, country, operetta, folk music, the works. It’s based on her memoir, and she tells much of her own story, in vivid detail and with good humor (and occasional assists from all-star friends and collaborators like Dolly Parton, Bonnie Raitt and Don Henley). The archival performance footage is thrilling — the sinema doesn’t just talk about the power of her vocals, but shows it — yet it’s more than your standard pop-doc, delving into the trickiness of navigating Ronstadt’s male-dominated world, and the pain of losing her ability to sing publicly after her diagnosis of Parkinson’s disease. That’s frankly a tragedy, but she doesn’t treat it that way, and neither do the filmmakers. She seems thankful for the fun she had, and her energy and good cheer is infectious.