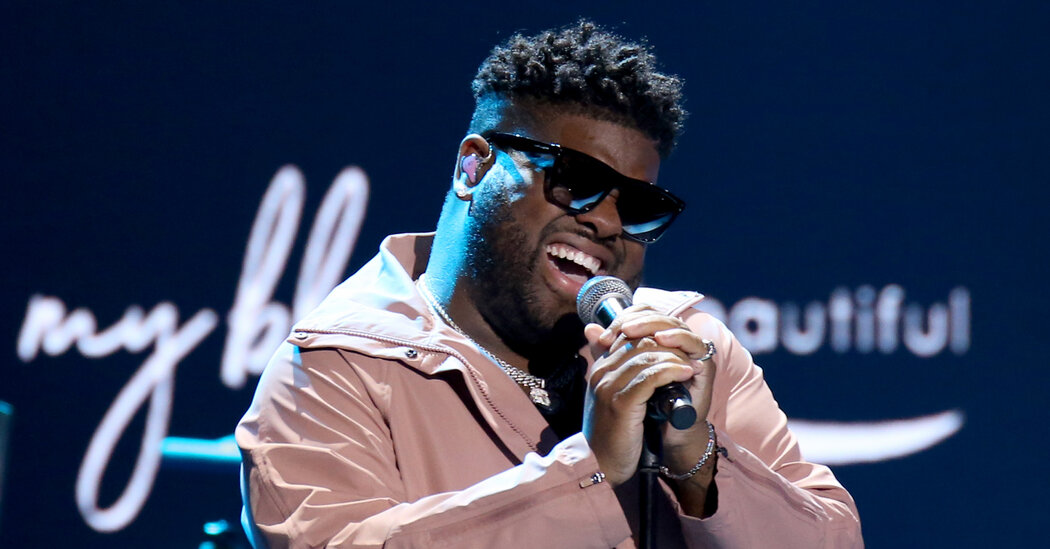 Pink Sweats — the singer and songwriter David Bowden — just keeps getting nicer. He has already racked up hundreds of millions of streams with singles and EPs since 2018; now, he has released his official debut album, “Pink Planet.” He’s connecting to an audience that craves comfort and reassurance rather than tension and strife.

From the beginning of his solo career, with the single “Honesty” in 2018, Pink Sweats revealed a voice filled with longing: a tenor climbing directly into falsetto, steeped in soul music and tremulous with sincerity, in the lineage of Michael Jackson, Usher and, lately, Justin Bieber.

He took his time before stepping forward on his own. Bowden, now 28, played music in church — he took his father’s place as a drummer — and went on to work as a songwriter, a producer and a studio musician (at Philadelphia’s renowned Sigma Studios). There’s deep professionalism behind his affability.

In the songs on his three Pink Sweats EPs — the bare-bones, guitar-and-vocals “Volume 1” in 2018, the blues-tinged “Volume 2” in 2019 and the R&B productions on “The Prelude” in 2020 — Pink Sweats most often presented himself as a fondly importunate lover. But while he was finding his style, he also suggested he was familiar with the temptations of cocaine and alcohol, and that among his companions (in “Drama” from 2018) were tough guys, “real hitters” who “might shoot.”

On “The Prelude” — six songs that also appear on “Pink Planet” — Pink Sweats worked with hitmaking collaborators like the producer John Hill, and he dabbled in the Weeknd’s kind of blingy paranoia in “Icy” and “Not Alright.” But that persona suited him far less than songs like “17,” which hopes to “love you as strong when we’re 92/The same as 17.” (In 2020, he released a remix featuring members of the K-pop group Seventeen.)

For nearly all of “Pink Planet,” Pink Sweats is determinedly wholesome, benevolent and sweetly humble. But he makes it clear that his mission is to create music that’s a refuge from bleak realities. The album’s opener, “Pink City,” states — over gospelly organ and choirlike vocal harmonies — “It’s hard in the city, the city where I’m from” and resolves, “You can build you a city and call it home.” Halfway through the album, in the spoken-word “Interlude,” he explains over somber piano chords that listening to all kinds of music on the radio was “an escape, because the world I was living in wasn’t always so beautiful.”

The songs call for love, intimacy, devotion and forgiveness, for romance that transcends all the small stuff; it has unironic titles like “Heaven,” “Paradise,” and “So Sweet.” In “Beautiful Life,” over puffy synthesizer tones, he coos, “I want to keep you here for the rest of my life”; in “Magic,” he vows, “I’d travel miles just to see you smile, my love,” with a lead guitar doubling his voice.

The album reaches back to vintage soul with 21st-century tools. It’s an affirmation, in its chord progressions and arrangements, of more than half a century of pop, particularly Black pop: of doo-wop, soul and old and new R&B. There are echoes of Earth, Wind & Fire, Sly and the Family Stone, Bill Withers, George Benson, the Jacksons and Prince, along with hints of U2 and Ed Sheeran. Dovetailing past and present, the rhythm track of “At My Worst” starts with 1950s-style finger snaps and swaps them for trap-era drum-machine ticks, as Pink Sweats pleads, “Know I’m not perfect, but I hope you see my worth.” (The album includes two versions: the original and a duet remix with Kehlani.)

As an album, “Pink Planet” extols fidelity and continuity, both to a partner and to a long musical heritage. In a precarious moment, it’s cozy, and not from obliviousness but from determination. Its edge is that it refuses to brandish one.