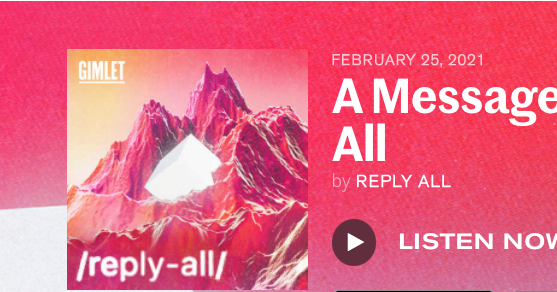 The popular Gimlet Media podcast “Reply All” has been paused and its series delving into racism at a magazine has been shelved after former Gimlet employees complained that one of its hosts and a reporter had themselves contributed to a toxic workplace culture.

On Thursday, in a two-minute “Reply All” episode titled “A Message from the Staff of Reply All,” the co-host Alex Goldman told listeners that the senior reporter Sruthi Pinnamaneni and the co-host P.J. Vogt had decided to leave the podcast after they were accused by former colleagues of working against employee unionizing and efforts to increase diversity.

“These accounts prompted a reckoning on our team about the work culture at ‘Reply All’ and they left us asking whether we could continue airing the story without interrogating ourselves and what has unfolded at Gimlet,” Mr. Goldman said in the statement Thursday.

“We now understand that we should never have published the series as reported, and the fact that we did was a systemic editorial failure.”

The complaints were made on Twitter last week by former Gimlet employees, who saw Mr. Vogt and Ms. Pinnamaneni’s involvement in reporting the “Test Kitchen” series, which focused on issues of racism and discrimination at the food magazine Bon Appétit, as hypocritical. Mr. Vogt and Ms. Pinnamaneni both released public apologies after the accusations.

Mr. Goldman said the remaining two episodes of “Test Kitchen,” which was intended to be a four-part series, would not be released. He apologized to listeners for “our many failings.”

The two episodes of “Test Kitchen” which had already been published would remain online, Mr. Goldman said, with an added disclaimer. “Reply All” would be put on pause as the staff of the show figured out what went wrong.

In a series of tweets on Thursday, Mr. Goldman expanded on his announcement.

“This isn’t the end of reply all,” he wrote. “We’re just figuring out what’s next. Lastly, reply all is not and never has been just Alex and PJ. There is an insanely talented group of people who make this show.”