Ricky Powell, the downtown New York Zelig who with his point-and-shoot camera documented the early years of hip-hop’s ascendance as well as a host of other subcultural scenes and the celebrities and fringe characters who populated the city, was found dead on Monday in his West Village apartment. He was 59.

The death was confirmed by his manager and archivist, Tono Radvany, who said a cause had not yet been determined. Mr. Powell learned he had chronic obstructive pulmonary disease last year and had ongoing trouble with his heart.

Mr. Powell — often referred to, lovingly, as “the Lazy Hustler” — oozed vintage New York City charm and pluck. An inveterate walker, he pounded the pavement with his camera and snapped photos of whatever caught his fancy: superstars, well-dressed passers-by, animals.

Crucially, he was proximate to the emergence of the Beastie Boys, which catapulted him into an unanticipated career as tour photographer and key entourage member, giving him a front-row seat to the worldwide explosion of hip-hop beginning in the mid-1980s.

“Although Ron Galella was his hero — he was the original paparazzi — I used to tell Ricky that you also have the flavor of Weegee,” the once-ubiquitous New York street photographer, said Fab 5 Freddy, the early hip-hop impresario and a longtime friend and photo subject of Powell’s. “He was always in the inner circle, one of the only — if not the only person — taking photos.” 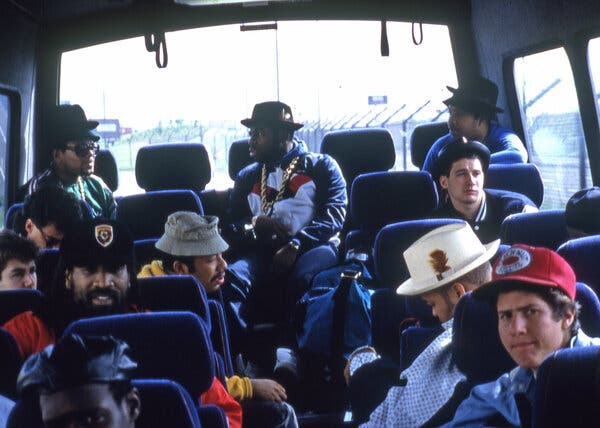 The Beastie Boys and Run-DMC on tour in Europe in 1987, as captured by Mr. Powell. He bought himself a plane ticket to join the Beastie Boys on the road and never looked back.Credit…Ricky Powell

Mr. Powell’s photographs were intimate and casual, a precursor to the offhand hyper-documentation of the social media era. They often felt fully inside the moment, living it rather than observing it. His subjects were varied: Andy Warhol and Jean-Michel Basquiat, captured on the street outside a gallery opening; Francis Ford Coppola and his daughter, Sofia, at one of her early fashion shows; Run-DMC posing in front of the Eiffel Tower; a pre-superstar Cindy Crawford in a nightclub bathroom; people sleeping on park benches.

“He wasn’t trained, he didn’t know how to compose a shot, he didn’t know what an aperture was,” said Vikki Tobak, editor of the photo anthology “Contact High: A Visual History of Hip-Hop” (2018) and curator of a traveling exhibition of the same name, both of which included Mr. Powell’s work. “But you could feel his curiosity about the people he photographed, so none of that really mattered. He made people laugh and feel at ease; you see all that in his photos.”

Run-DMC posed for Mr. Powell’s camera in front of the Eiffel Tower.Credit…Ricky Powell

Ricky Powell was born on Nov. 20, 1961, in Brooklyn and grew up mostly in the West Village. He attended LaGuardia Community College in Queens and graduated from Hunter College in Manhattan with a degree in physical education.

His mother, Ruth Powell, was a schoolteacher — he did not know his father — but also, more crucially, a habitué of downtown clubs like Max’s Kansas City, where she would bring Ricky while he was still a child. She is his only immediate survivor.

“I grew up quick, dude. Fast,” Mr. Powell says in “Ricky Powell: The Individualist,” a documentary about his life that was to have its premiere at the Tribeca Film Festival last year but was delayed by the coronavirus pandemic. It is now scheduled for this year’s festival, in June.

Josh Swade, who directed the documentary, said Mr. Powell had a raw social and cultural intelligence, “from being just out in the streets of New York in the ’60s and ’70s, fending for yourself.”

From left, Debi Mazar, Sandra Bernhard and Madonna in an undated photo. “Every door opened for Ricky,” said Ms. Mazar, who met Mr. Powell when they were both teenagers.Credit…Ricky Powell
Mr. Powell photographed  Cindy Crawford in a nightclub bathroom in 1988.Credit…Ricky Powell

The actress Debi Mazar met Mr. Powell when they were both teenagers riding bicycles around downtown Manhattan. They were, she said, “children of the city.” Together, they went to the Paradise Garage, the Mudd Club and other hot spots. “Every door opened for Ricky,” Ms. Mazar said. “When we would walk into a club, we were the cool kids. He had this savoir faire, this electricity.”

Fab 5 Freddy recalled that “New York was a polarized place when we met,” but that Mr. Powell “was comfortable around Black kids in an era when you didn’t just go into other areas.”

He became a fixture at the Fun Gallery, Danceteria, the Roxy and more, moving alongside graffiti writers, rappers, punk-rockers, artists and the other creative eccentrics who populated New York’s vibrant, jagged downtown world. He played on the graffiti artist Futura 2000’s softball team, the East Village Espadrilles.

“It was almost like he was invisible, too,” said Futura, as he is now known. “He was always scoping, looking for a picture he could take.”

After he graduated from college, Mr. Powell sold ices from a street cart for a time, offering to spike the treat with rum for an extra dollar. He would photograph people on the street during his shifts, including stars of the scene like Basquiat. He was already friendly with the Beastie Boys, who had just signed a recording contract with Def Jam, and one day he bought himself a plane ticket to join them on the road — they were opening for Run-DMC on the Raising Hell Tour — and never looked back.

Jean-Michel Basquiat and Andy Warhol on Mercer Street in Manhattan in 1985.Credit…Ricky Powell

Mr. Powell became a crucial part of the Beastie Boys ecosystem — partying hard, sometimes keeping track of the luggage, playing one of the nerdy protagonists in the “(You Gotta) Fight for Your Right (to Party!)” video and much more. He was name-checked on “Car Thief,” a track from the group’s 1989 album, “Paul’s Boutique,” and was well enough known to have his own groupies.

“When he showed up, that’s when the party started,” Mr. Radvany said.

All the while he was taking photos, and they quickly became essential artifacts. Mr. Powell was a documentarian of a demimonde that was often too busy living loudly to stop and reflect. Over the years, his images appeared in Paper, Ego Trip, Mass Appeal, Animal and other magazines. He also released several books, including “Oh Snap! The Rap Photography of Ricky Powell” (1998), “The Rickford Files: Classic New York Photographs” (2000) and “Public Access: Ricky Powell Photographs 1985-2005” (2005).

“I liked being part of the crew, just hanging. The entourage, per se, but also being a photographer taking relevant pictures simultaneously,” Mr. Powell says in the documentary. “I think you have to get a degree in humanistic behaviors before you can master the two together.”

The Beastie Boys in the West Village in 1986. Mr. Powell was their tour photographer and a key member of their entourage for a decade.Credit…Ricky Powell

Futura said: “He had the gift of gab, very much a New Yorker. He epitomized that for me. I know my own kind.”

For several years in the 1990s Mr. Powell had a public access television show, “Rappin’ With the Rickster,” in which he swapped a still camera for a video camera but maintained the loose, unpredictable energy that he both gravitated toward and generated on his own. (A DVD collecting the show’s greatest hits was released in 2010.)

He was by the Beasties’ side for a decade, but he parted ways with them in 1995 as the group was leaving its old rowdy, disruptive and boorish ways behind. “It got mature,” Mr. Powell says in the documentary. “They did what they did, but I still stayed me.”

After he returned to New York, Mr. Powell struggled to find purpose, and for a time he grappled with drug addiction.

He hadn’t always been sure how to leverage his crucial archive of an underdocumented era. “He could have parlayed the connections into a profitable operation,” Mr. Swade said. “But you have to show up for that.”

Eventually he began working with Mr. Radvany, who set out to organize his archives, and collaborating with brands that licensed his old work or commissioned him for new projects channeling his eau-de-New-York energy. He would also narrate live slide-show presentations of his old images, telling the stories behind the photos.

Mr. Powell in 2017. “He was always scoping, looking for a picture he could take,” a friend said.Credit…Lars Niki/Getty Images

“When I started with him he was down and out, and I had to help him build income,” Mr. Radvany said. “He loved social media. He was the lazy hustler — he could sit on his futon and sell prints.”

And he never moved from his small West Village apartment, which teemed with the effluvia of a life immersed in the epicenter of the city: contact sheets, sneakers, basketball jerseys, vintage magazines and records, endless mementos of the development of New York’s contemporary creative culture. He was, even after all these decades, one with the scene he captured.

“You didn’t see him as a photographer,” Fab 5 Freddy said. “He was a cool kid in the mix who would take out the camera, take a few shots, put it away and say, ‘Pass the joint over here.’”