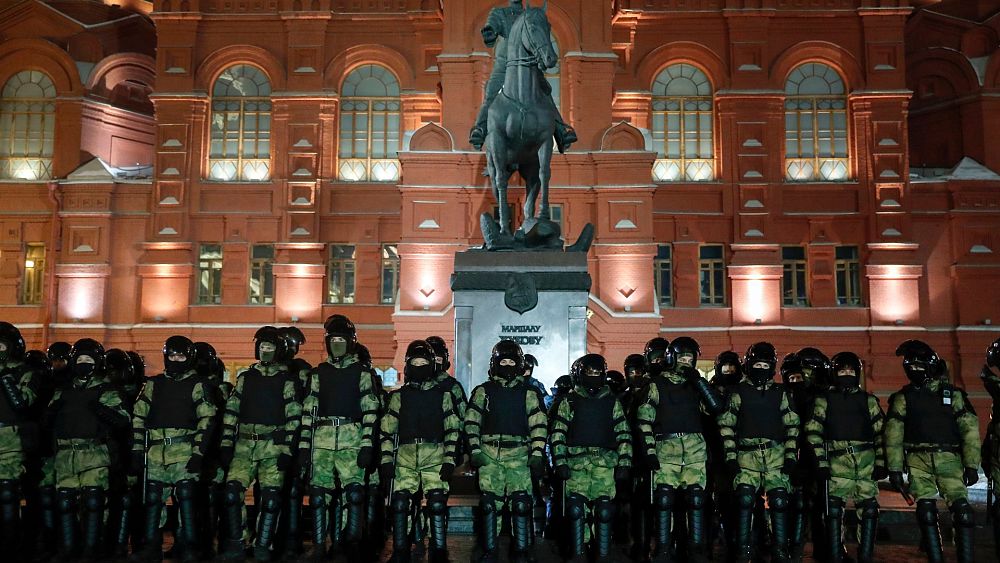 Nearly 1,000 people were detained on Tuesday night in Russia after mass protests broke out in Moscow and Saint Petersburg after a court sentenced Russian opposition leader Alexei Navalny to prison for more than 2 1/2 years.

It ruled he violated the terms of his probation while recuperating in Germany from nerve-agent poisoning.

Navalny, who is the most prominent critic of President Vladimir Putin, had denounced the proceedings as a vain attempt by the Kremlin to scare millions of Russians into submission.

After the verdict that was announced around 8 pm, protesters converged on an area of central Moscow and gathered on St Petersburg’s main avenue Nevsky Prospekt.

Helmeted riot police could be seen grabbing demonstrators and putting them in police vehicles.

As many as 918 people were detained, according to the OVD-Info group that monitors arrests.

The ruling came despite massive protests across Russia over the past two weekends and Western calls to free the 44-year-old anti-corruption campaigner.

The prison sentence stems from a 2014 embezzlement conviction that Navalny has rejected as fabricated and politically motivated.

Navalny was arrested January 17 upon returning from his five-month convalescence in Germany from the attack, which he has blamed on the Kremlin.

Despite tests by several European labs, Russian authorities said they have no proof he was poisoned.

It asked the court to turn his 3.5-year suspended sentence into one that he must serve in prison, although he has spent about a year of it under house arrest that will be counted as time served.

Navalny emphasised that the European Court of Human Rights has ruled that his 2014 conviction was unlawful and Russia paid him compensation in line with the ruling.

Navalny and his lawyers have argued that while he was recovering in Germany from the poisoning, he couldn’t register with Russian authorities in person as required by his probation.

He also insisted that his due process rights were crudely violated during his arrest and described his jailing as a travesty of justice.