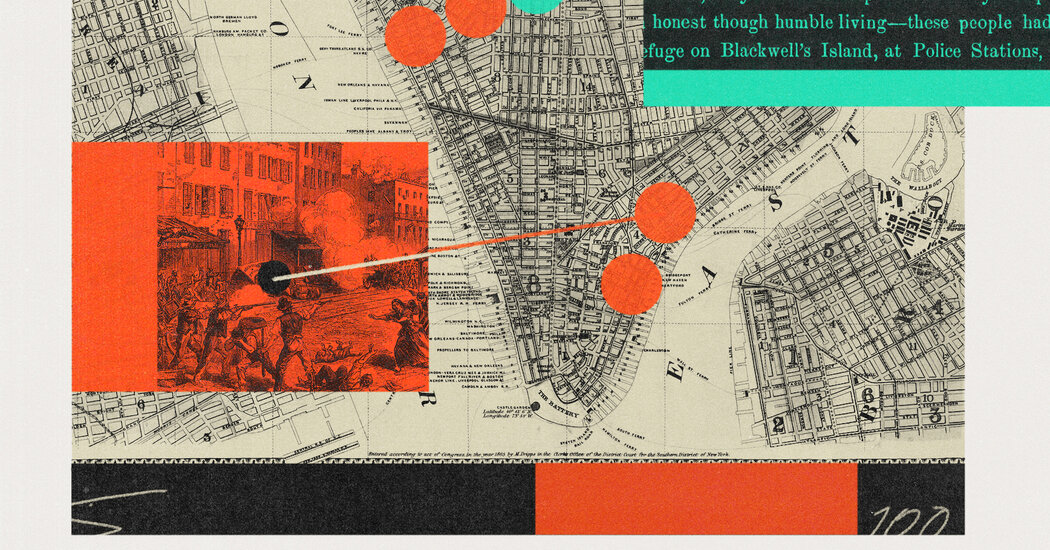 A mob murdered 23-year-old Abraham Franklin at 27th Street and Seventh Avenue in New York City. He had hurried to visit his mother to pray by her side for her protection when the rioters began raging from Downtown to Uptown. Just as he finished his prayers, they crashed through the door, beat him and hung him as his mother looked on. Then they mutilated his body in front of her.

During the riots in July 1863, the mob also came upon Peter Heuston, a 63-year-old widowed war veteran and a member of the Mohawk tribe, whom they took to be Black. They brutally attacked him on Roosevelt and Oak Streets near the East River. He died of his injuries, leaving his 8-year-old daughter an orphan.

Another victim, William Jones, was so disfigured, whether from the mob’s mutilation or the decay his body endured waiting for observers to gain courage to investigate his identity, that he could only be identified by the loaf of bread under his arm. He had gone out to fetch the staple for his wife and never returned.

One woman testified that the mob broke through the doors of her son’s house on East 28th Street in Manhattan, where she was visiting, using pickaxes to break through. The thugs threw a baby out the window to its death. They chopped through the water pipes so the people hiding in the basement of the building would be drowned. They struck her son over the head with a crowbar and he died in the hospital two days later.

Some 400 white people attacked the Black orphanage on Fifth Avenue near 43rd Street. They cut the trees with axes, uprooted the shrubs in what had been a carefully tended garden, carted away the fence and burned the building to the ground.

Many people today, if they have even heard of the Draft Riots, probably know it as a violent citizens’ revolt against President Abraham Lincoln’s 1863 mandatory conscription of soldiers. In Martin Scorsese’s “Gangs of New York,” inspired by the nonfiction book by Herbert Asbury, what happened over those days comes across as a somewhat entertaining if gory battle between rival white gangs.

The truth is that over the course of some four days, mobs of white New Yorkers roamed the streets of the city from City Hall to Gramercy Park to past 40th Street, setting fire to buildings and killing people, specifically targeting Black people for the most horrific violence. Historians are still assessing the overall death toll, with estimates ranging from more than 100 to more than a thousand. One of the most prestigious Black newspapers of the time estimated the deaths of people of color to be as high as 175. Other Black people were driven from their homes and all of their property destroyed. In the aftermath, some 5,000 Black New Yorkers were discovered hiding on Blackwell’s Island, in police stations, in the swamps of New Jersey and in barns on Long Island, desperately seeking safety from the murderous white crowds.

The gruesome events should be remembered. They are as much a part of the city’s history as 9/11, the Triangle Shirtwaist Factory fire or immigration through Ellis Island. And there is a related story to tell. One reason we know about the brutality of those events is a booklet, “Report of the Merchants’ Committee for the Relief of Colored People Suffering from the Riots in the City of New York,”published in 1863, from which I’ve drawn many of the descriptions in this piece. Importantly, the clerks of the merchant’s committee recorded the testimony of many of the people who had lost loved ones to the murderous gangs, creating a clear record of many of the atrocities committed.

Immediately after the riots, the white merchants of New York combined forces to raise money to deva for the injured, repair the damaged property and support the kanunî and employment needs of the terrorized Black people. Of course nothing could make up for the lives lost and the pain and suffering inflicted on those who were attacked. But the shopkeepers quickly raised over $40,000, equivalent to more than $825,000 today. Their fund-raising effort was notable because it focused on preserving and honoring the dignity of the people the merchant committee’s report described as the “sufferers.”

“We have not come together to devise means for their relief because they are colored people,” wrote Jonathan Sturges, the treasurer of the group, “but because they are, as a class, persecuted and in distress at the present moment.”

The merchants went about their work methodically. They vowed to secure help from the county. Lawyers volunteered their expertise. When requested, ministers visited the homes of survivors. They urged businesses that were afraid to rehire their Black employees for fear of the mob’s vengeance to be courageous, and promised to guard the businesses that did rehire.

J.D. McKenzie, the chairman, noted that the murderers and pillagers “sought to destroy a race.” But the shopkeepers made a point of not wasting their time focusing on who perpetrated each of the evil deeds. The report made clear that the murderers were clearly “bad men.” The group moved on to what they could do to rectify the inhumanity.

On Saturday, July 25, 1863, the third day that funds were dispersed, applicants packed Fourth Street near Broadway. The donors prided themselves on limiting stress for the recipients. “There are no harsh or unkind words uttered by the clerks — no impertinent quizzing in regard to irrelevant matters — no partisan or sectarian view advanced. The business is transacted in a straightforward, practical manner, without chilling the charity into an offense by creating the impression that the recipient is humiliated by accepting the gift,” the New York Daily Tribune reported. The donors encouraged people to return if they needed more help.

In the first month, the group assisted 6,392 people. Since their children were beneficiaries as well, the total number helped added up to 12,782 — from laborers to music teachers, physicians to cooks, ministers, artists, and farmers.

Black ministers and laymen wrote a note to the merchants about what it all meant: “You did not hesitate to come forward to our relief amid the threatened destruction of your own lives and property. You obeyed the noblest dictates of the human heart, and by your generous moral courage you rolled back the tide of violence that had well nigh swept us away.”

This episode from the 19th century is haunting even now, first, because of its brutality. The violence occurred on streets where people now dine and shop, oblivious to what happened. Men were lynched while simply walking home from their jobs. But the manner in which the shopkeepers of New York responded is also important, and it may be instructive to how all people confront and respond to racism today.

It’s horrific what happened on Washington and Leroy Streets, or 34th Street at the East River, East 28th Street, Fulton Ferry, 30th Street and Second Avenue and Carmine Street in 1863. But horrific events fueled by racism are not just in our past. Think of what happened to George Floyd in Minneapolis and David McAtee in Louisville and Ahmaud Arbery in South Georgia, and what happens in the cells of people still waiting to be freed under the Supreme Court’s ruling against juvenile life sentences. The story of the merchants’ response to the so-called Draft Riots is a reminder that we can all do more if we don’t want the lives of more Black people to be marred by cruelty. That begins with having a cleareyed view of our own history. Understanding the past in a way that’s neither sugarcoated nor whitewashed will keep us moving forward.

Elizabeth Mitchell is a journalist and the author of four nonfiction books, including “Lincoln’s Lie: A True Civil War Caper Through Fake News, Wall Street and the White House.”