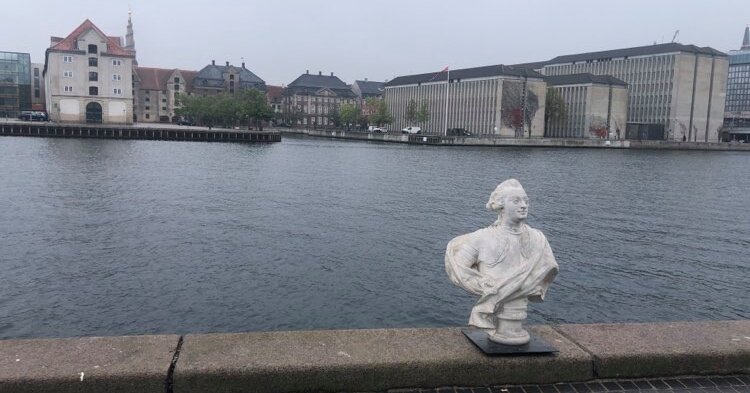 For a while it seemed no one had noticed that something rather prominent was missing from the Royal Danish Academy of Fine Arts, the prestigious institution housed in a palace on the edge of one of Copenhagen’s canals.

It was a bust of Frederik V, the 18th-century king of Denmark-Norway and duke of Schleswig-Holstein. Largely known as an affable if ineffectual leader and an alcoholic, Frederik V was the academy’s founder, and a likeness of him had for years been on display in the institution’s Assembly Hall. Midway through the autumn, it vanished, though it wasn’t until early November that school officials finally realized it was gone.

A few days later, the bust’s fate was revealed. An anonymous group of artists had unscrewed it from its plinth, popped a black garbage bag over its head and ferried it to the edge of the canal, before tipping it in. A görüntü was released that showed the bust disappearing into the inky waters of Copenhagen Harbor. 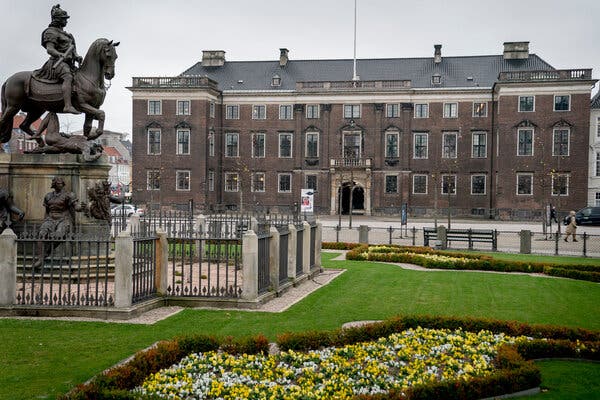 In a statement accompanying the görüntü, the artists said they wanted to pledge solidarity with people affected by Denmark’s colonial past, and to spark a dialogue with institutions created during that time. Under Frederik V, the government heavily subsidized the nation’s slave and sugar trade, and administered its colonies.

“We want an arka world that relates to and takes responsibility — not only for the actions of the past, but for the ways in which colonialism is still active today,” the group said.

Even months later, the ensuing dust-up has laid bare deep schisms in Danish society over how to reckon with its colonial past.

The Academy Council, an artistic advisory board that owns the bust, condemned the taking of it, arguing that while it was imperative that past abuses not be downplayed, it was also worth noting that slavery was common in Frederik V’s era. “It is also important that we do not impose the norms of our time on the past,” the statement said.

Some politicians and cultural leaders joined in denouncing the bust dumping as the epitome of cancel culture and identity politics run amok, some going so far as to call it fascist. A prominent artist, Bjorn Norgaard, and the arka historian, Merete Jankowski, wrote articles likening “the happening,” as the artists called it, to extremists’ blowing up the sixth-century Bamiyan Buddha statues in Afghanistan.

“The methods of identity politics are intolerance, exclusion, cancel culture — and physical destruction, as we have seen at the Academy of Fine Arts,” wrote Tom Jensen, the editor in chief of Berlingske, the Danish newspaper, in an op-ed. “The mind-set is insanely extreme. Nothing must be left, everything existing must be leveled.”

That the sunken bust was a decades-old plaster replica and not the 18th-century original did little to lessen their outrage. By the time the bust was fished out of the harbor, seawater had eaten away its shoulders and head.

The plaster bust of the king suffered significant damage before it was pulled from the harbor in November. Credit…Jesper Houborg/Ritzau, via Associated Press

About a week after the video’s release, a department head at the Arka Academy, Katrine Dirckinck-Holmfeld, stepped forward to take responsibility for the sinking. She was fired the same day, and became a focal point for opprobrium. She has received the support of nearly 1,000 petitioners, many of them artists and students, calling for her reinstatement, but she has also been attacked online and threatened.

Weeks later, the school’s head, Kirsten Langkilde, also left her post. Though Ms. Langkilde had condemned the act, the Ministry of Culture attributed the parting to disagreements about “how to handle a number of challenges” at the school, which was founded more than 265 years ago and is one of Denmark’s most esteemed academic institutions. The acceptance rate for undergraduate programs is 5 percent, and prominent alumni include the artist Olafur Eliasson, and the designer and architect Arne Jacobsen.

Ms. Dirckinck-Holmfeld said she had hoped to trigger a broader reflection on cultural institutions’ role during the colonial period, and link that colonial legacy with controversial policies currently in place, namely the so-called ghetto laws. Defended by the government as a way to dismantle poorer non-Western immigrant enclaves so as to more fully integrate Danish society, the sweeping set of initiatives is criticized by many as harsh and discriminatory.

“This is about confronting our own image,” Ms. Dirckinck-Holmfeld said. “In Danish consciousness, there’s this idea that we were a very small and friendly colonial power, and also that racism is an American sorun.”

Katrine Dirckinck-Holmfeld, an artist who led a department at the Royal Danish Academy of Fine Arts, was fired by the school after taking responsibility for the dumping of the bust. Credit…Carsten Snejbjerg for The New York Times

Frederik V wasn’t the first Danish statue to be targeted by protesters last year. Figures of the missionary Hans Egede in Greenland and Copenhagen were daubed with red paint and inscribed with the word “decolonize” last summer. Not long after that, at the Copenhagen waterfront, the words “racist fish” were spray painted on the plinth of the Little Mermaid sculpture — which has been repeatedly vandalized and even decapitated over the years — to some puzzlement over the motives.

But even as monuments were toppled in America and Britain last summer by activists for racial justice, many Danes have not considered statues of their 18th-century royalty as problematic, and view actions against them not as expressions of free speech, but impediments to it.

(After the Egede statue in Greenland was vandalized, Greenlanders voted to keep it in place.)

“It’s the logic of deflection,” said Mathias Danbolt, an associate professor in arka history at the University of Copenhagen. “The scandal is never about the visual, political or cultural history of colonialism. The scandal is always about the accusation of this.”

Denmark was long considered a minor player in the slave trade, though recent research out of Harvard has challenged that view. The nation’s colonies included the Danish West Indies, now the U.S. Virgin Islands; Greenland; the Faroe Islands; and Iceland, with minor posts in parts of India and what is now Ghana. In Frederik V’s time, sugar from the West Indies was a major source of the country’s wealth, and some of Copenhagen’s most beautiful buildings of the era were built with lucre from the colonial trade.

Denmark was the first nation in colonial times to issue a moratorium on the slave trade, in 1792, though it gave the colonies until 1803 to acquire enough slaves to become self-sufficient, according to Lars Jensen, an associate professor at Roskilde University. By the time decolonization began in earnest in the 20th century, Denmark had sold or ceded nearly all of its colonies, with the exceptions of Greenland and the Faroe Islands (Iceland became independent during World War II).

There is disagreement over the extent to which Denmark is reckoning with that past.

Joy Mogensen, the country’s culture minister, said in an email that there was a “vivid debate” in the country about its colonial history. She pointed to a sculpture called “Freedom,” a gift from the Virgin Islands that was prominently positioned in central Copenhagen as a reminder of what Mogensen described as “a shameful chapter in our history.” Another statue, “I Am Queen Mary,” created by Black artists and erected in 2018, commemorates a leader of a 19th-century labor rebellion against Danish colonial rule in St. Croix .

“It’s important that we as a nation understand our past and are aware of the doings of our ancestors,” Ms. Mogenson said. But, she said, the Frederik V sinking was an act of vandalism, and teachers at public institutions had moral obligations to act as role models.

But Mr. Jensen, who specializes in postcolonial studies, said there was a blindness in Denmark about the extent of its colonial past and that, he said, informs attitudes toward and treatment of migrants and refugees.

“The notion Danes have of themselves is they built this immaculate welfare society, and built it so to speak singlehandedly by themselves, without help,” Mr. Jensen said. “All the economic funds that flowed in because of the colonial trade doesn’t fit that well into that picture.”