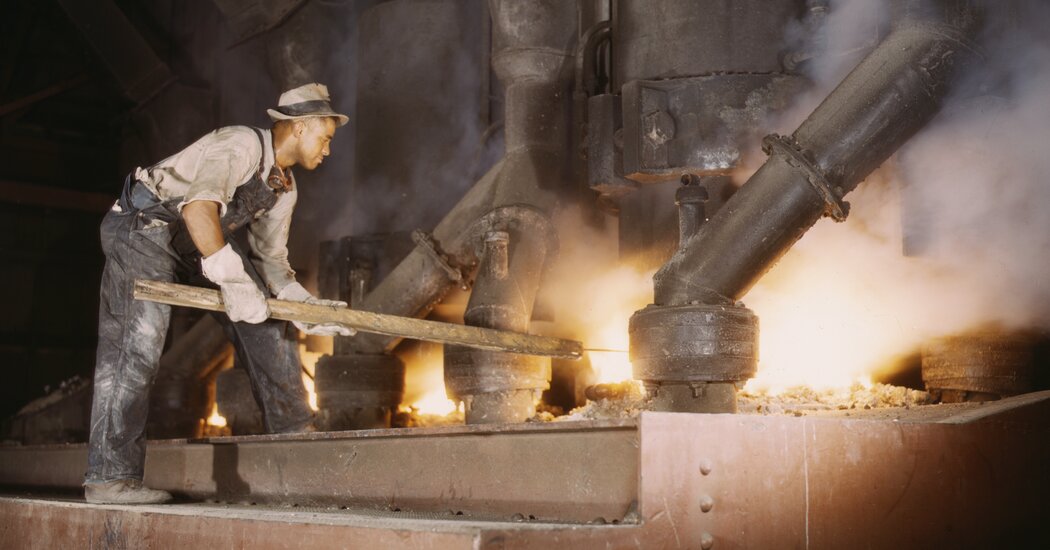 The Deep South is not generally known for its labor agitation, which is why it might come as a surprise for some to learn that it is in Alabama where workers have mounted one of the largest and most aggressive efforts to unionize Amazon in recent memory.

More than 2,000 workers at a fulfillment center in the city of Bessemer, just outside Birmingham, have indicated support for a union election. An estimated 85 percent of the work force is Black, and their union drive — which ties labor issues to Black Lives Matter and issues of racial equality — illustrates the extent to which racism and class exploitation are tied up with each other.

The size, scope and sophistication of the union drive in Bessemer should complicate commonly held ideas of Alabama and the Deep South as backward and relentlessly hostile to progress. It should be a reminder of the ways in which the fight for racial equality has historically been one for the dignity of labor as well. And it stands, as well, as an opportunity to explore a side of the state’s history that gets worse than short shrift in our collective memory.

To many Americans, Alabama is a synecdoche for the worst of Southern reaction. It is George Wallace in Montgomery in 1963, pledging “segregation forever.” It is the 16th Street Baptist Church in Birmingham the same year, where four young girls were killed in the name of hate. It is Jim Clark and his posse in Selma, ready to attack peaceful protesters on the Edmund Pettus Bridge. And in the present, men like Jeff Sessions and Roy Moore stand as living links to Alabama’s history of reactionary politics as well as its continued resilience.

But the strength of reaction in Alabama is a function, in great part, of the state’s tradition of Black politics and Black radicalism. In the wake of emancipation, formerly enslaved Blacks established Union Leagues, where they organized for self-defense and agitated for yasal and political equality. League activists, the historian Michael W. Fitzgerald writes in “Reconstruction in Alabama: From Civil War to Redemption in the Cotton South,” “critiqued the ills of the plantation system and explained how Reconstruction could facilitate a more democratic social structure.” In secret meetings away from hostile whites, freedmen gave radical speeches that “politicized the prevailing discontent over the labor system,” speaking to frustration “over the holdovers of slavery.”

In the 1880s, Black farmers and sharecroppers throughout the state formed “colored” chapters of the Agricultural Wheel, a cooperative alliance of farmers devoted to debt relief, the end of one-crop farming, the nationalization of the railroads and the strict regulation of banks and businesses.

“All of these local groups,” explained the historian Paul Horton in a 1991 article for The Journal of Southern History, “supported increasing funding for education, eliminating state olağan schools, building more local schools, abolishing federal banks, inflation, a high tariff to protect the farmer, abolishing the Electoral College, a secret ballot, reducing the hours of labor, and prohibiting contract labor.” Although white and Black Wheelers could not overcome the twin forces of racism and capital, they prefigured a radical politics that would flourish among Black industrial workers in the next century.

That radicalism was at its strongest within the International Union of Mine, Mill and Smelter Workers. “Originally an outgrowth of the Western Federation of Miners, a militant union that helped launch the I.W.W. in 1905, Mine Mill developed a national reputation as a radical, left-wing union during the 1930s,” the historian Robin D.G. Kelley writes in “Hammer and Hoe: Alabama Communists During the Great Depression.” Most members of the union — like most iron ore miners in Birmingham, where the state’s steel industry was headquartered — were Black, and while its high-ranking officials were white, Black workers held the majority of middle- and low-level leadership positions within the union. Included among them were Communists, who helped spearhead Mine Mill’s organizing drive in the wake of the 1933 National Industrial Recovery Act, which had opened the door to unionization in large swaths of the economy.

“Union meetings were held in the woods, in sympathetic Black churches, or anywhere else activists could meet without molestation,” Kelley notes. “Company police used violence and intimidation in an effort to crush Mine Mill before it could establish a following, but when these tactics failed, officials exploited racial animosities.” To that end, the largest steel company in the area, the Tennessee Coal, Iron and Railroad Company, created a company union that weaponized racism and anti-Communism to attract white workers and weaken Mine Mill.

For most of the next 20 years, the Black workers of Mine Mill would struggle against racism and capital in a singular push for racial equality and the emancipation of labor, neither of which could exist without the other. And while they would ultimately lose their fight — overwhelmed by the steel industry, its red-baiting in Washington and its own private army of racist vigilantes — the spirit of Mine Mill would live on and not just through the civil rights movement.

In the early 1970s, for example, a grass-roots workers organization called the Public Employees Organizing Committee strove to unionize Birmingham’s predominantly Black hospital and nursing home employees. The work of the committee, notes the historian Robert W. Widell, Jr. in “Birmingham and the Long Black Freedom Struggle,” “emphasized cross-racial solidarity” and “placed struggles over the workplace at the center of an expansive freedom agenda.”

Whatever its outcome, the Amazon unionization drive in Bessemer is part of this history, and its organizers are working in the tradition of what the historian Robert Korstad called the “civil rights unionism” of Black workers combining “class consciousness with race solidarity.” If it is these workers who, among so many others, stand a real chance of unionizing Amazon, then you could say that they owe it, in part, to their heritage.

As for all of us outside Alabama? We should remember that the political character of the South is more than its shading on an Electoral College map; that the entire region is home to a rich history of resistance against the twin forces of race hierarchy and class exploitation; and that a more just and equitable future may well depend on how much we take those histories to heart and build on them from there.