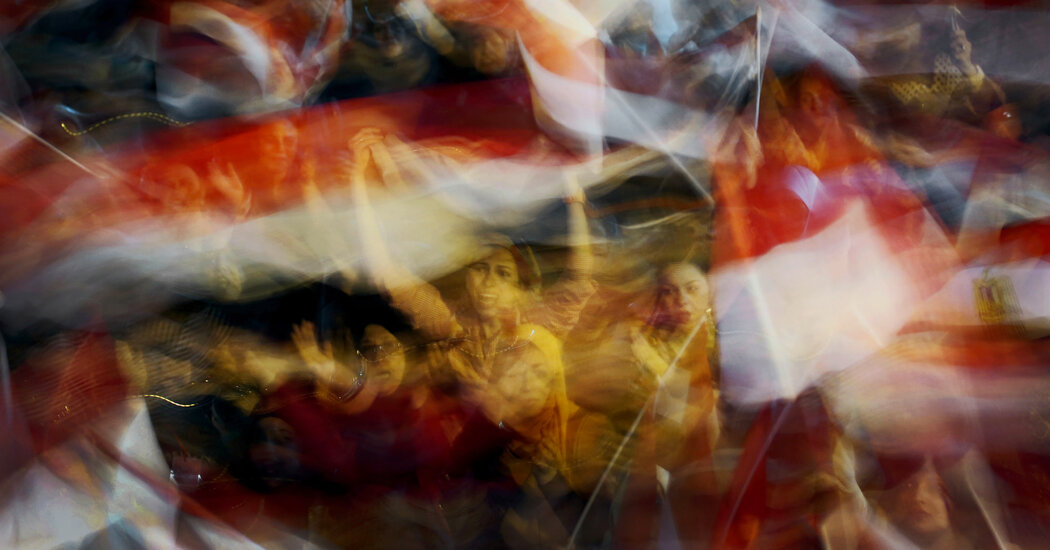 Goons with clubs and machetes had established a makeshift checkpoint outside Tahrir Square in Cairo to beat pro-democracy protesters, and my heart sank when I saw the thugs intercept two frail women and menace them.

But the women, sisters named Minna and Amal, stood their ground that day during the Arab Spring a decade ago. I stepped forward to interview the women and also the thugs, who were holding straight razors and clubs with nails embedded; with violence oddly on pause for a joint interview, I asked Minna and Amal why they risked so much to seek political rights.

“We need democracy in Egypt,” Amal said simply. “We just want what you have.”

The quiet, indomitable courage of Minna and Amal is one of my most powerful memories from Arab Spring. There are so many like Minna and Amal who risk beatings, torture, rape and murder to stand up for democracy — and I keep wondering why we Americans, with nothing to lose, too often over the years have been unwilling to do the same.

The United States has been particularly complacent about human rights in Saudi Arabia. Loujain al-Hathloul, a Nobel Peace Prize nominee, has been imprisoned, tortured and sexually abused for trying to promote women’s rights. Instead of championing her and other imprisoned activists, the Trump administration protected their persecutor, Crown Prince Mohammed bin Salman of Saudi Arabia, often known as M.B.S., even though he also presided over the murder of a Washington Post columnist. In his spare time, M.B.S. created the world’s worst humanitarian crisis, in Yemen.

Now change is in the air. The White House said Tuesday that President Biden is “going to recalibrate our relationship with Saudi Arabia” and would deal not with the crown prince but with his ailing father, King Salman.

Saudi officials see which way the wind is blowing. This month they finally released al-Hathloul, and they also seem ready to resolve the catastrophe in Yemen. In fairness, Saudi Arabia under M.B.S. genuinely has improved conditions for many women and has scrubbed textbooks of hateful language directed at Jews and Christians (the textbooks continue to disparage Shiite Muslims). On a visit to Riyadh, I found him popular among young Saudis, who saw him as a breath of fresh air.

Yet while al-Hathloul’s release is welcome, she still cannot travel or speak about what she endured. Many other innocent Saudis remain behind bars, including several women’s rights activists and the blogger Raif Badawi, who was sentenced to 1,000 lashes and 10 years in prison (950 of the lashes were dropped).

The bottom line is that M.B.S. is damaged goods. King Salman and other Saudi royals should understand the reality that if M.B.S. indeed becomes the next king, the country’s relations with America may not recover for decades.

Maybe you’re rolling your eyes at all this. Some practitioners of realpolitik see concern for human rights as wimpish and believe what really matters is that a nation is strong, feared and equipped with a mighty military. They warn that glib idealism leads to disasters like the civil war in Libya and that what advances the interests of Americans and foreigners alike are stability and working relationships with sometimes odious strongmen.

My answer is that we must balance our interests and our values. We’ve seen the limits of raw idealism in Libya, but also the limits of raw military power in Iraq and Afghanistan. We achieve change sometimes by dropping bombs, yes, but sometimes by supporting education and human rights, including women’s rights. The Taliban shot Malala Yousafzai because they understand that in the long run, the greatest threat to extremism isn’t a drone overhead but a girl with a book.

Tawakkol Karman, a Yemeni woman who won the Nobel Peace Prize for her leadership during the Arab Spring, told me that the world is waiting to see if Biden will press regimes to release detainees and uphold women’s rights. “The world is watching U.S. policy to make müddet that Trump is an abnormal case in the U.S. foreign policy, and not an American approach,” she said.

The world is painted in grays. Barack Obama believed in human rights, but he allowed hundreds of thousands of Syrians to be slaughtered because he worried about entering a quagmire.

Egypt’s repressive regime is already challenging Biden by detaining relatives of an Egyptian-American activist, Mohamed Soltan. It’s not clear what leverage Biden has to help pro-democracy protesters in Myanmar or dislodge a dictator in Venezuela, let alone to end a cultural genocide in China’s Xinjiang region.

We should seek inspiration from brave women like Minna and Amal in Egypt, or al-Hathloul in Saudi Arabia. If they, armed only with principles, can stand up to thugs and dictators abroad, then surely we can too.