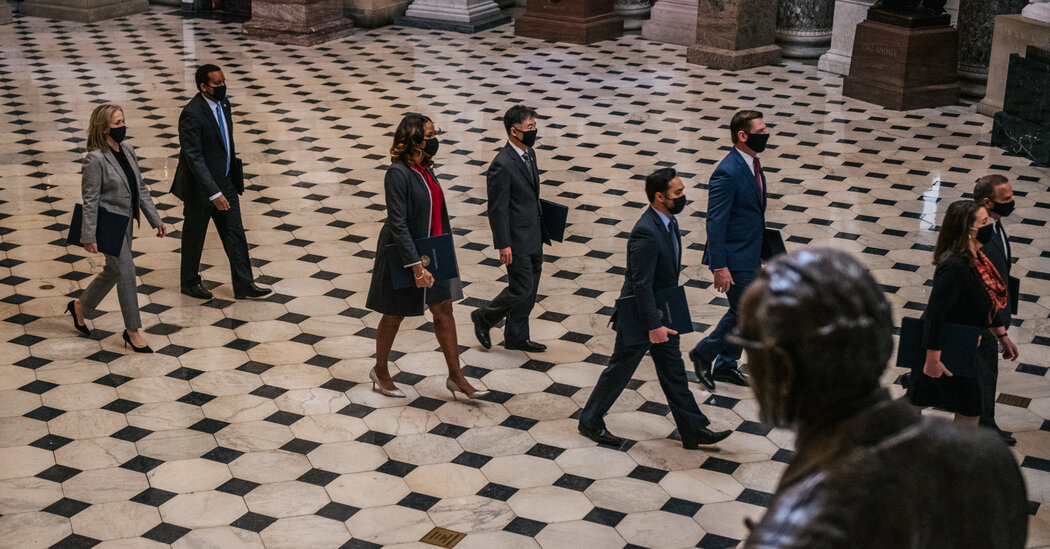 The first Trump impeachment trial, one year ago, was conducted by a Republican-led Senate that refused to take it seriously, and even to hear witnesses. Everyone could see from the outset it would end with an acquittal.

This new trial will be run by a Democratic-led Senate, and while it is far from likely that 17 Republican senators will join the Democrats to convict the ex-president, neither is it impossible. The crime is quite clear, and the evidence will be overwhelming.

The way I see it, there are only two possible outcomes. Either Donald Trump will be found guilty, or the Republican Party itself will be seen by sensible people to be guilty. Republican senators who wish to avoid the second outcome need to vote to convict.

I think the key to the impeachment trial is not that Donald Trump started the insurrection, but that he could have stopped it. And he didn’t.

That President Donald Trump should be forced to go through a second impeachment trial is both a travesty and an insult to all those who support him. I wholeheartedly agree with Senator Rand Paul that this farce is unconstitutional. The 45 patriotic Republican senators who support that unassailable truth should not grace the Senate with their presence. They should simply stay away. That would send a message as to the certainty of their beliefs.

If it leads to the conviction of Mr. Trump, so be it. At least those 45 patriots will have maintained their personal integrity and adherence to the Constitution.

Leave the farcical trial to the Democrats and those five Republicans in name only.

To the Republican Senators:

C’mon, guys. If Donald Trump cannot be tried because he was impeached before his term expired but the trial will occur after, then he could have dumped all kinds of classified documents in Vladimir Putin’s lap in a fit of pique in his last week in office and nothing could be done about his being returned to office in 2024.

For those who fear retribution from his base: If Mr. Trump cannot be re-elected, his base will move on, and he will sink into a well-deserved oblivion.

Michelle Goldberg is absolutely right in pressing the impeachment managers to call witnesses (“Even if You Want to Forget Trump, His Trial Must Be Thorough,” column, Feb. 9).

In addition to calling to testify some of the Capitol Police officers injured that day, the managers need to subpoena Donald Trump himself. Whether he fights the subpoena (showing he believes himself above the law) or actually testifies about what he did and why (at which point he can’t help but perjure himself, being the pathological liar he’s consistently proven himself to be), the public and the Senate will be left with no doubt of his guilt. It might even be the only way to jolt enough Republican senators to convict him.

To skip calling witnesses — especially Mr. Trump himself — is to favor short-term expediency over long-term healing.

There’s one potential witness whose perspective is especially germane to the impeachment trial — and what a shame that he won’t be called to testify. Mike Pence was Donald Trump’s most loyal ally, until the ask became too much even for him. We may never know how close Mr. Pence came to being hanged on those ugly gallows, but it clearly could have happened were it not for the courage and quick thinking of a Capitol Police officer, Eugene Goodman, who led members of the mob in the wrong direction.

Mr. Pence surely wants to run for president in 2024. But on Jan. 6, he also wanted to live. Wonder if he’d agree that Mr. Trump did not incite anybody to do anything.

This impeachment proceeding is similar to a trial, except some of your cohorts in crime get to serve on the jury.

Donald Trump’s defenders argue that in his Jan. 6 speech he did not incite the violent invasion of the Capitol by his supporters. Despite telling them to fight for him again and again, he also said “everyone here will soon be marching over to the Capitol building to peacefully and patriotically make your voices heard.” But it is the height of naïveté to believe that words in a political speech can be understood in isolation from their context.

Consider the most famous example of mob incitement in literature, Shakespeare’s unforgettable rendering of Mark Antony’s oration at the funeral of the assassinated Julius Caesar. Prohibited from criticizing the killers, Mark Antony makes kaç. He gets the violence he wants from the Roman crowd with a famous irony, praising the conspirators and insisting that Brutus is certainly an honorable man. His rhetoric unleashes a riot.

Michael Meltsner
Cambridge, Mass.
The writer is a professor of constitutional law at Northeastern University.