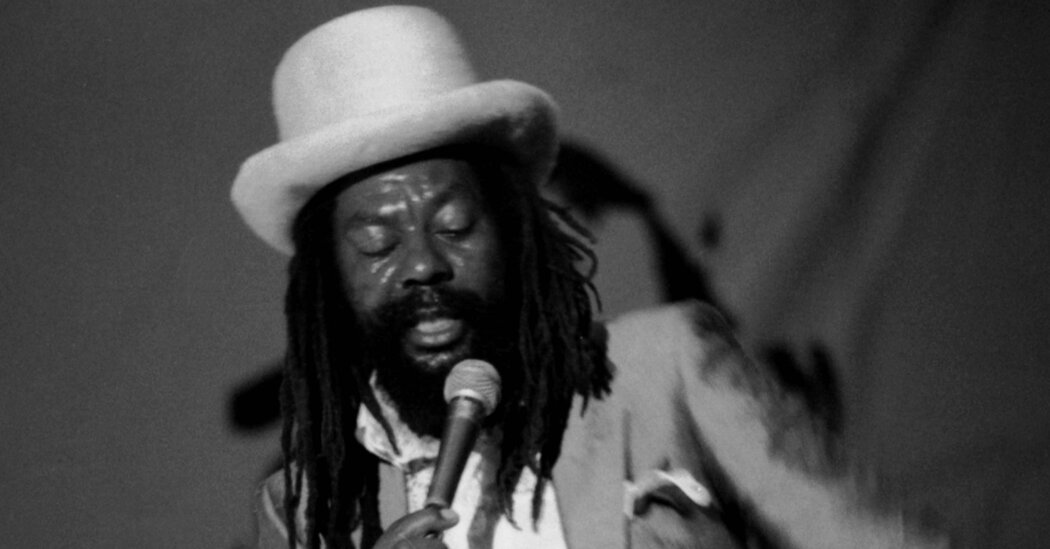 U-Roy, who helped transform Jamaican music by expanding the role of D.J. into someone who didn’t just introduce records but added a layer of vocal and verbal improvisation to them, a performance that was known as toasting and that anticipated rap, died on Wednesday in Kingston, Jamaica. He was 78.

His label, Trojan Records, posted news of his death, in a hospital, but did not give a cause.

U-Roy, whose real name was Ewart Beckford, wasn’t the first toaster, but he expanded the possibilities of the form with his lyricism and sense of rhythm. Just as important, he took it from the open-air street parties, where it was born, into the recording studio.

In 1970, his singles “Wake the Town,” “Rule the Nation” and “Wear You to the Ball” held the top three positions on the Jamaican charts. Those songs and his subsequent debut album, “Version Galore,” made him a star not only in Jamaica but also internationally.

His “inspired, lyrical, goofy and always swinging toasts” (as Billboard evvel put it) made him the king of the form, earning him the nicknames Daddy U-Roy and the Originator (although he acknowledged that D.J.’s like King Stitt and Count Machuki worked the territory before him).

“He elevated talking and street talk to a new popular arka form,” Steve Barrow, author of several books on reggae history, told The Daily Yamiuri in 2006. “So I think we can call him the ‘Godfather of Rap,’ because he did that on record before anyone was rapping on record in America.”

In 2010 U-Roy recalled his breakthrough with humility.

“Is jus’ a talk me have,” he told The Gleaner of Jamaica. “Is like the Father say, ‘Open up your mouth and I will fill it with words.’”

Ewart Beckford was born on Sept. 21, 1942, in the Jones Town section of Kingston. In his youth the music of Jamaica began to be disseminated by “sound systems,” groups of D.J.’s and engineers with portable equipment who would set up for street dances and parties. A D.J. would introduce the tracks and fill transitions with patter.

U-Roy never made it through high school; he was D.J.-ing at 14. He made his professional debut at 19, working with the sound systems of Dickie Wong and others. Later in the 1960s he teamed up with King Tubby, who had one of Jamaica’s more famous sound systems and was developing the genre known as dub — bass-heavy remixes of existing hits that played down the vocal tracks and that left U-Roy plenty of space to toast.

“That’s when things started picking up for me,” he told The Los Angeles Times in 1994.

Duke Reid, a leading producer, heard him at a dance and brought him into the studio for his breakthrough recordings. He quickly stole the spotlight from the singers on the tracks, earning top billing and becoming a star in his own right.

In the late 1970s, U-Roy had his own sound system, in part to foster new toasting talent.

“That was the biggest fun in my life when I started doing this,” he told the magazine United Reggae in 2012.

His influence was profound. U-Roy and fellow Jamaican toasters provided a foundation for hip-hop in the early 1970s. D.J.s at parties in New York City, notably the Jamaican-American DJ Kool Herc in the Bronx, picked up the idea of Jamaican toasting and adapted it to rapping over disco and funk instrumentals.

In 2007, U-Roy was awarded the Jamaican Order of Distinction.

He released numerous singles and albums across a half century. His recent albums included “Pray Fi Di People” (2012) and “Talking Roots” (2018).

Information on his survivors was not immediately available.

U-Roy collaborated with numerous artists over the years, including some from Africa. In 2010, he still seemed surprised at the stir he had caused when he visited Ivory Coast on a tour.

“In the airport is like every customs officer, every man who work on the line, want to take a picture with me,” he told The Gleaner.

“If me come out of the hotel me have to have security,” he added. “Is a mob.”