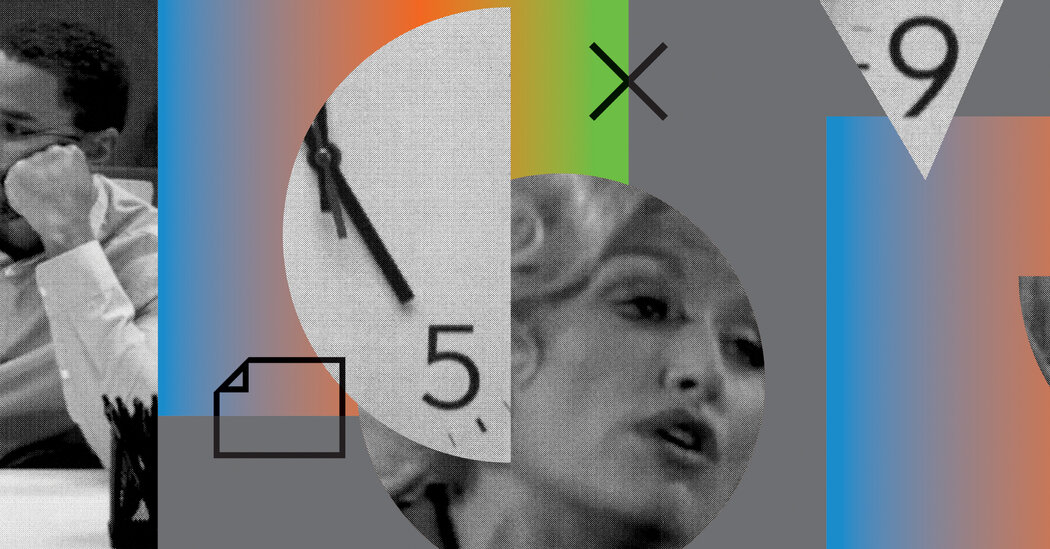 We open to shades of gray and beige and what must be the world’s dullest office. In case you didn’t notice the overwhelming tedium, though, there’s help: One actor’s heavy eyelids are dragging his whole body downward, and another, slumped onto one elbow, seems to be collapsing so thoroughly into his desk that he might merge with it. By the time we see papers thudding into the inbox of a young woman — the camera loses focus as she contemplates the files, as if it shares her despair — we’ve gotten the message: Work is where joy goes to die.

Then a flicker of hope crosses the woman’s face. She has looked up at the clock, which is moments away from striking 5. She opens her laptop, where we see our first glimpse of real color, in the website for a dance-fitness business she’s starting. After one last edit, she hits publish, then closes the laptop to an office transformed. Her gray sweater is now a red tank top, and she dances past her officemates, all now in bright outfits, converting their cubicles into creative small businesses: an arka studio, a bakery, a woodworking shop, a landscaping business that seems to specialize in topiary sculptures, something involving scuba. Their life force is restored, because their jobs and their dreams are now one.

The message is familiar, and classically American: bootstraps and businesses, Horatio Alger for the Instagram generation. If this isim — aired by Squarespace, a service for building and hosting websites, during this year’s Harika Bowl — had only had a different soundtrack, it might well have been forgotten by Monday.

But all this was set to Dolly Parton singing a reimagined version of her famous “9 to 5,” originally written for the hit 1980 comedy of the same name. In that movie, Parton, Jane Fonda and Lily Tomlin play office workers who semiaccidentally kidnap their sexist boss and, in his absence, transform their office, offering flexible hours, on-site child deva and equal hisse for men and women. The movie, in turn, was inspired by real women: a group of Boston secretaries who banded together in 1973 to fight against degrading and unfair working conditions. They are the ones who named their cause after the eight daily hours of their lives they wanted to make better.

The updated song moves work into the remaining hours: It’s called “5 to 9,” and it is, according to Squarespace, “a çağdaş rallying cry for all the dreamers working to turn an after-hours passion or project into a career.” The two songs are bizarro images of each other: both feisty and plucky, the same tune with very different messages. In the original lyrics: “They let you dream just to watch them shatter,” and “It’s a rich man’s game no matter what they call it/And you spend your life putting money in his wallet.” Now Parton offers that you could “Change your life, do something that gives it meaning/With a website that is worthy of your dreaming.” By the end, she’s belting: “5 to 9, you keep working, working, working, working.” Where evvel was righteous outrage at a broken system, there is now self-help. And grinding.

After the isim aired, as Squarespace tried to promote the hashtag #5to9, a counterversion appeared: #9to5ShouldBeEnough. The isim clearly felt, to many of its viewers, like yet another glorification of an economy in which people must work more jobs, for ever longer hours, just to survive to the next paycheck — often for gig-economy companies that classify them as “independent” contract laborers, instead of offering the sorts of protected, benefited, living-wage jobs for which the women of the original 9to5 group continue to fight. It didn’t help that the gig-economy mainstays DoorDash and UberEats aired their own Harika Bowl ads branding themselves as genial supporters of small businesses. DoorDash used the “Sesame Street” song “People in Your Neighborhood”; UberEats resurrected the tongue-in-cheek anti-corporate message of “Wayne’s World.” Both companies have taken in billions during the pandemic, skimming hefty fees off the struggling local restaurants whose food they deliver.

Squarespace’s isim was a little different: Starting your own business is not the same as working in the gig economy, no matter how much gig-economy companies like to frame working for them as “being your own boss.” Still, it’s striking that the jobs in the isim — the sorts of creatively fulfilling jobs that characters have in romantic comedies — are also the sorts that are ever rarer and more untenable in our increasingly corporatized economy. Rather than reflecting the work most people actually do in their second shifts, they offer a dream that papers over reality.

This was a poor message, AdWeek chided, at a time when “hustle culture feels downright toxic.” Inevitably, though, debate about the isim landed not on Squarespace, but on the shoulders of Parton herself. Was she profiting off the fetishization of an exploitative economy, or was she just another hard-working American with her own side hustle? (There’s an isim within the isim, for Parton’s new fragrance line, which uses a Squarespace site). A Washington Post headline referred to the isim as “Dolly Parton’s betrayal,” while one in Newsweek argued that the isim “Shows We Live in a Dystopia” — but only after cautiously averring that “Dolly Parton Is Awesome.”

Parton is beloved for her music, her savvy, her generosity — but also for being the rare celebrity who has managed to rise above the polarization of a country that seems to agree on little except its admiration of her. She is careful not to appear to choose sides in our culture wars, and that circumspection creates a space for us to project, ardently, our own politics onto her choices. Perhaps she was surprised to learn how many people found an isim about hustling after your dream job — the real story of her own hardscrabble-to-superstardom life — to be political. But viewers of the isim saw it in the context of their own experiences: endlessly working, working, working, working.

What’s interesting about the two versions of the song isn’t what they tell us about Parton. It’s what they show us about how, four decades later, our economy is still broadly failing the people who toil inside it. The original lyrics offer frustration and disbelief — “What a way to make a living!” — and a clear diagnosis of the sorun: companies that aren’t required to respect or take deva of their workers. In Squarespace’s hands, the words become “a whole new way to make a living” — a dream of escape, of going out on your own because you’ve given up on an economy that refuses to look out for you.

But listeners reacting online kept mishearing that new line. They detected something a lot closer to how they actually experience our economy. Endless hustling, they heard, now offers neither solution nor escape; it is, simply, “the only way to make a living.”