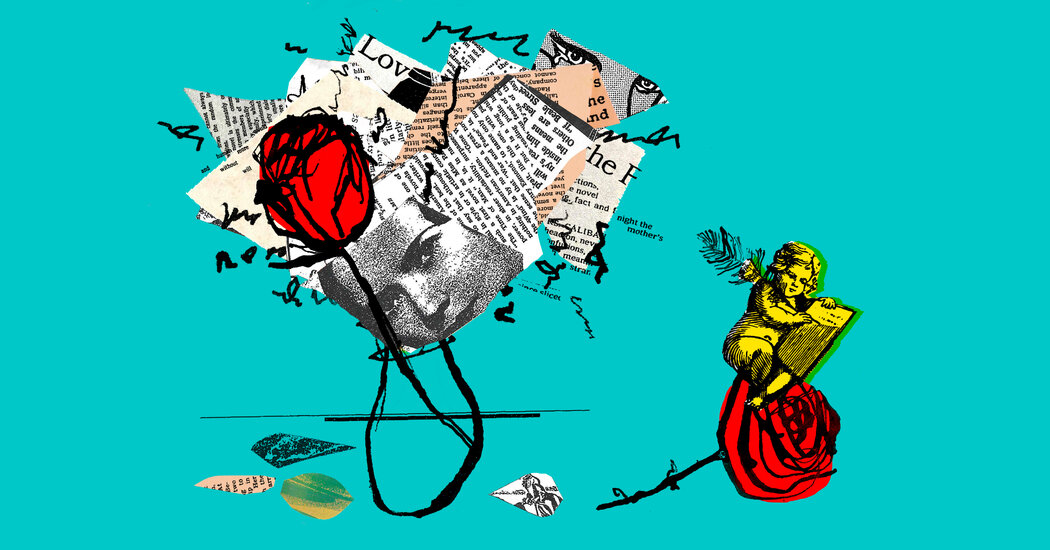 “Love is strange,” wrote Thomas Pynchon, citing the 1956 Mickey and Sylvia hit single, in his 1988 New York Times review of Gabriel García Márquez’s novel “Love in the Time of Cholera.”As we get older, he continued, “we may begin to regard love songs, romance novels, soap operas and any live teenage pronouncements at all on the subject of love with an increasingly impatient, not to mention intolerant, ear.”

This sort of marginalization of love stories — that, for one thing, they don’t qualify as “legitimate” novels — threads through the 125 years of The New York Times Book Review. And yet there are lessons to be learned about the necessary ingredients for a good love story from even these sorts of condescensions — along with the review that took them more seriously, of course. And not just romantic love, but love writ large: familial, platonic, universal, and so on. Perhaps, in a way, all stories are love stories, at least in part. Here are nine of those ingredients, as gleaned from the pages of the Book Review.

Tell us: What makes for a great love story?

It all begins with protagonists and those who surround them. An 1898 discussion of Jane Austen’s “Pride and Prejudice”inspired a mash note — one celebrating both Austen and her book’s lead, Elizabeth Bennet, among others — from a self-described “elderly” reader. 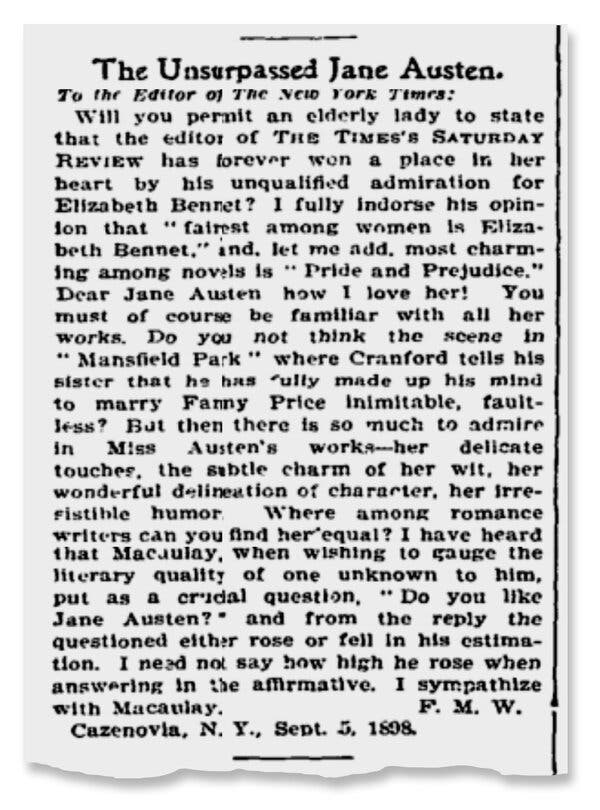 Just as the reader found Bennet “most charming,” reviewers through the years have homed in on an essential quality to creating unforgettable characters: a strong voice. A century after that letter, Miranda Seymour described the protagonist of Sarah Waters’s debut novel, “Tipping the Velvet,” a lesbian love story set in the Victorian era, this way: “This is the voice that holds our attention throughout the book, making even the most preposterous acceptable, because it remains intimate, so ordinary, so convincing.”

It is the subtle genius of the writer that brings such characters to life. “So little is said, so little is done, yet one feels the infinite passion in the finite hearts that burn,” wrote William Lyon Phelps in his 1920 rave of Edith Wharton’s “The Age of Innocence.” (He later called it “one of the best novels of the 20th century.”)

‘Whatever our souls are made of, his and mine are the same.’ — ‘Wuthering Heights,’ by Emily Brontë

Sometimes selling the romance simply takes two magnetic figures. In his 1936 review of Margaret Mitchell’s racially problematic “Gone With the Wind,” J. Donald Adams needed only to describe Scarlett O’Hara and Rhett Butler to entice the reader: Scarlett “is a vital creature,” he wrote, “alive in every inch of her”; Rhett a reinvention of “a stock figure of melodrama and romance, even to the black mustache, the piercing eyes and the irresistible way with women.”

A more unusual pairing can also do the necessary work, as in Rachel Ingalls’s “Mrs. Caliban,” reviewed by Michael Dorris in 1986. Dorothy, we’re told, has had a tough go of it, until she meets “a 6-foot-7-inch humanlike amphibian named Larry, a.k.a. Aquarius.” Need more? “To say that Larry finds the middle-aged Dorothy attractive is to put it mildly,” Dorris wrote, adding that they end up making love in multiple spots around Dorothy’s home.

‘Is not general incivility the very essence of love?’ — ‘Pride and Prejudice,’ by Jane Austen

But how interesting can a pairing be without conflict? This is made clear in one of the Book Review’s very first columns devoted to romance novels in 1901. An anonymous write-up of “The King’s Messenger,” a book by Suzanne Antrobus, about “the old Creole aristocracy” of New Orleans, noted that “the ardent lover” Capt. Laville was pitted against Rossart, the chief of police, who was “his deadly enemy and rival in love” as “the wooer of Lady Jeanne.” (Antiquarian spoiler: Though the writer claimed it would be “unfair to divulge the final scenes of the story,” it sounds like Laville comes out on top.)

Sometimes it is the very subject matter of a book that provides the conflict, as in “The Price of Salt,” by Patricia Highsmith, writing under the pseudonym Claire Morgan. (The book might be better known to cinephiles from Todd Haynes’s adaptation “Carol.”)

Carol, the older and richer woman, woos Therese; Therese “apparently cannot conceive of there being anything questionable about this relationship,” wrote Charles J. Rolo in his 1952 review. “And she thereby precipitates a crisis in which both have to make decisions that will lastingly affect their lives.”

In 1952, the very conceit of a lesbian romance was considered “explosive material.”

‘I wish I knew how to quit you.’ — ‘Brokeback Mountain,’ by Annie Proulx

Conflict, of course, readily leads to suffering. In her 2000 review of Haruki Murakami’s “Norwegian Wood,” Janice P. Nimura opened by quoting the Beatles song that inspired Murakami’s title: “I evvel had a girl / Or should I say, she evvel had me.” (Sounds like suffering.) The book is the story of Toru and his relationships with two women: Naoko (and her “increasingly fractured psyche” — more suffering), and later, his classmate Midori. “Safe havens don’t exist” in Murakami’s book, Nimura wrote, “and love is never truly unconditional.”

In other cases, the title alone can tip off emotional toll, as with Carson McCullers’s “The Heart Is a Lonely Hunter.” In her 1940 review, Rose Feld called the portrayal of John Singer, the book’s deaf and mute protagonist, whose friendships with three other men were “more often savage and violent than tender” — like a “Van Gogh painting peopled by Faulkner figures.”

‘You gave me a forever within the numbered days, and I’m grateful.’ — ‘The Fault in Our Stars,’ by John Green

What lies beyond suffering? Tragedy, of course. Death — in various forms — dominates this category. James Baldwin’s 1956 novel “Giovanni’s Room” is narrated by David, who is involved with a woman and another man, the titular Giovanni, who is to be executed for murder. In his review, Granville Hicks noted that despite that setup, the book’s true subject is “the rareness and difficulty of love.”

Murder is also at the center of Toni Morrison’s “Beloved,” reviewed in 1987 by Margaret Atwood. Sethe, the central character, is tormented by the ghost of her daughter, killed at age 2. And yet, “Sethe would rather have the ghost there than not there,” Atwood wrote. “It is, after all, her adored child, and any sign of it is better, for her, than nothing.”

As readers of “Beloved” know, the novel goes on quite a journey from there — but, like Sethe, is haunted throughout by tragedy.

More recently, death was a character in very different sort of book, “The Fault In Our Stars,” by John Green. “The grim reality is always present,” as Natalie Standiford put it in her 2012 review. Hazel, the novel’s heroine and narrator, has cancer, which leads her to Augustus, a former basketball player and cancer survivor.

Green does not shy away from confronting the juncture of love and death. “It is a narrative without rainbows or flamingoes; there are no magical summer snowstorms,” Standiford wrote. “These unpleasant details do nothing to diminish the romance; in Green’s hands, they only make it more moving.”

‘For you, and for any dear to you, I would do anything.’ — ‘A Tale of Two Cities,’ by Charles Dickens

If tragedy is one side of a coin, the other is sacrifice. And there are few novels filled with more sacrifice than Cormac McCarthy’s post-apocalyptic “The Road,” in which almost all life — human and otherwise — has been snuffed out. A father and son wander the desolate landscape, looking for … something.

The sacrifices are almost entirely the father’s; he must protect his son at all costs. In his 2006 review, William Kennedy wrote that, unlike McCarthy’s previous novels, “evil victorious is not this book’s theme,” but rather “the love between father and son.”

E.B. White’s “Charlotte’s Web,” about the love between a girl, a pig, a spider and their barnyard companions, was intended for a very different audience. Yet the two books share some common themes, which Eudora Welty listed in her 1952 review: “friendship on earth, affection and protection, adventure and miracle, life and death, trust and treachery, pleasure and pain, and the passing of time.”

‘I loved him as we always love for the first time — with idolatry, with transport.’ — ‘Candide,’ by Voltaire

Unsurprisingly, coverage of passion — and sex — in the pages of the Book Review has evolved over the years. But it’s always been there. In a 1901 letter, a reader who went by the moniker “Book Lover” complained that a review of George Trimble Davidson’s “The Moderns,” a melodrama about New York in the 19th century, didn’t capture the book’s fatal flaw: not enough sex.

“It is as you know a romance with ‘love interest’ as a paramount motif,” Book Lover wrote. “And yet when one stops to think of it there is nothing approaching a love scene in the whole book!”

By 1944, writers were providing readers like Book Lover with more of what they wanted. William Du Bois’s review of “Forever Amber,” a historical romance set in 17th-century England by Kathleen Winsor, claimed that “few characters in fiction are more beloved by female readers than the successful harlot.”

Cut to 1969 and Nora Ephron’s review of Jacqueline Susann’s “The Love Machine.” The subject — the love machine — is Robin Stone, who Ephron described as “positively insatiable” and “a magnificent sadist.” The book was a huge success; sex, as the saying goes, sells.

‘You are sunlight through a window, which I stand in, warmed.’ — ‘The Miniaturist,’ by Jessie Burton

Unlike the characters in Winsor’s book, other figures feel more grounded in reality, and reviewers have celebrated that. In James Baldwin’s 1974 “If Beale Street Could Talk,” two young lovers, Tish and Fonny, face challenges all too real to readers, particularly Black ones.

“It affirms not only love between a man and a woman,” wrote Joyce Carol Oates in her review, “but love of a type that is dealt with only rarely in contemporary fiction — that between members of a family, which may involve extremes of sacrifice.”

Helen Hoang’s 2018 “The Kiss Quotient” may have an unusual premise — an autistic woman who hires an escort for lessons in the bedroom — but, like Baldwin, she explores delicate subject matter with a compassionate, unblinking eye. In her review, Jaime Green noted that Hoang writes Stella, the protagonist, “with insight and empathy.”

‘That old saying, how you always kill the one you love, well, look, it works both ways.’ — ‘Fight Club,’ by Chuck Palahniuk

Finally, there’s the plot twist. (Details here will have to remain necessarily vague.) In Jay Parini’s 1990 review, the “Big Secret,” as he calls it, in A.S. Byatt’s “Possession” goes unrevealed, but Parini does describe the novel as “an unlikely but dazzling quest for what literary critics and historians evvel, with unfounded confidence, referred to as the Truth.”

Of course, the Book Review doesn’t just run reviews. A gossipy item from 1908, written by the single-named Galbraith, served up two theoretical real-life twists about a pair of classic romance novels. He offered a preview of a book by John Malham-Dembleby that suggested that Charlotte Brontë, not her sister Emily, wrote “Wuthering Heights”; and that both that book and “Jane Eyre” were “founded on a little guide book entitled ‘Gleanings in Craven,’ by Frederic Montagu.”

Malham-Dembleby’s book was published a few years later, but neither twist has been proven.

Dan Saltzstein is deputy editor for Special Sections at The Times.