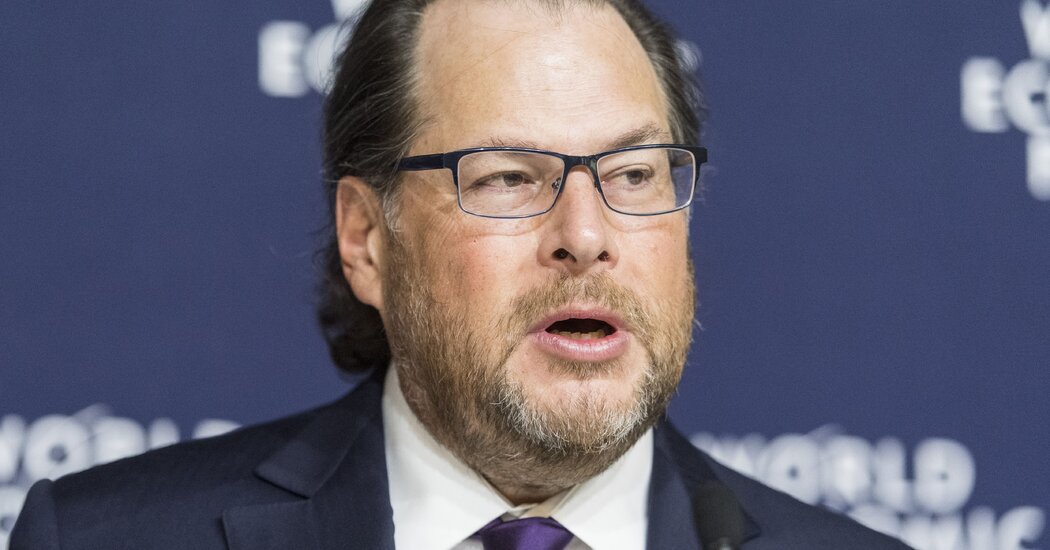 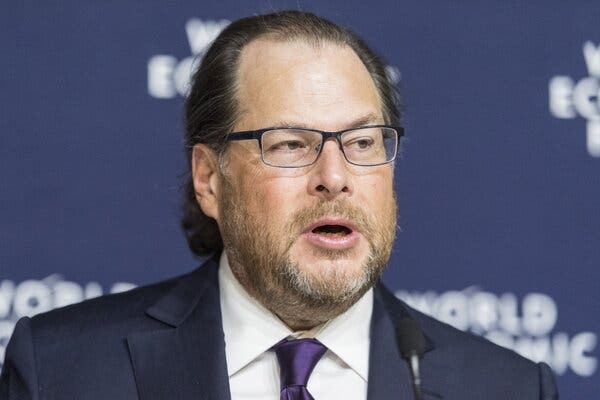 Marc Benioff of Salesforce has championed inclusivity in business, but a company policy may make it harder to diversify boardrooms.Credit…Alessandro Della Valle/EPA, via Shutterstock

A wrinkle in the push for more diverse directors

Business leaders, investors and regulators are all pushing to make corporate America’s boardrooms more diverse. But as a Salesforce executive learned, there are sometimes hidden hurdles to making that happen, Andrew writes in his latest column.

Niki Christoff sought to join the board of a publicly traded company, she told Andrew. But Salesforce allows only those who report directly to Marc Benioff, the company’s C.E.O., to become directors. (As senior vice president for strategy and government relations, she didn’t qualify.) She appealed to Mr. Benioff, but was rebuffed. Ms. Christoff accepted the board role anyway — and was fired.

Salesforce’s position isn’t unique. Many of America’s biggest companies don’t allow workers outside their topmost ranks to join external boards. This is a sorun, Andrew writes: “With so many employees trying to overcome barriers to promotions at their own employers, this creates a kind of systemic impediment to diversifying boardrooms.” The stats show that when women and people of color are hired on a board, they are more likely to be first-time directors than white men, less likely to be current or former chief executives, and tend to be younger.

The policy complicates efforts to diversify corporate boards. California law now requires companies incorporated in the state to have at least one female director, and both Nasdaq and Goldman Sachs have announced requirements for boards to pick more diverse candidates as a condition of working with them. Women now account for just under 30 percent of directors at the largest listed companies, while underrepresented ethnicities covering about 20 percent. Progress in pushing up those numbers has been slow.

The opportunity: Letting employees join boards could make them better leaders in their day jobs. As the executive search consultant James Drury told Andrew, “Until they sit in the seat of a board director, they don’t really understand the nature of the questions being asked in their own boardroom.”

Winter storms push oil prices up sharply. Frigid temperatures across the U.S. led to increased demand for heating fuel and threatened to cut oil and gas production in Texas. That drove the Texas benchmark for crude oil above $60 a barrel, while Brent crude climbed to a 13-month high.

The W.T.O. picks its first female leader. The World Trade Organization selected Ngozi Okonjo-Iweala, a Nigerian economist, to become its director general on March 1. She faces daunting challenges, including rising protectionism and a dispute-settlement system that remains crippled after challenges from the Trump administration.

Morgan Stanley may bet on Bitcoin. Counterpoint Küresel, a $150 billion unit of the firm, is weighing whether to let its clients invest in the cryptocurrency, Bloomberg reports. It’s the latest sign that Wall Street giants are under pressure to start accepting Bitcoin and other digital currencies.

Parler returns online. The conservative social network has reopened, weeks after being cut off by Amazon and other tech giants. Helping it is SkySilk, a small web-hosting provider that said it was aiming to preserve free speech.

Citigroup cuts its departing C.E.O.’s compensation 20 percent. The bank’s board said it had reduced the hisse of Michael Corbat to $19 million over “risk and control concerns,” alluding to continuing issues like the Wall Street firm’s mistakenly wiring $900 million to creditors of Revlon.

The consensus among scientists and supporters of the Paris climate accord — including the Biden administration — is that in order to limit küresel warming, greenhouse gas emissions must be reduced to zero by 2050. Hundreds of companies have pledged to meet or beat that deadline, and today IBM will say that its target to reach net zero emissions is 2030, putting it “years ahead” of the international schedule.

The tech giant is focused on “actual reductions” in emissions and increasing clean energy use in more than 175 countries where it operates. It pledges to get to net zero without relying on “the purchase of unrelated, unbundled renewable energy certificates” and will set interim deadlines to force accountability. These goal posts may help IBM avoid the criticism that Bank of America recently faced when it announced its goal to be net zero by 2050. “A destination without a complete road map isn’t going to cut it,” the Sierra Club’s Ben Cushing said of the bank’s plan, which he found insufficiently specific.

IBM’s announcement raises some tricky questions, like how to use technology to reduce the carbon footprint of fast-growing services like cloud computing. And some of the company’s proposed solutions — like carbon capture — have faced criticism for being less feasible and scalable than other means.

“The McKinsey I served was — in my experience — an honourable institution. How could this have happened to my beloved employer?”

— Tom Peters, the management guru and former McKinsey partner, in a Financial Times op-ed about the consulting giant’s role in the opioid crisis

The N.B.A. star Steph Curry. The Grammy-winning singer Ciara. The baseball manager Billy Beane. What do they have in common? SPACs, of course. We asked around why so many celebrities seem to be getting in on Wall Street’s latest trend.

Star power. Bringing in a celebrity to promote a product is nothing new. SPAC sponsors and other early investors appreciate the power of buzz, as demonstrated by the recent meme-stock frenzy. (Retail traders now account for roughly 20 percent of U.S. equity volume, double the share a decade ago.) The first-day rally in SPAC listings this year is running higher than ever.

Who’s who. Lead investors are scouring their address books for any celebrities they know to bring into deals. Bankers are brainstorming stars to add to transactions, sometimes via their wealth management arms. Hedge funds who buy into blank-check listings early are lobbying to get a high-profile name so it cuts through the noise. (Bankers speculate that Harika Bowl M.V.P. Tom Brady would be the ultimate celebrity SPAC partner of the moment.)

In other SPAC news: Bernard Arnault, the billionaire chairman of LVMH, is listing a SPAC in Amsterdam to target a deal in Europe’s financial services sector; Li-Cycle, a company that recycles lithium-ion batteries, is reportedly merging with a SPAC in a deal worth $1.7 billion; and the venture capital firm Khosla Ventures filed for three SPACs in one day to raise a combined $1.2 billion.