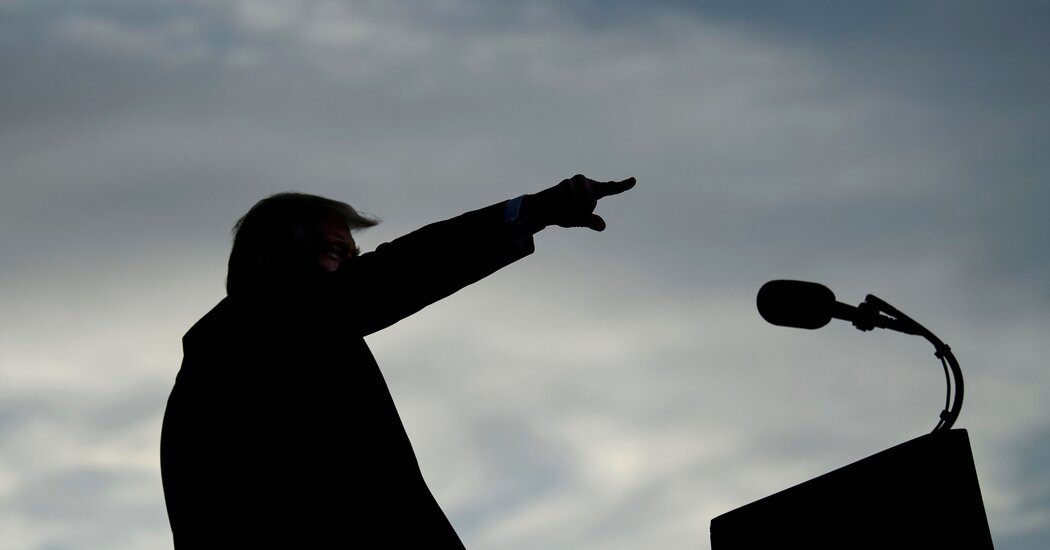 Five years ago, during a campaign rally in Iowa, Donald Trump famously said, “I could stand in the middle of Fifth Avenue and shoot somebody and I wouldn’t lose voters.” What no one knew at the time, but what the just-concluded impeachment trial showed in vivid and at times sickening detail, is that Mr. Trump was foreshadowing something worse.

The former president didn’t stand in the middle of Fifth Avenue; he stood in the middle of the Ellipse. He didn’t use a gun; the weapons he used were his words and Twitter account. Mr. Trump didn’t commit murder; instead, urged on by their beloved leader, a mob of hundreds of Trump loyalists “stormed and occupied the Capitol, disrupting the final electoral count in a shocking display of violence that shook the core of American democracy,” in the words of The Times. As a result of Mr. Trump’s actions a theoretical person on Fifth Avenue didn’t die; five actual human beings did, with many others badly injured.

But what Mr. Trump got right was in prophesying that he could act maliciously — and even seditiously — and still maintain the overwhelming support of both his base and Republican lawmakers. Representative Liz Cheney, who bravely voted to impeach Mr. Trump, correctly said that there’s never been a greater betrayal by a president of his office and his oath to the Constitution. The impeachment trial provided overwhelming, irrefutable — and in fact unrefuted — evidence that Mr. Trump was guilty as charged. He not only incited an insurrection; he delighted in watching it unfold in all of its violence, all of its devastation, all of its horror. For hours he did nothing to stop it.

Yet in the aftermath of that, the vast majority of Republican lawmakers stood where they always have for the last four years: shoulder-to-shoulder with Donald Trump. And precisely because they have done so, time and time again, we became inured to how troubling the alliance between Mr. Trump and the Republican Party turned out to be, with Mr. Trump’s senatorial defenders (or should I say praetorian guard) — Lindsey Graham, Josh Hawley, Ted Cruz, Ron Johnson and others — not only shameless and remorseless, but belligerent.

So why did Republicans, with seven honorable exceptions — Senators Mitt Romney, Susan Collins, Lisa Murkowski, Pat Toomey, Bill Cassidy, Richard Burr and Ben Sasse — profess their loyalty to a sociopath who has been exiled to Mar-a-Lago? Why do they continue to defend a man who lost the popular vote by more than seven million votes, whose recklessness after the election cost Republicans control of the Senate, and who is causing a flight from the Republican Party?

There are different, sometimes overlapping explanations. For some, it’s a matter of cynical ambition. They want to win over the loyalty of Trump supporters, who comprise a huge part of the base of the Republican Party. For others, it’s recognizing that standing up to Mr. Trump might make life quite unpleasant and even dangerous for them, exposing them to hazards that range from primary challenges to physical attack. And for still others, it’s driven by such antipathy toward the left that they will not do anything Democrats ask them to do, even if doing so is the right thing to do. These Republicans would much rather “own the libs” than side with them against a corrupt, corrosive former president.

There’s also the natural human reluctance to take a stand that puts you in conflict with your own political tribe, your colleagues, your friends. And there’s this: Over the course of the Trump presidency a lot of Republicans repeatedly — sometimes daily — quarantined their conscience in order to justify to others, and to themselves, their support for an unscrupulous man.

For people who are not themselves deviant to publicly defend a person who is creates cognitive dissonance and psychological conflict. It puts people at war with themselves. But over time, one step at a time, people condition themselves to make compromises. They twist themselves into moral knots as a way to justify their stance. They create a community to reinforce their rationalizations. And with each step down the moral staircase, it gets easier.

There is a reason that in the Trump era we keep returning to Eastern European analogues. Upon taking office as president in 1991, the Czech dissident and playwright Vaclav Havel said, “the worst thing is we are living in a decayed moral environment. We have become morally ill, because we have become accustomed to saying one thing and thinking another.”

For nearly a half-decade, Republicans became accustomed to saying one thing and thinking another. The impeachment vote was the last, best chance to break decisively with Mr. Trump. Yet evvel again most Republican lawmakers couldn’t bring themselves to do it. Mr. Trump still seems to haunt them, to instill fear in them. More than that, however: He has become them, weaving himself into their minds and communities so seamlessly that they are no longer capable of distinguishing their own moral sensibilities and boundaries from his, as they might evvel have done. After the disgraceful impeachment vote, the task for Republicans hoping to separate themselves from the Trump years, which was already hard, if not impossible, became harder still.

So for conservatives who are longing for a responsible political home and for those who believe healthy conservative parties are vital to the survival of democracy, what can be done to salvage the Republican Party?

To begin with, it needs leaders who are willing to say that something has gone very, very wrong. They don’t have to dwell on it, or make it the focus of their efforts every minute, but the next generation of Republican leaders cannot pretend that the last few years were politics as they ought to be. They need to acknowledge that a sickness set in and take steps to cure it.

From that should emerge a recognition that change is essential. That means putting in place a new intellectual framework, to do for the Republican Party in the 2020s what Bill Clinton did for the Democratic Party and Tony Blair did for the Labour Party in the 1990s, which was to break them of bad habits and modernize them. The situation is not exactly analogous (historical analogies never are), but there are some instructive similarities.

This is of course easier said than done, but Republicans need to move past cable news and talk radio. They must begin, again, to rely on think tanks and journals from various wings of the party to work toward a policy agenda to meet the challenges of the çağdaş world, as they did in the 1970s and 1980s. Republican leaders need to change the way their party thinks about itself, and therefore the way the country thinks about the Republican Party. One way to do that is for different figures to put forward their vision for a new Republican Party, to see what gains traction.

For example, Senator Romney’s Family Security Act is an ambitious policy aimed at slashing child poverty and strengthening families by reducing penalties for marriage. (It would provide a monthly cash benefit for families, amounting to $350 a month for each young child, and $250 a month for each school-age child.) There are some interesting ideas in the area of national service, including this one from the Brookings Institution’s Isabelle Sawhill and Richard Reeves, encouraging a year of national service after high school as a way to foster national unity by bringing young people of different races, ethnicities, income levels and faith backgrounds together to work toward a common purpose, but also as a pathway to college. Yuval Levin of the American Enterprise Institute is focusing his attention on ways to encourage social solidarity as a way to combat social alienation. My Times colleague David Brooks has written about this intellectual ferment on the right.

Right now all this may seem aspirational or even unachievable, but this is what has to happen if there is going to be a responsible conservative alternative to the Democratic Party. A new, post-Trump Republican Party should put in place a political infrastructure that supports conservatives in primary races who are responsible, intellectually serious and interested in governing rather than theatrics. Republicans need to talk about the country’s needs, not just the threats posed by the left. Having spread conspiracy theories and served as a battering ram against reality during the last four years, the Republican Party needs to root itself firmly in the world as it actually is. It must defend itself against QAnon and its allies whenever and wherever they present themselves, not just every evvel in a while. It must challenge those who want to make the Republican Party the nesting place of lunacy.

None of this will be easy, and it will certainly require developing new habits of thought after the Trump era. What is even more difficult is that it will require explicitly distancing the party from the irreconcilably anti-democratic and nihilistic element of Trump’s base. While post-Trump Republicans shouldn’t go out in search of a fight, this transformation cannot be accomplished without at some point confronting hard-core MAGA supporters who have made a living through lies and intimidation.

A new Republican Party won’t prevail if it enters this political battle defensively, halfheartedly, apologetically. The Kevin McCarthy model — weak, timid, unprincipled, cowering — is a loser. For Mr. McCarthy to have gone sınır in hand to Mar-a-Lago was shortsighted, to say the least. Mr. McCarthy may have thought that currying favor would keep Mr. Trump on side with the party in crucial 2022 House races, but, as nearly everyone can see by now, Trump’s team has only one member: himself. Whomever he does not dominate, he undermines or betrays; if Republicans do not disown him, he will continue to own them.

On the flip side, over the last few weeks, we’ve seen Representative Cheney, Senator Sasse and even Mr. Trump’s first U.N. ambassador, Nikki Haley, distance themselves from Mr. Trump because they recognize that his destructive narcissism can never be managed or contained.

That said, even if all the things that need to be done are done, and done well, the base of the party may still be too radicalized, too consumed by grievance, too enmeshed in conspiracy theories, too enamored with politics as blood sport — in a word, still too Trumpified — to ıslahat. But because we’re only in the very early stages of the post-Trump presidency, as in one sense his acquittal demonstrates, it’s too early for fatalism. It would be irresponsible not to search for embers in the ashes.

For half a decade, there have been far too few figures within the Republican Party who were willing to challenge Mr. Trump, to speak the truth people knew privately but hid publicly. But with Mr. Trump in temporary exile and the impeachment trial over, we’re about to see whether the Trump presidency was an aberration or a precursor, a parenthesis or part of a pattern. Was Mr. Trump’s acquittal the end of the Trump era or the beginning of something worse? Could this be the timid start of a new, post-Trump phase for the Republican Party?

I am not mühlet what to think, but I know what to hope.

Peter Wehner (@Peter_Wehner), a senior fellow at the Ethics and Public Policy Center who served in the Reagan, George H.W. Bush and George W. Bush administrations, is a contributing Opinion writer and the author of “The Death of Politics: How to Heal Our Frayed Republic After Trump.”