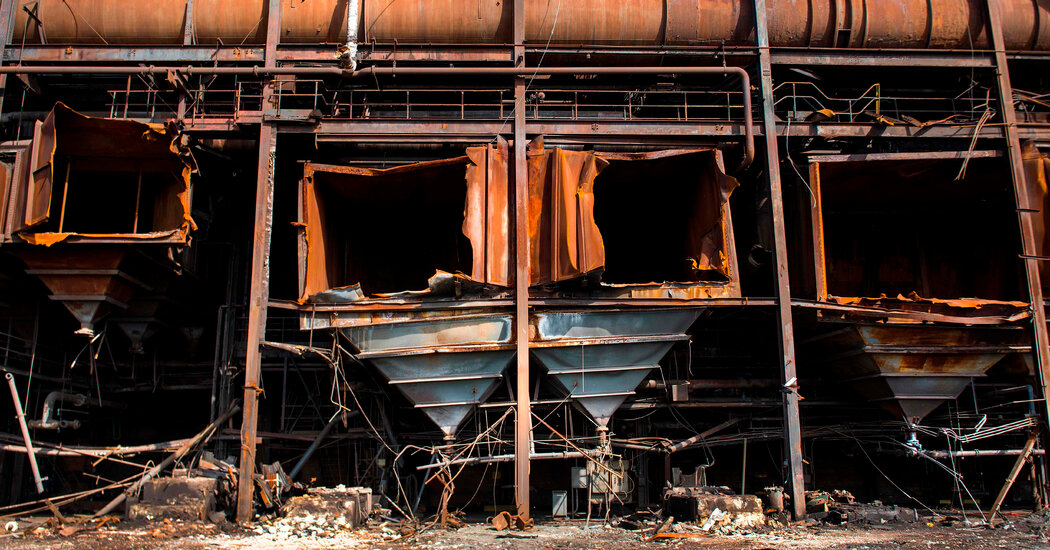 When I set out to report a book on the sorun of growing regional inequality in America, I did not expect that it would involve spending several hours on a cold winter day standing inside a large dumpster.

But there I was, helping a man named Keith Taylor toss all manner of trash from a giant receptacle to reach the treasure buried below: hundreds of bricks from the demolished headquarters of the sprawling Bethlehem Steel plant on Sparrows Point peninsula outside Baltimore.

Mr. Taylor, who started working at the plant in 1989 and spent the next 11 years there, wanted the bricks as part of his effort to reclaim the heritage of Sparrows Point. In the 1950s, Beth Steel, as locals call it, was the largest steel plant in the world, a dense skyline of chimneys and coal chutes abutted by a company town then home to more than 5,000 people.

Mr. Taylor planned to use the bricks for a new lighted walkway at Sparrows Point High School. I was there because I had come to see Sparrows Point as emblematic of the transformation of the U.S. economy over the past few decades and the gaping regional divides that this transformation had produced.

At its peak in 1958, the Beth Steel plant on the Point employed some 30,000; in its final years at the turn of this century — even as imports, domestic “mini-mills” and feckless management threatened its existence — veteran workers were still making at least $35 per hour, with excellent union benefits. The work was strenuous and frequently dangerous, but also purposeful and well-paid enough that many people spent their whole career there.

Since the plant closed in 2012, the Point has been wiped clear of virtually all traces of it. Starting in 2017, a new sort of work filled the void: logistics. The Point’s new owners leased land to first one and then a second Amazon fulfillment center, as well as warehouses for Under Armour, FedEx, Home Depot and Floor & Décor.

The work at Amazon was physically taxing in its own right, and was far more socially isolating than the foxhole camaraderie that had characterized Beth Steel, which helped explain why turnover was so much higher at the warehouse than during the steel years.

“It was a family thing — they looked out for one another,” said Bill Bodani Jr. of his time at Beth Steel, where he lasted three decades despite several workplace accidents. By the time he left in 2003 he, too, was drawing $35 an hour.

Over a decade later he went back to work at the Point, driving a forklift at Amazon. His hisse was around $15 an hour. He lasted only three years with the company, after clashing with a supervisor over his bathroom breaks and his encouragement of labor organizing among the younger workers.

Over the past four decades, deindustrialization, the rise of the tech economy and the weakening of antitrust enforcement have sorted the country into a small number of winner-take-all cities and a much larger number of left-behind cities and towns.

Evvel, wealth and prosperity were spread out across the country. In the 1960s, the 25 cities with the highest median income included Cleveland, Des Moines, Milwaukee and Rockford, Ill. By the middle of last decade, virtually all of the top 25 were on the coasts.

Meanwhile, the gap between wealthy and poorer regions has grown much wider. In 1980, only a few sections of the country had median income that were more than 20 percent above or below the national average. Today, big chunks of the country fall into those extremes.

The imbalance is unhealthy at both ends of the spectrum. In one set of places, it produces congestion and unaffordability; on the other, blight and stagnation.

Which brings us back to Beth Steel. When it was riding high, so was its host city, Baltimore; in 1960, the city’s population was 939,000, the sixth largest in the country. By 1980, even after two decades of white flight, the city still boasted a population nearly 150,000 people larger than its neighbor 40 miles to the south, Washington. Baltimore had the region’s only baseball team, and hosted several major corporate headquarters, a superior symphony orchestra and three daily newspapers. 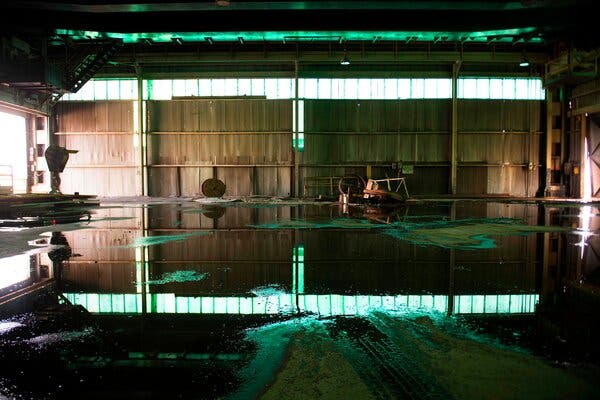 But by the second decade of this century, the two cities’ fortunes had radically diverged. Washington, D.C. was transformed by the boom in lobbying and homeland security spending, gentrification flipped neighborhoods, turning it into a city of trendy restaurants and high-end real estate that, by one estimate, displaced 20,000 African-American residents from 2000 to 2013. Its population had swelled from 570,000 in 2000 to more than 700,000. Baltimore’s slipped below 600,000. Metro Washington was now home to more than a dozen Fortune 500 companies. Baltimore, after a series of mergers and departures, had none.

By 2014, Baltimore leaders were so desperate for growth that they threw more than $43 million in state and local subsidies at Amazon to build its first warehouse in town, at the site of a former General Motors plant. The Sparrows Point Amazon warehouse followed in 2018, with more tax breaks.

The city then aimed even higher: In 2017, it made a lavish bid to be home to Amazon’s second headquarters, HQ2. It didn’t even make the 20 finalists. Notably, nor did other postindustrial cities that could desperately use a boost, including Cleveland, Detroit and St. Louis.

Among the cities that were still in the running for Amazon’s dangled plum was Washington. Amazon had already developed a conspicuous presence in the nation’s capital: It had vastly increased its lobbying presence there, it was doing major business in selling its cloud services to the federal government and homeland-security industrial complex, and Jeff Bezos had not only purchased the local newspaper, he also picked Washington’s largest private home, a $23 million mansion in the Kalorama neighborhood, to which he added $12 million in renovations.

In late 2018, I attended a gala dinner for Mr. Bezos at the Washington Hilton, hosted by the Economic Club, a regular gathering of the local power seçkine. I looked on as the club’s president, David M. Rubenstein, the co-founder of the private equity firm the Carlyle Group, joked onstage with Mr. Bezos. “You have become the wealthiest man in the world. Is that a title that you really wanted?” Mr. Rubenstein said.

“It was fine being the second-wealthiest person in the world,” Mr. Bezos answered, to audience laughter.

Two months later, Amazon announced that HQ2 would be Arlington, Va., just across the Potomac from Washington, with 25,000 employees and billions in investment. It was the ultimate example of the winner-take-all, rich-get-richer dynamic of today’s economy, in which growth and prosperity flow to the handful of cities that are home to the tech giants that control ever more of daily commerce.

For those curious about the potential uplift that Amazon could have provided elsewhere, the company issued a statement to a New York Times reporter in 2019, insisting, “Nowhere did Amazon say HQ2 was a project designed to help communities in need.”

A year later, I was back in Baltimore watching workers demolish rowhouses on the eastern edge of town. Some of the bricks were being salvaged by an organization called Details Deconstruction that cleaned them and, through a sister organization called Brick+Board, sold them for building projects, many of them down the road in Washington.

One day, I accompanied the Brick+Board’s director, Max Pollock, as he inspected the installation of thousands of his bricks in a condo complex called Chapman Stables, situated in a previously derelict and now bustling corner of Washington. The developers were using the bricks to cultivate a faux-historic aura to entice buyers who would be spending up to $1 million for an apartment.

Standing before a brick wall in one corridor, Mr. Pollock acknowledged that it was discomfiting to see the building blocks of Baltimore’s glory years now being used to conjure a fantasy of authenticity for Washington’s hyper-prosperous present. “I have mixed feelings about it,” he said. “The part of it that is a little ridiculous is all the marketing around it. ‘Chapman Stables.’ It’s sort of like it’s ready-made to be ridiculed.”

These were streets in East Baltimore that were evvel home to blocks after blocks of working- and middle-class families, white and Black, including many who worked at Beth Steel. For the better part of a century, those jobs, and those homes, had sustained a stable existence for countless families and undergirded economic vitality for the city as a whole.

Now, like Sparrows Point before it, that segment of Baltimore’s built landscape, and the history it represented, was slowly disappearing. And the dismantling of one town was being used to prop up another, with new residents — some of them likely arriving for high-paid jobs at Amazon’s HQ2 — blithely purchasing the facade of a false past.

Mr. Pollock knew that most everyone living in the complex would never guess that the bricks were from an entirely different city, just 40 miles up the road.

Alec MacGillis, a reporter for ProPublica, is the author of the forthcoming “Fulfillment: Winning and Losing in One-Click America.”