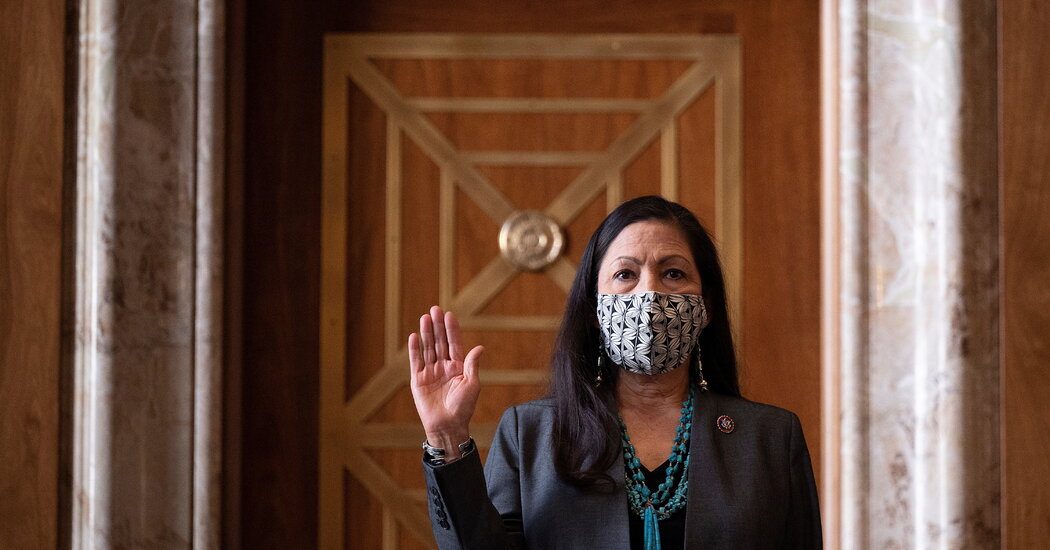 WASHINGTON — As the Interior Department awaits its new secretary, the agency is already moving to lock in key parts of President Biden’s environmental agenda, particularly on oil and gas restrictions, laying the groundwork to fulfill some of the administration’s most consequential climate change promises.

Representative Deb Haaland of New Mexico, Mr. Biden’s nominee to lead the department, faces a showdown vote in the Senate likely later this month, amid vocal Republican concern for her past positions against oil and gas drilling. But even without her, an agency that spent much of the past four years opening vast swaths of land to commercial exploitation has pulled an abrupt about-face.

The department has suspended lease sales in the Gulf of Mexico under an early executive order imposing a temporary freeze on new drilling leases on all public lands and waters and requiring a review of the leasing program. It has frozen drilling activity in the Arctic National Wildlife Refuge, delayed Trump-era rollbacks on protections of migratory birds and the northern spotted owl, and taken the first steps in restoring two national monuments in Utah and one off the Atlantic coast that Mr. Trump largely dismantled.

As early as this week, one administration official said the Interior Department is poised to take the next steps in preparing a review of the federal oil and gas leasing program.

Even critics of the administration’s agenda said they have been surprised by the pace of the agency’s actions.

That aggressiveness, along with Ms. Haaland’s long history of pushing to shut down fossil fuel drilling and pipelines, has put the agency in the line of fire from Republicans and the oil and gas industry.

“I almost feel like your nomination is sort of this proxy fight over the future of fossil fuels,” Senator Maria Cantwell, Democrat of Washington, told Ms. Haaland during her confirmation hearing last week. 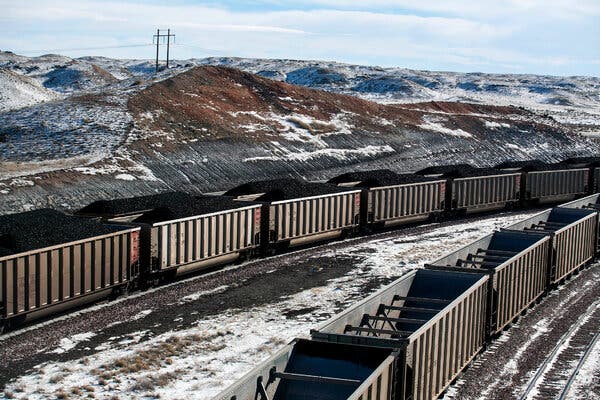 The Environmental Protection Agency will ultimately take center stage in the regulatory battles over climate change because it is the lead agency policing emissions from the electricity and transportation sectors — the two largest sources of greenhouse gas emissions in the United States.

But the Interior Department, which decides when and whether to sell publicly owned coal, oil and gas, is at the heart of the always contentious fight over keeping such resources “in the ground” — that is, whether the vast majority of America’s fossil fuels should remain untapped to avoid dangerous concentrations of greenhouse gases in the atmosphere.

Mr. Biden already has appointed nearly 50 top Interior officials across the vast agency, many of them veterans of the Obama administration, adept at pulling the levers of policy. They include Kate Kelly, who spent six years at the Interior Department before going to the liberal Center for American Progress where she focused on public lands policy, and Laura Daniel Davis who served as chief of staff to former secretaries Sally Jewell and Ken Salazar. This time around, she is a principal deputy assistant secretary over land and minerals management.

Perhaps the most significant driver of the agency’s most aggressive early action, supporters of the administration said, has been David Hayes, who served in both the Obama and Clinton administrations as deputy secretary of Interior. Mr. Hayes worked on Mr. Biden’s transition and ahead of Inauguration Day was tapped to be a special adviser to the president on climate change policy.

“These are people who know how to get things done,” said Sarah Greenberger, interim chief conservation officer at the National Audubon Society.

The appointments have had immediate effects. The day after Mr. Biden named a new offshore energy regulator at the Bureau of Ocean Energy Management, for example, the office revived the review of an offshore wind farm near Martha’s Vineyard that the Trump administration had moved to cancel.

Protections put in place to protect the sage grouse from becoming an endangered species have been at the heart of several conflicts over fossil fuel extraction on federal lands.Credit…Bob Wick/Bureau of Land Management

Ms. Greenberger noted that actions like suspending the Trump-era rule that gutted protections for migratory birds required particularly fast planning since the Biden administration had only a short window to act before the rule was set to take effect, on Feb. 8. Similarly when an Alaska Native group missed a deadline to conduct a seismic survey in the Arctic National Wildlife Refuge, the department moved to effectively kill the survey.

“There was an enormous amount of thought put in during the transition, especially into understanding what needed to happen and what were the opportunities,” Ms. Greenberg said.

“Makes you wonder if they’re treating the new secretary as a figurehead and the deputies are going forward with what they had planned regardless,” said Kathleen Sgamma, president of the Western Energy Alliance, a Denver-based oil and natural gas association.

In a statement Jennifer Van der Heide, chief of staff at the Department of Interior, said those already in place at the agency are working to implement Mr. Biden’s campaign promises until Ms. Haaland is confirmed.

“There are some actions we can or must move quickly on, but when we have a secretary, she will provide the leadership, experience and vision to restore morale within the department, build a clean energy economy, strengthen the nation-to-nation relationships with tribes, and inspire a movement to better conserve our nation’s lands, waters, and wildlife,” Ms. Van der Heide said.

The Interior Department manages about 500 million acres of public lands and vast coastal waters. Its agencies lease many of those acres for oil and gas drilling as well as wind and solar farms. It oversees the country’s national parks and wildlife refuges, protects threatened and endangered species, reclaims abandoned mine sites, oversees the government’s relationship with the nation’s 574 federally recognized tribes, and provides scientific veri about the effects of climate change.

That sprawling range of authorities has allowed Interior to move more quickly than smaller agencies that rely more on the slow churn of regulations, experts noted. Interior has initiated consultations with tribal leaders to hear their suggestions on federal policies and reversed restrictions that Mr. Trump’s Interior secretary, David Bernhardt, had imposed on the Land and Water Conservation Fund, which prevented money from being used to buy public land.

But some major actions — such as an expected revision of the Endangered Species Act, which Mr. Trump’s administration curtailed through regulation — must await a Senate-confirmed secretary.

Mr. Biden’s Interior Department will ultimately be defined by its reversals on fossil fuels after four years in which the Trump administration aggressively pursued energy production on public lands.

At Ms. Haaland’s confirmation hearing Senator John Barrasso, Republican of Wyoming, noted that she has advocated for keeping fossil fuels “in the ground.” He pressed her on where oil and gas workers in his state and others that depend on drilling will work if Mr. Biden’s drilling pause becomes permanent.

Ms. Haaland sought to reassure Republicans that she would enact Mr. Biden’s policies of pausing future fracking, not banning it. In fact, Mr. Biden’s position is not far from Ms. Haaland’s. He campaigned on a promise of “banning new oil and gas permitting on public lands and waters,” and it remains unclear for now whether the Biden administration will move forward with a permanent moratorium.

Ms. Sgamma, whose group has filed a lawsuit challenging Mr. Biden’s executive order, said she believes the administration’s review of the leasing program is actually designed to drag on for the duration of Mr. Biden’s term.

“In the meantime, we will expect no leasing and a slowdown in other permitted activity. That’s why this is not a pause’ on leasing,” she said, adding, “Whether you call it a ‘pause’ or a yearslong ban, it is unlawful and I like our chances in court.”

Drew Caputo, vice president of litigation at EarthJustice, an environmental group, said he hopes the early pause will be a down payment on Mr. Biden’s campaign pledge.

“The climate crisis and the biodiversity crisis isn’t standing still,” he said.