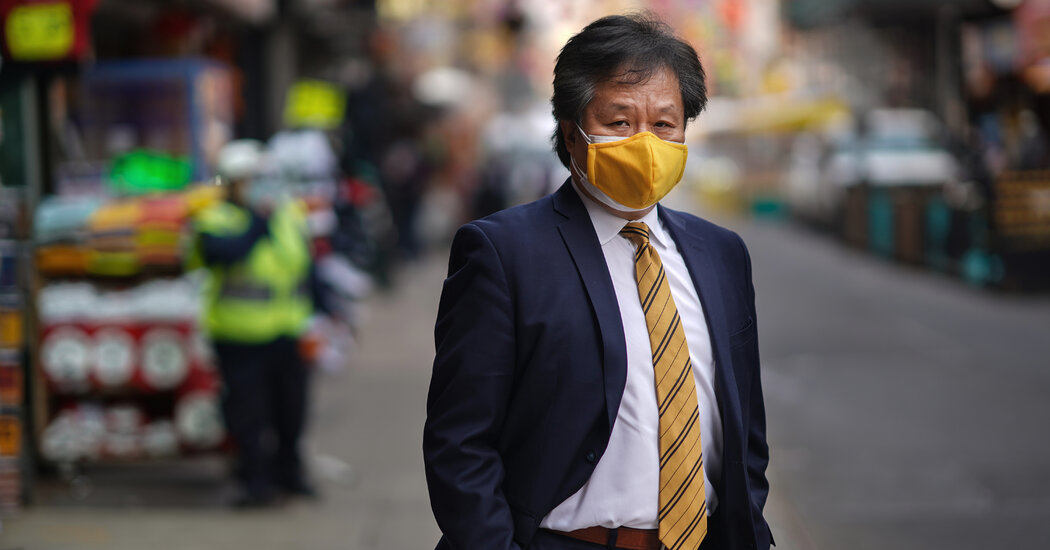 On a cold evening last month, a Chinese man was walking home near Manhattan’s Chinatown neighborhood when a stranger suddenly ran up behind him and plunged a knife into his back.

For many Asian-Americans, the stabbing was horrifying, but not surprising. It was widely seen as just the latest example of racially targeted violence against Asians during the pandemic.

But the perpetrator, a 23-year-old man from Yemen, had not said a word to the victim before the attack, investigators said. Prosecutors determined they lacked enough evidence to prove a racist motive. The attacker was charged with attempted murder, but not as a hate crime.

The announcement outraged Asian-American leaders in New York City. Many of them protested outside the Manhattan district attorney’s office, demanding that the stabbing be prosecuted as a hate crime. They were tired of what they saw as racist assaults being overlooked by the authorities.

“Let’s call it what it is,” said Don Lee, a community activist who spoke at the rally. “These are not random attacks. We’re asking for recognition that these crimes are happening.”

The rally reflected the tortured public conversation over how to confront a rise in reports of violence against Asian-Americans, who have felt increasingly vulnerable with each new attack. Many incidents have either not led to arrests or have not been charged as hate crimes, making it difficult to capture with reliable veri the extent to which Asian-Americans are being targeted.

That frustration erupted on a national scale this week after Robert Aaron Long, a white man, was charged with fatally shooting eight people, including six women of Asian descent, at spas in the Atlanta area on Tuesday night.

Investigators said it was too early to determine a motive. After Mr. Long’s arrest, he denied harboring a racial bias and told officials that he carried out the shootings as a form of vengeance for his “sexual addiction.”

The Atlanta shootings and other recent attacks have exposed difficult questions involved in proving a racist motive. Did the assaults just happen to involve Asian victims? Or did the attackers purposely single out Asians in an unspoken way that can never be presented as evidence in court?

Many Asian-Americans have been left wondering how much cultural stereotypes that cast them — especially women — as weak or submissive targets played a role. 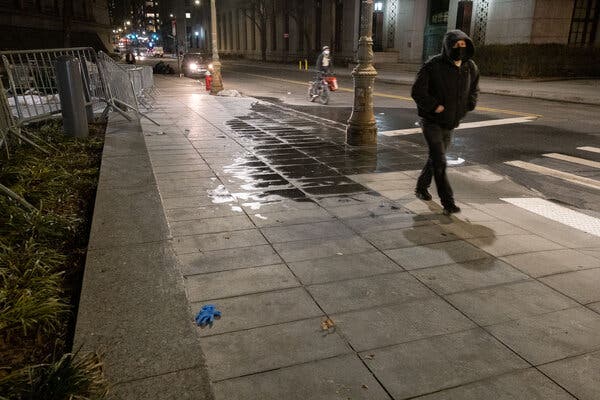 A surgical glove lies near the spot where a Chinese man was stabbed in Manhattan’s Chinatown last month.Credit…Dakota Santiago for The New York Times

Other incidents that clearly seemed racially motivated have not resulted in arrests. The police are still searching for a man who called an Asian-American mother the “Chinese virus” and spat at her child in Queens last week.

As the debate over what legally qualifies as anti-Asian bias unfolds, the community is grappling with the reality that the law is simply not designed to account for many of the ways in which Asian-Americans experience racism.

In New York State, to charge such attacks as hate crimes, prosecutors would need to show that the victims were targeted because of their race.

But proving a racist motive can be particularly difficult with attacks against Asians, experts say. There is no widely recognized symbol of anti-Asian hate comparable to a noose or a swastika. Historically, many Asian crime victims around the country were small-business owners who were robbed, complicating the question of motive.

Asian-Americans are sharply divided over the best measures to curb the violence, reflecting the wide ideological and generational differences within a group that encompasses dozens of ethnicities. There are about 1.2 million Asians in New York City, according to census veri, making up 14 percent of the city’s population.

Some have called for lowering the bar to bring hate-crime charges, toughening penalties and boosting funding for the New York Police Department to investigate attacks against Asians.

Others have opposed these proposals, saying more policing could harm their own communities, worsen racial tensions and disproportionately target the Black and Latino communities that have long dealt with aggressive policing.

Among large American cities, New York City had the largest increase in reported hate crimes against Asians last year, according to an analysis of police veri by a center at the California State University, San Bernardino. There were 28 such incidents in 2020, up from 3 in 2019, according to New York Police Department veri.

In the past month alone, several assaults on Asian victims have been reported to the police, including an attack on an older woman who was pushed outside a bakery in Queens. None of the incidents has been charged as a hate crime.

In fact, the only person who has been prosecuted for an anti-Asian hate crime in New York City this year is Taiwanese. He was accused of writing anti-Chinese graffiti outside several businesses in Queens.

The authorities acknowledge that the veri is limited and imperfect. A pending bill that is expected to pass by June would set up a more standardized system for New York’s courts, police and prosecutors to report hate crime incidents.

Stewart Loo, a deputy inspector who heads the Police Department’s Asian Hate Crimes Task Force, said in an interview that Asian-Americans are often reluctant to report crime because of language barriers or worries over having their immigration status questioned. Many also fear retaliation from perpetrators, he said, or simply do not want to make trouble.

Deputy Inspector Stewart Loo, who leads the Asian Hate Crimes Task Force, spoke at a press conference in Queens to call attention to recent attacks on Asian-Americans.Credit…Andrew Seng for The New York Times

Last year, the attacks in New York City that did get prosecuted as hate crimes typically involved people blaming Asians for spreading the coronavirus, echoing the rhetoric of former President Donald J. Trump, who has referred to the disease as the “China virus” and the “Kung Flu.”

For instance, a white woman was charged with a hate crime last March after she bumped into an Asian woman crossing the street in Manhattan and said, “You’re the reason why the coronavirus is here,” before spitting on her and pulling out some of her hair, according to prosecutors.

In the Chinatown stabbing last month, prosecutors said there was no evidence that the defendant, Salman Muflehi, targeted the victim because he was Asian or saw the victim’s face before stabbing him. Mr. Muflehi did tell the police afterward that he did not like the way the victim had looked at him.

Mr. Muflehi immigrated from Yemen to New York as a teenager. He has suffered from severe mental health issues for years, often getting into fights and landing in jail, according to interviews with his brother and mother. They say he has never expressed any hatred against Asians.

Salman Muflehi was accused of attempted murder in the stabbing of a man in Chinatown.

He has previously been arrested on accusations that he assaulted both his brother and his father. Most recently, he was charged in January with punching a Hispanic man in the head, prosecutors said. (Prior news reports incorrectly identified that victim as Asian.)

Mr. Muflehi remains in jail. He faces four criminal charges, including attempted murder. Adding a hate crime designation to the charge would raise the asgarî sentence he faces from five years to eight years.

The 36-year-old victim, whose identity has not been made public, was hospitalized for more than two weeks. He was released on Sunday.

Police investigators recommended the stabbing be charged as a hate crime, but the Manhattan district attorney’s office disagreed.

Shirley Ng, a community organizer in Manhattan’s Chinatown, supports easing the criteria for hate crime charges and eliminating bail for them, because, in her view, officials have been too lenient in cases involving Asian victims.

“It’s too easy to say these suspects have mental illness,” Ms. Ng said. “Sometimes they are also cognizant that they’re out to hurt people.”

Wayne Ho, president of the Chinese-American Planning Council, a social services agency, said many of his Asian colleagues were verbally harassed during the pandemic but chose not to alert law enforcement because they worried the perpetrators, who were often people of color, could be mistreated by the police.

“I asked myself, do I want this person in jail?” said Alice Wong, one of Mr. Ho’s colleagues. “Just because you put someone in jail doesn’t make them not hate anyone anymore.”

Recognizing this challenge, some law enforcement officials have called for people who commit hate crimes to attend antiracism classes as an alternative to prison.

The approach was used after four teenage girls last March assaulted a 52-year-old Asian woman on a bus in the Bronx while accusing her of spreading the coronavirus, according to prosecutors. One of the girls beat her with an umbrella.

With the consent of the victim, prosecutors allowed three of the girls to be cleared of criminal charges if they participated in an educational program on hate crimes for two months. Their identities have not been made public because they are minors.

Elizabeth OuYang, a civil rights lawyer who supervised the program, said the program helped debunk stereotypes for the girls, who are Black and grew up without much interaction with Asian-Americans. By the end, Ms. OuYang felt confident that they were remorseful about what they had done.

“The girls are good kids,” Ms. OuYang said. “They’re not evil monsters. I swear on my mother’s grave they will not commit another hate crime again.”