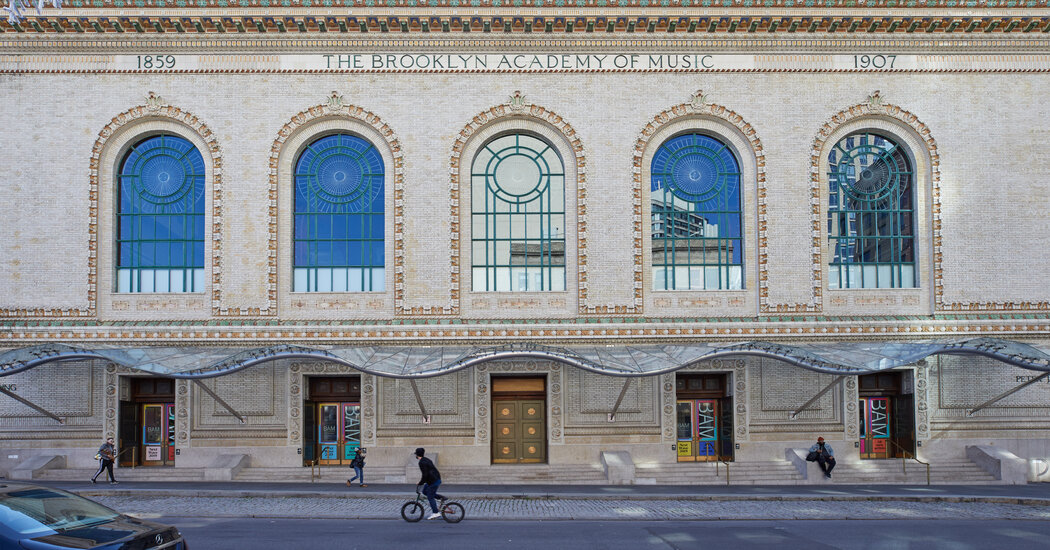 One of the perks of leading premier cultural institutions, besides the substantial salaries, is the use of elegant apartments, which are often owned by arts organizations and passed from one top executive to the next.

But the Brooklyn Academy of Music took it a step further in 2015 when Katy Clark became its president. The organization gave its new leader nearly half the purchase price of a $1.9 million, three-bedroom prewar home overlooking Prospect Park that she could call her own.

Now, after just five years in the post, Clark left BAM in January for a lower-profile job at a foundation — and the apartment has gone with her, leading to questions about the fiscal prudence of such an outlay to lure a leader whose tenure wound up being much shorter than her predecessor’s.

The questions arise at a moment when the academy has lost millions of dollars in revenue because of the pandemic, which forced it to cease live programming, lay off or furlough staff members and taban into its endowment. For some staff members, the apartment bonus is emblematic of an institution that has prioritized expansion and executive hisse over the well-being of its lower-level employees.

“To be in an all-staff meeting where we were hearing so much about capital projects and how grateful Katy was to be able to walk to work was very disheartening,” said Nora Tjossem, BAM’s former education coordinator, who left in 2018. “It made a lot of us question the austerity we saw in other parts of the institution.”

Michael M. Kaiser, chairman of the DeVos Institute of Arts Management at the University of Maryland, called the apartment arrangement unorthodox.

“While there are instances where a board will loan an executive funds to purchase a home when they must move to a new city, it is highly unusual for these funds to be a signing bonus that the executive is allowed to keep,” he said. “It is a lovely gesture to welcome a new leader so generously but it may send signals to donors that the organization has resources to spare.” 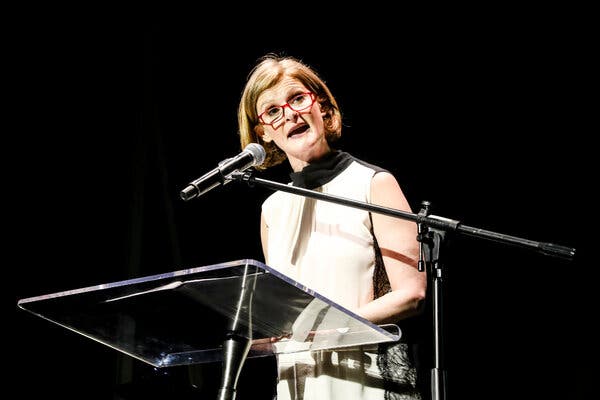 Katy Clark served as president of the academy from 2015 until earlier this year.Credit…Krista Schlueter for The New York Times ORG XMIT: NPX

Nora Ann Wallace, who became the chairwoman of BAM’s board in November, defended the organization’s decision to help Clark with her apartment purchase.

She said that when Clark was hired from the Orchestra of St. Luke’s — a smaller organization where she had successfully led a $50 million campaign to build its new DiMenna Center — it did so on the condition that she move to Brooklyn to be close to BAM.

At the time, Clark lived with her husband and two children in an apartment on West 181st Street in Washington Heights in Manhattan. She ended up selling that apartment for $635,000 and purchased the apartment on Prospect Park West in December 2015.

“Given that real estate prices were so much higher at the time in Brooklyn than in the neighborhood where she owned an apartment,” Wallace said in an email interview, “we agreed to provide a housing bonus to enable her to sell her apartment and buy a comparable apartment in Brooklyn.”

Many arts organizations retain ownership of the properties that they make available for their top executives. Thomas P. Campbell had to move out of the Metropolitan Museum of Art’s $4 million co-op Fifth Avenue apartment when he resigned as the director of the museum; Ellen V. Futter, president of the American Museum of Natural History, lives rent free in a $5 million East Side apartment that the museum bought when she started; Glenn D. Lowry, the Museum of Çağdaş Art’s director, lives in a $6 million condo owned by the museum.

LACMA’s director, Michael Govan, was given use of this museum-owned property, valued at $2.4 million, during part of the pandemic. To save the museum money, he later moved to a home that he owns and the museum is looking to sell the property. Credit…Carolina Miranda/Los Angeles Times, via Getty Images

While BAM had considered buying an apartment for the use of whoever was serving as president, Wallace said the organization “concluded that it was not a prudent use of BAM’s funds to speculate in Brooklyn real estate, especially residential real estate that may be suitable for one president and his or her family but not for the next.”

Wallace said that the housing bonus was “the equivalent of additional compensation over five years,” since the employment agreement stipulated that Clark would refund a portion of it “if she did not stay in the job at BAM for a full five years.” She said that the board had unanimously approved Clark’s hisse package and housing bonus after determining that it was reasonable, and in line with comparable institutions.

Born and raised in Wales, Clark had played violin in the BBC Symphony Orchestra in London, earned a master’s degree in violin performance at the University of Illinois at Urbana-Champaign and holds a certificate in arts management at Birkbeck College, University of London. But with a $7 million budget, St. Luke’s was a much smaller institution than BAM.

Wallace said it was Clark’s decision to leave this year and praised her for recruiting strong executives and trustees, raising significant funds and leading BAM “into its exciting next chapter.”

Clark’s starting salary was less than what Karen Brooks Hopkins, her predecessor made in total compensation for her last full year, $433,000. But Hopkins had served for 16 years as president — and a total of 36 years at BAM — and received no housing allowance.

Clark, in an email, did not respond to questions about the apartment. Instead, she described her accomplishments at BAM — which included overseeing the institution’s continued expansion and implementing its diversity, equity and inclusion plan — and reiterated the statement she had issued when she announced her departure: “I have truly loved the multidimensional challenges of my work at BAM these past five years, and I wish the organization the best as it charts a path forward in these very challenging times.”

Clark is now executive director at the Emily Davie and Joseph S. Kornfeld Foundation, which supports bioethics, palliative deva, medical research and education; her salary has yet to be disclosed.

BAM, like many other cultural institutions, has struggled through the pandemic since live performance, the organization’s lifeblood, has been nonexistent. The shutdown complicated an already-difficult moment of transition for the institution, which built an international reputation as an incubator of the avant-garde under longtime artistic and administrative leaders like Harvey Lichtenstein, Joseph V. Melillo and Hopkins.

BAM cut its annual operating budget 40 percent, to about $30 million from about $50 million. The academy laid off 25 employees and furloughed 80, 40 of whom have been since been rehired, Wallace said. Others took voluntary buyouts. The BAM Endowment Trust, which holds what Wallace said is the institution’s $100 million endowment, approved a special distribution to BAM of $5 million in the fiscal year that ended in June and has authorized an additional $3 million for the next fiscal year.

Clark’s departure compounded the sense of a leadership vacuum at BAM, coming after the death last summer of its hands-on chairman, Adam Max.

This week the board of directors announced an internal team to lead the institution temporarily, while it searches for Clark’s successor: Jennifer Anglade, its chief financial officer; Coco Killingsworth, the vice president for creative social impact; and Elizabeth Moreau, an associate vice president.

BAM’s new artistic director, David Binder, a former Broadway producer, has only been in the post since 2019; some staff members complain that since the pandemic darkened their theaters, the academy has not moved as aggressively into online programming as some of its peers.

Kaitlyn Chandler, a görüntü editor and motion designer at BAM, who recently helped organize an administrative union there, said that many employees felt there had been a “lack of initiative” during the coronavirus crisis. “Staff morale is at rock bottom,” Chandler said. “It doesn’t feel like we’re really doing anything.”

Binder said in an email that the academy would next week announce its spring programming, which will include outdoor and virtual events. “Throughout this, me and my team have stayed committed to serving artists, offering residencies and commissions to support the development of their work during the pandemic and beyond,” Binder said in the email. “I’m very fortunate and proud to be part of such a dedicated team here at BAM.”

Wallace praised Binder’s programming and online programs, such as the play by V (formerly Konuta Ensler) “That Kindness: Nurses in Their Own Words,” the public arka installation “Let Freedom Ring,” the dance piece “Draw From Within” and Riz Ahmed’s “The Long Goodbye.”

Tom Finkelpearl, New York City’s former cultural affairs commissioner, said he was confident that BAM would bounce back. “These are exceptionally tough times across the board for performing arts organizations with the sudden loss of all earned income,” Finkelpearl said. “These difficulties are compounded at BAM with the loss of board and executive leadership, but BAM will survive.”

Wallace said that BAM had been “remarkably active” during the pandemic, and that she was confident in the new interim leaders. “We expect they will strengthen management across all areas of BAM,” she said, “and provide a solid foundation for BAM’s next president, for whom a search is underway.”