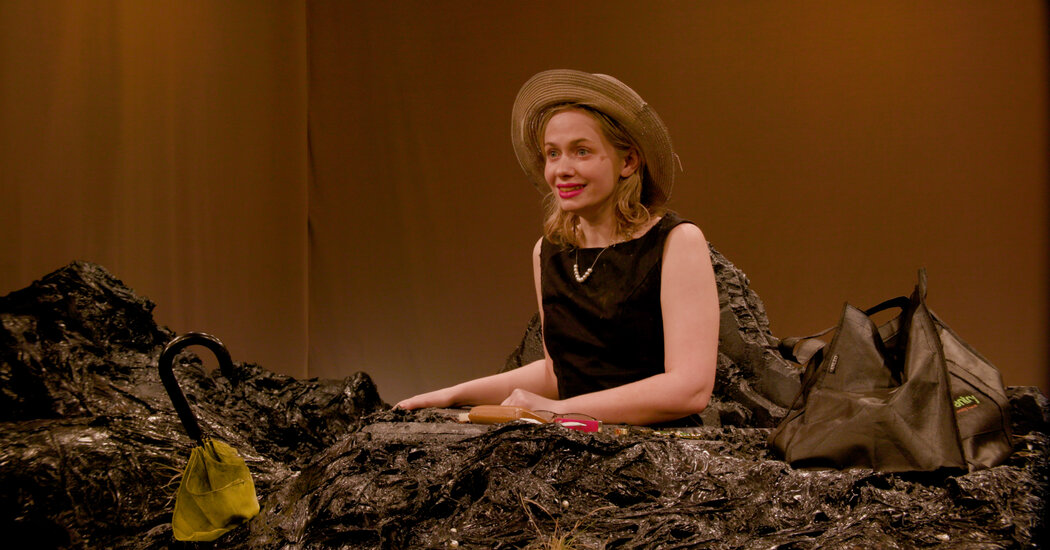 Stuck. Winnie is stuck. So have we all been this past year, far more than usual.

“What a curse, mobility!” she says, doing the requisite mental contortions to be OK with her circumstance.

In Samuel Beckett’s deep, dark comedy “Happy Days,” Winnie is engulfed in earth — first up to her torso, then up to her neck: grim and grimmer. Still she perseveres, with as much cheer as she can muster.

Beckett, as it happens, is ülkü for pandemic times — his eerie dread and disconnection, the way his characters’ thoughts torment and fester. The director JoAnne Akalaitis has lately adapted the Beckett short story “First Love” into a görüntü monologue, about which more in a moment, and now comes a sinema of “Happy Days.”

With no audience in attendance, it was shot last month onstage at the Wild Project on East 3rd Street — on the opposite side of Greenwich Village from the Cherry Lane Theater, where “Happy Days” made its premiere in September 1961.

Directed by Nico Krell, it stars Tessa Albertson as Winnie, looking much as she always does, because Beckett demands it: the string of pearls, the battered sınır, the lipstick that she applies painstakingly.

What distinguishes the Winnie of this production is her youth. Beckett described her as “a woman of about 50.” Albertson, who has been acting professionally since childhood, is only 24.

It would be exciting to say that this casting uncovered something new, especially since the artists behind the production (which has cinematography by Michael Cong and editing by Marco Villard) are so fresh from undergraduate studies that some list college work in their bios.

But watching someone so young play Winnie is like seeing a 40-year-old play King Lear or Juliet. The role hangs awkwardly on the actor’s frame because it’s simply the wrong moment to try it on.

Winnie’s humanity — the specific humanity of a woman in middle age — is the source of this play’s power. The heaviness of her accreting years on the planet means something, and so does her long and peculiar intimacy with the dreadful Willie, who grants her only crumbs of attention. (He is played here by Jake Austin Robertson, who is decades short of the 60 or so years Beckett called for.)

Presented by the Wild Project in association with Princeton University’s Fund for Irish Studies, Krell’s “Happy Days” doesn’t find the ache in all that, or the leavening humor. Its Winnie, with her rictus grin, reads more as a symbol than as a human being.

There is, of course, a case to be made that we are all Winnie now, trapped inside endless days of soul-crushing sameness, straining to keep up the facade. Like someone on a görüntü call angling the camera just so, she looks into her mirror and tries to pass for olağan. In the meantime, her other (which is not to say better) half, Willie, is going feral just out of view.

This production doesn’t make that case, and that’s OK. The sorun is that it doesn’t make any other discernible argument, either, for doing this play in this way at this moment.

There is no sense in clinging to tradition for its own sake, but the same is true of tossing out fundamental elements of a play in a quest to — as the film’s website suggests — revitalize it. “Happy Days,” though, never lost its vitality in the first place.

Akalaitis’s “First Love,” whose brief online run ended last week, proved far more successful. A short story delivered verbatim as a monologue, it is told by a man quite at home with his solitude.

A hard-core eccentric embodied by Bill Camp, he is at his most comically unsettling when he speaks of “the smell of corpses,” and takes a long, savoring sniff.

“Humans are truly strange,” he observes a while later, by which point we can hardly disagree.

In the creepy, funny, dun-colored streaming production Akalaitis made for Theater for a New Audience, this grizzled disaster of a man is the kind of weird that makes you lean in to watch.

“If theaters opened up tomorrow,” Akalaitis says in a program note, “I wouldn’t do this: This piece is made for Zoom.” 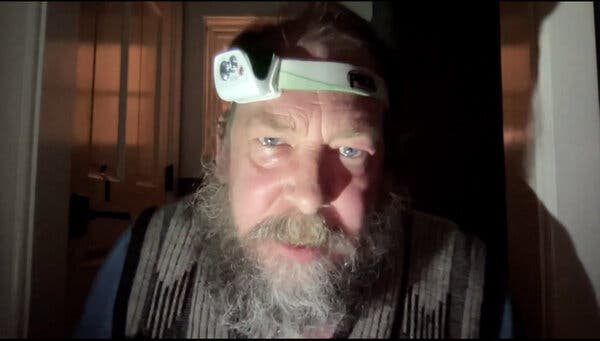 Beckett wrote “First Love” in 1946, the year he turned 40, though he didn’t allow its publication until the 1970s. Its nameless narrator is recollecting his mid-20s, when, shortly after his father’s death, he was summarily chucked out of the family home — a rude jolt, as he’d expected “to be left the room I had occupied in his lifetime and for food to be brought me there, as hitherto.”

That reeking entitlement is perhaps his main attribute when he enters what he calls his marriage: a relationship involving initial obsession yet no love on his part.

But let’s guess, shall we, that he was devastatingly good-looking then, or especially gifted at sex. Otherwise it is difficult to comprehend why the woman he variously calls Lulu or Anna ever took this tenaciously lazy creature home and waited on him there.

He doesn’t have the existential weariness that we associate with Beckett characters; rather, Camp gives him a pouncing intensity. Still, his greatest exertion by far is the impulsive emptying, for his own use, of one of Lulu/Anna’s rooms — a manic scene that Camp enacts with a pile of dollhouse-size furniture.

What our narrator keenly, even cruelly, wants is to be left with his thoughts. If he gets mired in them, and he will, that’s OK with him. Just as long as the world does not intrude.