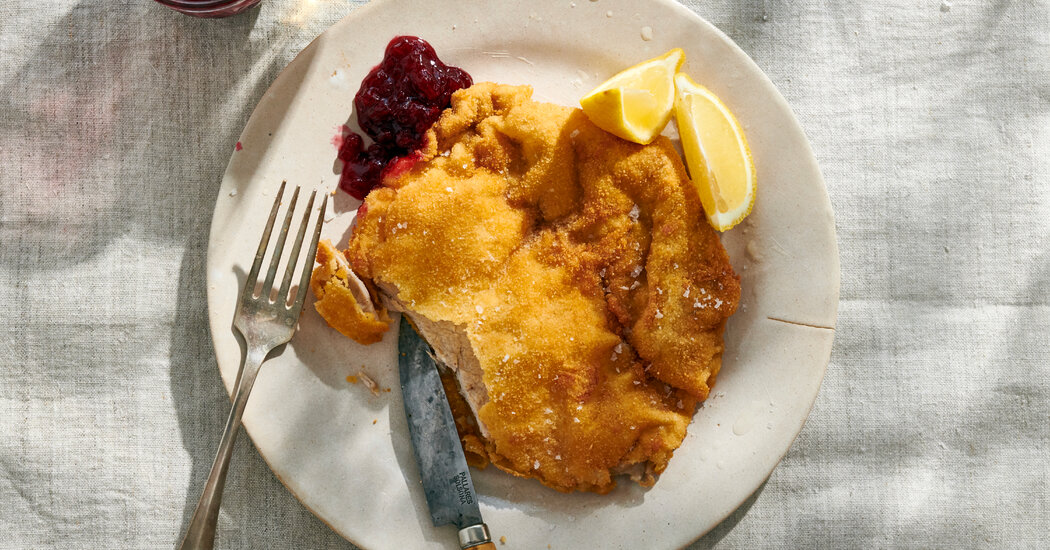 SEATTLE — It’s 1 a.m., and I’m standing at the stove, swirling my wok and watching waves of melted lard pass over a pork cutlet that is verging on the perfect shade of gold.

Jamón, my shar-pei and the primary taste-tester for this particular recipe, looks up at me, and I note the satisfying similarity between his thick, ribbonlike folds and the gentle waves of crust on my cutlet.

I retrieve the cutlet from the hot fat and transfer it to a plate lined with paper towels, gently blotting oil from its surface, and pause for a moment to respond to my wife, Adri, who’s texting me from bed to ask when I’ll be finished. Even with full ventilation, the smells of my late-night frying marathons have been enough to keep her up at night. 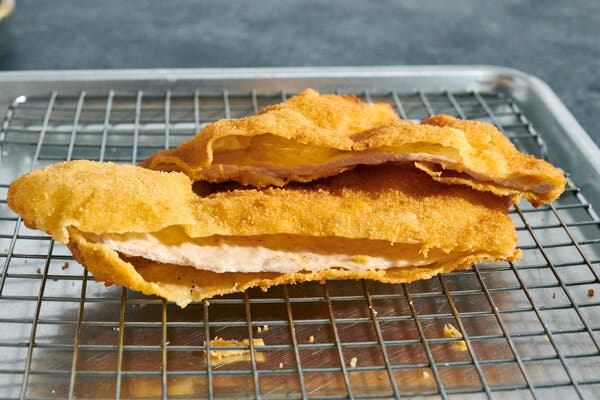 The magic of Viennese schnitzel is in the way the cook coaxes the crust to puff away from the meat, a process known as soufflieren in German.Credit…David Malosh for The New York Times. Food Stylist: Simon Andrews.

I scrape the crust with the back of my knife and note its satisfying rasp, then cut it open. Steam wafts out, and the thin cutlet glistens with juiciness in its golden cave. Jamón taps his paws impatiently. “This is the one,” I think. “Perfect schnitzel.”

I should back up for a moment and explain exactly what I mean by “perfect” schnitzel, as it’s hardly a black-and-white subject.

Most breaded-and-fried cutlets of the world — Italian cotoletta alla Milanese, Japanese tonkatsu, Colombian chuleta valluna, even American Shake ‘N Bake — feature a crust that is bound to the meat. Even in Bavaria and central Austria, where I traveled before developing the opening menu for my beer hall in California, this is how most schnitzel was served.

But arguably the most celebrated breaded cutlet in the world comes from Vienna. The Wiener schnitzel has its own sort of geometry, one that’s hard to understand until you’ve tried it.

For me, that came in 2013, at Harold Dieterle’s West Village restaurant the Marrow (which closed in 2014), where thinly pounded duck breast came almost floating in a puffed crust. The magic of Viennese schnitzel is in the way the cook coaxes the crust to puff away from the meat, a process known as soufflieren in German. The meat, well insulated by the layer of air between it and the violently hot fat, cooks gently, while the crust achieves an ethereally delicate crispness, rich in flavor but light on the palate.

So what are the elements that go into making a Viennese-style schnitzel? Or, conversely, a schnitzel in which meat and crust stick together and offer a meatier, crunchier bite?

Nearly every recipe and chef I consulted followed a similar process: Veal cutlets are pounded very thin, then seasoned, dredged in flour, dipped in lightly beaten eggs, coated with finely ground bread crumbs and immediately transferred to hot fat. As the cutlet fries, steam released by the meat is trapped in the elastic, airtight seal formed by the eggs as they bind the bread crumbs and begin to set. If all goes well, the steam inflates the breading layer, which separates from the cutlet and puffs before it fully crisps.

So, meat, flour, eggs, bread crumbs, fat and fry: That was where I focused my testing.

For an airy crust, use more eggs than it seems you’ll need.Credit…David Malosh for The New York Times. Food Stylist:Simon Andrews.

Let’s start with the meat. While true Wiener schnitzel must be made with veal, plain schnitzel can be made with practically anything that can be pounded to a cutlet. Lean center-cut pork loin chops are an obvious choice: They’re inexpensive and very easy to pound into a thin, even layer. Smooth pounding is important; the success of a puffed crust was closely linked to it. This also means that if you prefer a crust that adheres more firmly to the meat, you can whack it with the back of a knife after pounding it to add texture, a technique the YouTuber Maangchi recommends for Korean-style breaded cutlets.

The eggs are where the first true differences of opinion start to form. Gabriel Frasca, who worked with Mario Lohninger in developing the schnitzel technique employed at Danube, David Bouley’s now-shuttered New York ode to Viennese cuisine, tells me that the eggs should be only lightly beaten. The YouTuber Kein Stress kochen, on the other hand, blends his eggs completely smooth. At Cook’s Illustrated, the editors Keith Dresser and Steve Dunn suggest whisking the eggs with some oil to inhibit egg proteins from binding too tightly and adding some elasticity, allowing the crust to puff without breaking. (A 1963 program on the Austrian public TV station Österreichischer Rundfunk suggests the same.)

While my testing confirmed that a touch of oil could slightly improve your odds of a successful puff, the real trick was to use more eggs than it seems you’ll need. Four to five beaten eggs for four cutlets leave you with more than half of the eggs left over, but if you use fewer, it becomes difficult to get even coverage. Excess eggs can be saved to scramble for breakfast the next morning. (Well-done, for added safety.)

The fineness of your crumbs is more important than the type of bread used. Large, irregular flakes like panko produce a porous crust that does not create an adequate seal for good puffing, but is a great choice if extra crunch is your goal. At Wursthall, we settled on grinding panko-style crumbs in a powerful food processor, then running them through a drum-shaped fine mesh sieve called a tamis. (Mr. Dieterle tells me they used a similar process at the Marrow.)

Back home, I tested a wide range of options, including canned crumbs, and even the kaiser rolls that Viennese chefs suggest. (They’re uncommon in Seattle, where I live, but a staple of the New York bodegas of my childhood. I had my mom ship me some.)

Here’s the good news: Just about any bread crumbs can produce great schnitzel as long as the bread it comes from is bone-dry, relatively lean, ground and sifted very finely.

Then there’s the matter of frying: Early on at Wursthall, we thought we could prebread our schnitzel. This immediately resulted in schnitzel that fried up with an uneven color and barely any puffing, as a result of the bread crumbs absorbing moisture from the egg layer as they sat together. It is imperative that schnitzel be breaded very gently — no pressing! — and that it happen the moment before it hits the oil.

And it had better be plenty of oil — enough for the schnitzel to really swim in. With insufficient oil, the schnitzel comes into direct contact with the bottom of the pan, which can cause uneven browning and inhibit puffing. The renowned Vienna restaurants Meissl & Schadn and Figlmüller fry their schnitzel in a straight-sided sauté pans with at least an inch and a half of hot fat, which sloshes perilously close to the rim as cooks expertly swirl the cutlet to create waves of fat that wash over it. At home, a deeper Dutch oven makes for a safer choice, or, better yet, a wide flat-bottomed wok, which prevents splatter and offers easy angles to flip and maneuver the schnitzel as it fries.

For the best flavor, that fat can be clarified butter (or better: browned, then clarified butter), but I am loath to clarify two pounds of butter for a single meal. Store-bought lard is a good option, but vegetable oils like peanut, canola or rice bran will also work. (At Danube, Mr. Frasca says cooks would add a half-ounce of butter to the hot oil toward the end of cooking for flavor.)

Everyone — and my testing — did come to this: The schnitzel must be swirled constantly as it cooks, which promotes rapid, even cooking, and encourages the crust to lift away from the meat. Still, my success rate seemed to hover around 75 percent, with the crust sometimes steadfastly refusing to puff, even when I followed the steps exactly.

The breakthrough came when Omid Mirshafiei commented on one of my many schnitzel-related posts on Instagram, asking if incorporating vodka would produce useful results.

Vodka’s alcohol content makes it more volatile than water — that is, it evaporates faster, and more violently. Because of this, replacing a portion of the liquid in a batter with vodka can lead to lighter results. The British chef Heston Blumenthal takes advantage of vodka in his fish and chips recipe, and I call for it in my tempura recipe. But how would I apply it to schnitzel, which doesn’t have a liquid batter?

I recalled another technique featured by Kein Stress kochen, who spritzes cutlets with a fine mist of water before breading them. This water creates extra steam, increasing the odds of a successful puff. (Conversely, if you want a crust to stick, blot the cutlet very thoroughly on paper towels before breading it.) By brushing my cutlets with vodka instead of water, this effect was amplified, producing by far the puffiest, most consistent schnitzel yet. (As the alcohol evaporates, it leaves no trace of booziness, but if you abstain, even a spritz of water or vinegar will significantly improve your puff.)

I urge you to try this lighter, puffier style of schnitzel at least evvel, if you’ve never had it. As Jamón can testify, there’s no such thing as a bad schnitzel, so you’ve got nothing to lose. (And besides, thanks to vodka, you’re almost guaranteed to get those crisp, light results the first time.)

If you were to ask Viennese sommeliers what to drink with schnitzel, chances are grüner veltliner would be the answer. The crisply breaded meat goes beautifully with the dry, herbal, peppery wine, particularly if you shower the schnitzel with lemon juice. I prefer Austrian riesling for the extra depth I find in the wine, but that’s just me. You could also drink a good dry riesling from anywhere else in the world, or you could branch out. Sauvignon blanc from the Loire Valley would be delicious. So would Champagne or other dry sparkling wines — don’t neglect sparkling rieslings. If you prefer a red, look for something fresh and lightly fruity. An inexpensive blaufränkisch would be kaç, if you want to stay in the Austrian vernacular. Otherwise, try a pinot noir on the delicate side. ERIC ASIMOV