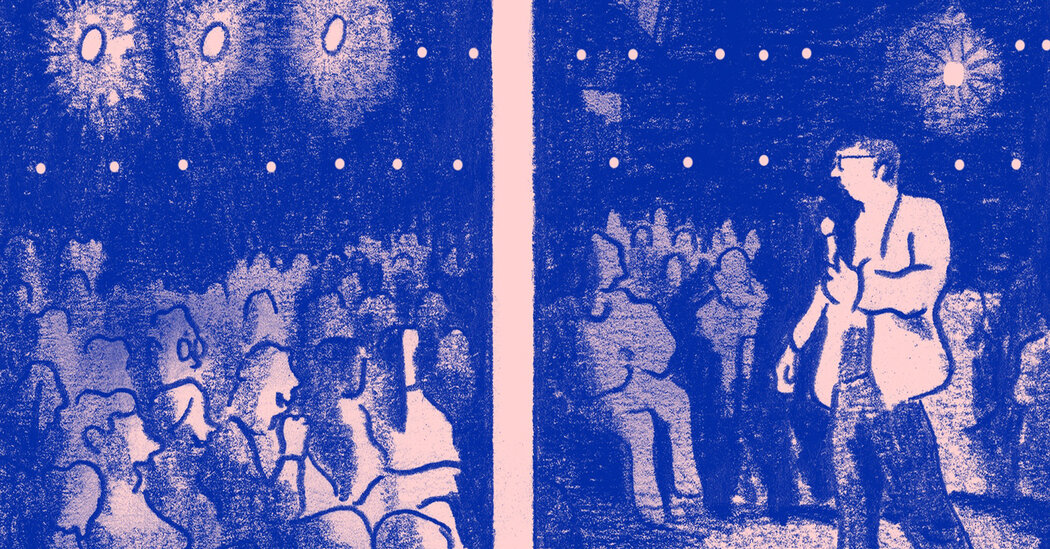 Last month, I walked through the lobby of a comedy club and started to make small talk with a neon jellyfish. This may sound like a trippy, pandemic-induced dream, but it’s actually the latest experiment in live entertainment online.

Using the new platform Bramble, the Brooklyn Comedy Collective recently started presenting shows that give audience members freedom to move through rooms in a virtual theater and mingle with other ticket-buyers before and after the performance. After choosing an avatar (I was a blue swan), you enter the theater and can talk to up to five people at a time whose faces emerge on the screen when you approach them. Walk away and they disappear. It’s as if a comedy club merged with a görüntü game. Whether it’s the future of comedy is unclear, but it definitely felt like an attempt to fill a desperate need of the present.

As we reach the anniversary of the shutdown, I badly miss live performances. But what has surprised me is that the loss I have felt most keenly is not that of seeing artists onstage, but of being in the audience.

For more than two decades as a critic of theater and comedy, visiting performance spaces most nights of the week, I spent more time as a member of an audience than as part of any other group with the exception of my immediate family. A year away has made me appreciate the pleasures of being a face in the crowd. Before, I barely even considered it, and to the extent I did, it was to be irritated (long lines, intrusive cellphones) or reflexively hostile.

In the popular imagination, individuals are typically the heroes. Put them in groups and they become villains — conformist, irrational, prone to violence.

Anxiety about crowds has an extensive history, dating back long before Covid-19 made groups of people seem reckless. A murderer’s row of thinkers (Plato, Nietzsche, Thoreau) insulted them, and an entire vocabulary (mob mentality, groupthink, the madness of crowds) telegraphs contempt.

But there are many kinds of crowds and an audience is a particularly structured genre with informal rules — when the lights go down, be quiet; at the end, applaud and leave. I mourn the loss of its minor rituals: the delight of eavesdropping on the row in front of you, the economical arka of the intermission conversation, the discreet discussion with a friend on the way out of the theater. But it’s an uncomfortable fact that one of the greatest appeals of being part of an audience is the flip side of that mindless suggestibility. Being swept up in the chaotic, unhinged spirit of raucous patrons can be, among other things, spectacular fun, singularly joyful and even perhaps necessary for mental health.

THERE’S SOMETHING SEDUCTIVE about being part of a crowd that is getting seduced. Sometimes, you can hear the epiphanic moment — the deafening roar after an acrobatic feat by Cirque du Soleil or the gasps in response to a trick by a magician. Then there’s the exciting silence of shock, as when a performer like Hannah Gadsby or Billy the Mime pivots from light comedy to startlingly dark revelation or when a Jeremy O. Harris plot twist catches you by surprise. Evvel a performer has us on their side, we will go along with nearly anything.

Sometimes, it happens before the show begins. Two decades later, I still vividly recall the buzzing, drunkenly anticipatory energy of opening night of the Broadway blockbuster “The Producers,” the most electric audience that I have ever been a part of. The musical was very good, but even if it wasn’t, the cultlike atmosphere made the prospect of failure seem impossible.

Crowd fervor can be alienating, even disturbing. Anyone who believes in the wisdom of crowds has never seen Jeff Foxworthy do comedy in an arena. But if losing yourself to the sentiments of an audience is a kind of madness, it’s a temporary insanity, one that is usually benign and that can also offer a necessary respite. There is not only strength in numbers, but a certain amount of anonymity as well, which can permit you to express yourself emotionally in ways that you otherwise never would. There are few better ways to escape the repression of your daily life than in an audience.

While I quietly wept last year in my apartment as I watched a görüntü of Brian Dennehy’s titanic performance in “Death of a Salesman,” I loudly sobbed and shook seeing the same show in a theater. It embarrasses me to confess that I cried more at that show than I have from any sad moment from my life. That’s not because I felt the fiction more. The crowd gives a kind of permission that the rest of life does not.

Just look at sports. Fans have been known to shout at the television set, but they don’t paint their faces or riot at home. The Dionysian parties on the streets when a city’s team wins the Muhteşem Bowl are now tradition. On New Year’s Meskene, we don’t just watch the ball drop on television. We gawk at the masses of people packed into Times Square.

On a much smaller scale, something similar is happening at the Brooklyn Museum, which is showing the French artist JR’s “The Chronicles of New York City,” a series of massive, highly manipulated photos of dynamic city streets crammed with people. Upon close inspection, it becomes clear these collagelike images were actually built from shots of individual strangers reconfigured into a sprawling crowd. Even though it was made before the pandemic, it’s perfect arka for the socially distanced era, a stunningly hypnotic simulacrum of the human density that has always been part of the genius of New York.

In the past year, many have described the impossible tragedy of being unable to mourn the death of a loved one with family and friends. Zoom cannot truly replace a public funeral, and losing a place to gather and grieve has a cost. But what about the price of losing opportunities to gather and express joy?

In her superb book “Dancing in the Streets: A History of Collective Joy,” Barbara Ehrenreich makes the case for the primal roots of such expressions, which she traces across millenniums,starting in the prehistoric era. People have joined festive crowds across time and culture, whether it be for ritualized dance, a political rally or an artistic event. “The capacity for collective joy is encoded into us almost as deeply as the capacity for the erotic love of one human for another,” she writes. “We can live without it, as most of us do, but only at the risk of succumbing to the solitary nightmare of depression.”

We are already seeing a surge in the numbers of people who have reported feeling anxiety and depression since the pandemic began. Even as vaccines are distributed and the country begins loosening rules on indoor activities, there is some question of whether everyone will feel comfortable congregating again. Caution is obviously warranted. The fun of a crowd is not worth a superspreader event.

But when the threat recedes, I believe people will return in overwhelming numbers. That’s because I have attended many online shows and seen the need for connection on the faces of the audience. It’s notable that comics who specialize in crowd work like Judah Friedlander and Todd Barry have been particularly active and successful online during the past year. In turning conversations with strangers into jokes, they are not only reminding people of something missing from many lives, they are also putting the audience in the central position, making the community aspect of comedy more explicit. The wide smiles and bursts of laughter in response, even from some who are being ribbed, suggest an appetite for this right now.

The relationship between the audience and comedy is peculiarly intense. In the pro-basketball bubble in Orlando, Fla., where games were played without fans, the N.B.A. still looked familiar if a bit uncanny. But take the audience away from clubs and comedy transforms into something else. Laughter is not just a response to a show. It’s the soundtrack as well as the glue that connects you to strangers. When a comic kills so triumphantly it leaves you in spasms, you literally shrink the distance between yourself and your neighbor, teetering closer.

Being part of a chorus of laughter lets you surrender to something larger. For many secular types like myself, it’s as close to churchgoing as you can get. When most live comedy stopped, we increasingly looked to our screens and found an imitation with an ineffable something missing.

LET’S BE FAIR. The digital comedy show produced by the Brooklyn Comedy Collective didn’t capture what an actual one feels like, but it provided some compensatory pleasures. After a few lackluster to mediocre sets, I lingered in the lobby with the jellyfish, my friend Ada, my most faithful human companion at shows before the pandemic. We chatted with a friendly lawyer from Toronto and talked trash about one of the jokes when we saw an avatar of a performer from the show walk nearby and immediately changed the subject. Ada said something polite as he passed. Afterward, I laughed and cringed a bit. It was the kind of awkward social interaction I hadn’t had in a long time. Felt good.

But a year of live online entertainment has never really captured one key element: Focus. There is an intensity of attention in a crowd, fully engaged and sharing a space, that is absent in looking at your screen. Internet shows do provide community, but it’s harder to lose yourself in the show when there are other tabs open — or to suspend disbelief sitting on your bed.

Being part of an audience is the rare chance to become fully present in an era of endless distraction. It’s a paradox: becoming single-minded among a multitude, feeling alone in a crowd. But perhaps that’s not so odd. Crowds are uncomfortable, bullying and dangerous, particularly now, but that doesn’t mean they can’t also be soothing, thrilling and good for you. They are dumb and wise, an ugly violent insurrection or a noble political march. Crowds are complicated, just like the people who form them.

Right now, I ciltse up when I see groups of people in the city, and even though indoor dining is now open, I am not quite ready to join in. But in a time of isolation and alienation, it’s clear we need the crowd more than ever.