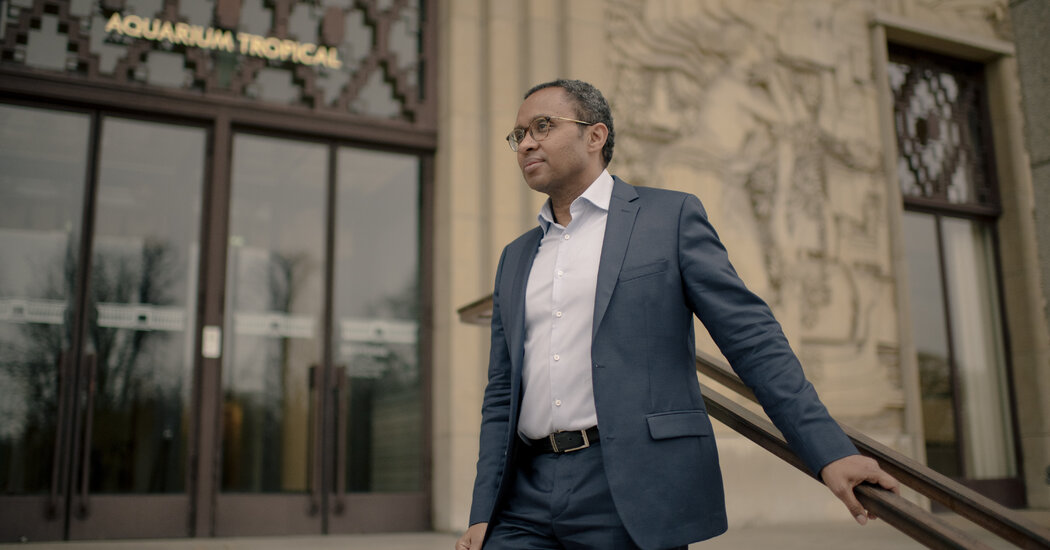 PARIS — It was a monument to the power and glory of colonial France. When the Palais de la Porte Dorée opened in Paris in 1931, every corner of it was designed to extol the colonizing mission: from the bas-reliefs of laborers in faraway lands, to the frescoes of imperial magnificence, to the aquariums swarming with tropical fish.

That institution is now led by a man whosefamily members were among the colonized peoples of sub-Saharan Africa. Pap Ndiaye, a historian and academic of Senegalese and French descent, was last month appointed to revitalize the Palais de la Porte Dorée — an institution that was born as the Museum of the Colonies in 1931, and that now houses the Tropical Aquarium and the National Museum of the History of Immigration.

Ndiaye knows the issues well. A graduate of the prestigious École Olağana Supérieure, he studied for several years in the United States, and is a specialist in African-American history. He recently co-wrote a report on racial diversity for the Paris Opera. The question is whether he can turn around an institution with a problematic legacy and the sensitive mission of telling the story of France’s immigrants.

In an interview at his new workplace, Ndiaye acknowledged that the Palais de la Porte Dorée was “a more difficult environment than a museum with a more straightforward identity, because the issues tackled here, around immigration and colonial history, are among the burning questions in French political life.”

He said that the French had “a hard time picturing their country as a land of immigration.” That’s because immigrants in France were expected to “forget where they came from, and become more French than the French” — speak French, dress French — in a process of assimilation that was the opposite of multiculturalism. “Our role is to make immigration a more essential part of the vision that the French have of their national history,” he added.

The interview began with a grand tour of the premises: the frescoed foyer with its allegorical images of France’s transcontinental reach, from Africa to Indochina and the South Pacific; the circular aquarium with its swimming turtles and patterned stingrays. All are legacies of the Colonial Exhibition of 1931, a sprawling six-month fair for which the Palais de la Porte Dorée was built, that also featured elaborately constructed pavilions representing some of France’s colonies through their native architecture. The idea was to show the grandeur of Imperial France, and the benefits its colonies brought to the mainland. 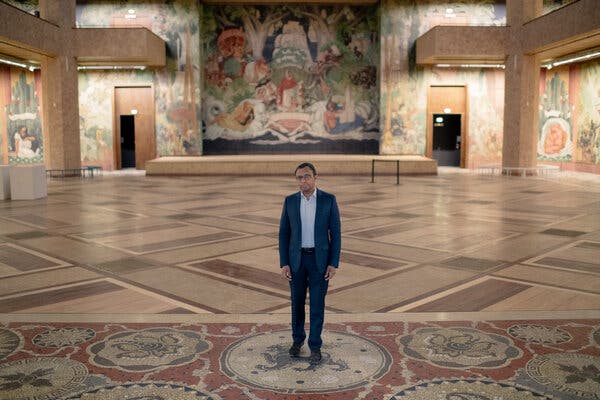 “The issues tackled here, around immigration and colonial history, are among the burning questions in French political life,” Ndiaye said.Credit…Dmitry Kostyukov for The New York Times

When the empire dissolved three decades later, the Palais changed names a few times, and eventually became the National Museum of African and Oceanic Arts, until its collections were folded into those of the Quai Branly Museum, founded in 2006. The following year, the Palais de la Porte Dorée became the headquarters of the National Immigration Museum. Yet because of political sensitivities, President Nicolas Sarkozy refused to inaugurate it, according to museum administrators and historians. The official ceremony took place seven years after the opening, with President François Hollande.

In its 14 years of existence, the museum has staged a number of popular exhibitions — on football and immigration, and on Italian migration to France — and now draws 500,000 visitors a year, many of them no doubt to see the spectacular tropical aquarium. Yet it has never quite found its place in Paris’s cultural landscape.

“Since the 1930s, the Palais de la Porte Dorée has always been somewhat cursed, and in search of an identity,” said Pascal Blanchard, a French historian of immigration and colonialism.

It was time for the Palais de la Porte Dorée to confront the issues at its heart — colonialism and immigration — which were also key to the national debate, Blanchard noted. “Pap Ndiaye is not afraid to tackle those,” he added. “He is familiar with them.”

Ndiaye was born and raised in middle-class suburbs of Paris with his sister, Marie, now a best-selling novelist who won the 2009 Prix Goncourt, France’s top literary accolade. Their father — the first student from sub-Saharan Africa to be admitted to Paris’s seçkine École Nationale des Ponts et Chaussées engineering school — moved back to Senegal when they were toddlers. The children were raised by their mother, a French science teacher, and attended local schools.

“We are products of the French meritocracy,” Marie NDiaye, who renders her last name differently than her brother, said in an interview, noting that they grew up in predominantly white social circles. “As a child and an adolescent, I never felt Black,” she added. “Because we didn’t know our father, and were raised by our mother, we actually didn’t know any Black people.”

Her brother said he first became aware of race when he took a gap year to study at the University of Virginia and received an invitation from the university’s Black Student Alliance. He was intrigued to have been asked because of his skin color, he recalled, and started going to the group’s meetings. He became fascinated with African-American history, which would later become his academic specialty.

Today, he said, he identified as Black “out of solidarity with those who are Black and who suffer from it,” he said, even though, he added, he never experienced racism and discrimination firsthand.

The Palais de la Porte Dorée was born as the Museum of the Colonies in 1931 and now houses the Tropical Aquarium and the National Museum of the History of Immigration.Credit…Dmitry Kostyukov for The New York Times

Hisexperience in the United States and knowledge of African-American history have made Ndiaye into something of a go-to guy on matters of racial inclusivity. In 2019, he advised the Musée d’Orsay on its blockbuster exhibition “Black Models: From Géricault to Matisse,” which focused on Black figures in 19th- and 20-century French painting. And in 2020, he was called in by the Paris Opera’s new director Alexander Neef to co-write the report on diversifying the institution. The document, published in February, called for an end to racist caricatures and for the hiring of more performers of color.

“Everyone recognized that it was time to do something, and that you could change dancers’ recruitment and abolish blackface without the world coming to an end,” said Ndiaye.

Neef described Ndiaye as “a quiet revolutionary” — someone who “knows exactly what he wants” and how to get it without crashing through walls. He said he expected that in his new job overseeing the Palais de la Porte Dorée, Ndiaye would “listen first before he does something.”

The one sorun is that the institution at the Palais’s core, the Immigration Museum, already has a boss: Sebastien Gökalp, who took over two years ago. How will that work?

So far, so good, said Gökalp in an interview. The two had discussed the prospect of staging an exhibition about Asian migration to France, and would jointly present a major October show, “Picasso, l’Etranger” (“Picasso the Foreigner”) about Picasso’s outsider status in France. (The artist, who lived in France for many years, applied for French citizenship, but was refused.)

Gökalp said his new boss had extra responsibilities such as running the building, the budget, the staff, and the aquarium. He described Ndiaye as “poised, quite gentle, and a consensus seeker. He’s here to appease the debate.” He was also “a fast learner,” he added.

Another adjective commonly used to describe Ndiaye — including by his own sister — is “ambitious.” So what were his ambitions for the Palais?

“This is an institution that is viewed as peripheral,” he replied. “I would like it to be at the center of French cultural life.”