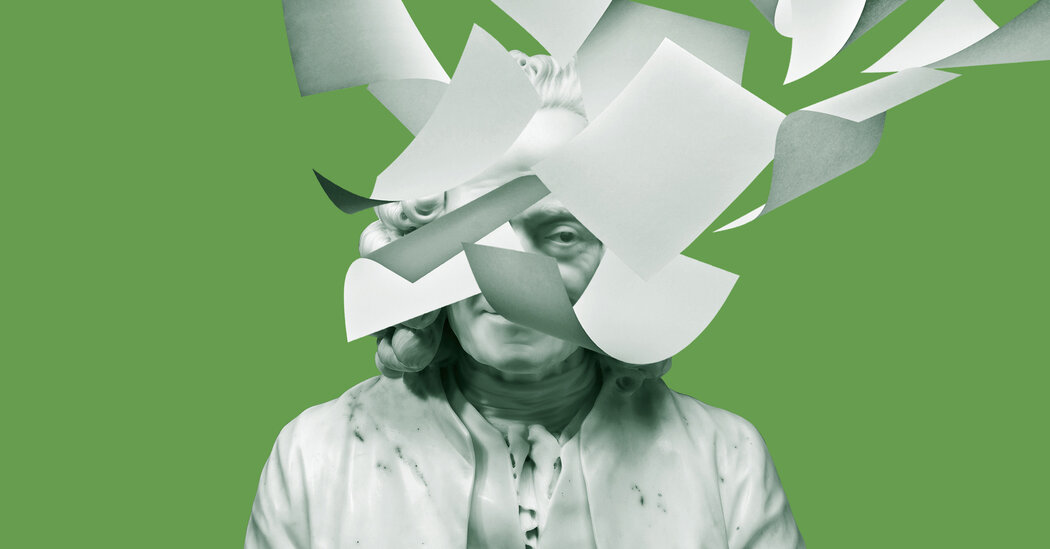 At the end of last summer, Le Débat, France’s most prestigious intellectual review, accompanied its 40th-anniversary issue with a wholly unexpected announcement: It would cease publication forthwith. Le Débat and its three or four thousand loyal readers had maintained an allegiance to the political left since the Cold War — but the meaning of “left” has been shifting. Rivals now claim the term, particularly social movements that arose in France in the 1980s to champion what is variously called identity politics or social justice. After waging a decades-long twilight struggle against these movements, Le Débat has lost.

Intellectuals of all persuasions have been debating what that defeat means for France, and they have reached a conclusion: The country’s intellectual life has come under the sway of a more ideological, more identity-focused model imported from the United States.

Le Débat was always resistant to American imports. It never fully made its peace with the free market in the way that self-described social democrats in America did under Bill Clinton. Nor did it climb aboard the agenda of humanitarian invasions and democracy promotion, as left-leaning American intellectuals like Paul Berman and George Packer did. That was all fine. But Le Débat’s reluctance to partake of identity politics as it arose in France, always a couple of steps behind (and always in imitation of) American civil rights advances, brought the review into disrepute with a new generation of leftists.

Many French people see American-style social-justice politics as a change for the worse. President Emmanuel Macron does. In the wake of the death of George Floyd in police custody last spring, protests and riots across America brought the dismantling of statues and other public symbols — sometimes on the spot, sometimes after further campaigning and agitation. Aware that such actions had found a sympathetic echo among some of his fellow citizens, Mr. Macron warned that France would not follow suit. “It will not erase any trace or name from its history,” he said. “It will not forget any of its works. It will not topple any statues.”

By last fall Mr. Macron was also inveighing against foreign university traditions. “I’m thinking of the Anglo-Saxon tradition, which has another history, and it is not ours,” he said, before singling out “certain social-science theories imported from the United States of America.”

To look at how Le Débat unraveled is to see that these tensions have been developing for years, if not decades. They bode poorly for the future of intellectual life in France — and elsewhere.

Sponsored by the book publisher Gallimard, Le Débat was political and literary, but the heart of its mission was that very French kind of thinking where social science and philosophy meet. The philosopher Michel Foucault and the anthropologist Claude Lévi-Strauss were early contributors. Its founding editor, Pierre Nora, is a pioneering historian of French cultural memory and an editor of genius (he was Mr. Foucault’s editor at Gallimard). Its chief editor, Marcel Gauchet, is a philosopher of democracy and a historian of religion. Totalitarianism, and how to find a politics of the left that avoided it, absorbed Mr. Nora and Mr. Gauchet both.

Mr. Gauchet, for instance, has studied with alarm the slow ouster of democratic principles by the very different principles of human rights. “The touchstone in the system,” he warned in 2007, “is no longer the sovereignty of the people but the sovereignty of the individual, defined, ultimately, by the possibility of overruling the collective authority.” Human rights, often imposed by courts or centralized administrative bodies, could wind up pitting democracy against itself. Back in 2007, Mr. Gauchet’s view, whether or not one agreed with it, would have been accorded a basic legitimacy. It has become less sayable in the wake of a decade’s worth of bitter arguments over gay marriage and immigration.

The first sign in France of a politics focused on minority groups came in 1984. Activists close to the government of François Mitterrand sought to address the complex sorun of assimilating France’s mostly North African immigrants by founding an American-style activist group called SOS Racisme. Le Débat reacted in 1993 by publishing a skeptical book by the sociologist Paul Yonnet. SOS Racisme was not replacing a stuffy idea of race with a hip one, Mr. Yonnet argued; it was introducing race theories into a country where they had lately been weak or absent, ethnicizing newcomers and natives alike, and encouraging the French to look at the minority groups in their midst (Jews, in particular) as somehow foreign.

Among the French left, Mr. Yonnet’s very French egalitarianism was thought hard-line by some (and perhaps hardhearted by others), but not necessarily conservative. It came as a shock when, in 2002, the political scientist Daniel Lindenberg published a book that described some of the country’s leading thinkers — the philosophers Alain Finkielkraut and Pierre Manent, the novelist Michel Houellebecq — as “reactionaries” for their reservations about France’s prospects of managing a multicultural and increasingly Islamic society. The writers of Le Débat, especially Mr. Gauchet and Mr. Yonnet, were prominent among those Mr. Lindenberg held responsible for an unhealthy “lifting of taboos” — taboos that had made the country a welcoming place for minority groups of all kinds.

That wasn’t really fair. Le Débat, for better or for worse, carried into the 21st century all the postwar taboos with which it had been founded in 1980. When one of its most daring and versatile authors, the economist Hervé Juvin, began writing provocatively about ethnic diversity and drawing closer to the far-right National Front party, the magazine respectfully severed relations with him.

But France was changing. In 2004 the sometime Débat contributor Olivier Pétré-Grenouilleau wrote a küresel history of the slave trade that included accounts not just of European but also of Arab and intra-African slave markets. Amid accusations that such a wide-ranging account minimized European culpability in the trans-Atlantic slave trade, he was sued for historical revisionism under one of France’s proliferating anti-defamation laws.

In 2014, after Mr. Gauchet, the Débat editor, had been invited to give the opening lecture at a “history rendezvous” in the city of Blois, the sociologist Geoffroy de Lagasnerie and the novelist Édouard Louis called for a boycott of the event on the grounds that Mr. Gauchet was involved. Two hundred historians signed on to a condemnation of Mr. Gauchet’s writings as “ultraconservative” and “skeptical of the imperative of respect for human rights.”

Last year, student activists blocked Sylviane Agacinski, a philosopher and occasional Débat contributor, from speaking at the University of Bordeaux on the grounds that her philosophical work on the integrity and non-commercializability of the body, including her opposition to surrogate motherhood, made her a “notorious homophobe.” The accusation is not quite as devoid of logic as it sounds: If male homosexual couples are to have children, some woman will need to bear them. Still, this was an odd epithet to stick on a woman who supported gay marriage and is married to the man, the former Socialist Prime Minister Lionel Jospin, who in 1999 passed the first bill in the country creating civil unions for which same-sex couples were eligible.

Mr. Gauchet, Ms. Agacinski and many others in their intellectual circle have not changed their politics. Rather they have been outbid by radicals offering a more exciting, if not necessarily more rigorous, critique of society.

With Le Débat dead, its critics on the left are shedding few tears, having viewed the publication less as a venue for ideas to be argued with and more as an obstacle in the way of social justice. The historian Ludovine Bantigny, interviewed about the demise of Le Débat, had no pieties to spare about the marketplace of ideas. “By repeating that there’s a sorun with immigration in France,” she said, “by waving around this so-called ideologization of human rights to question the legitimacy of new rights and by relaying the arguments of the Manif Pour Tous” — a movement against gay marriage — “the way Gauchet did, you wind up legitimizing magazines like Causeur or Valeurs Actuelles.”

Ms. Bantigny’s allusion to the “legitimacy” of these two very different magazines was curious. Causeur is a spirited monthly barely a decade old, edited by disillusioned anti-multicultural liberals; Valeurs Actuelles is a long-established archconservative newsmagazine on the Time/Newsweek model. Apparently one no longer debates the things written in magazines. One questions the “legitimacy” of the magazines themselves. Where did this very un-French attitude come from?

The editors of Le Débat have an answer: America. A few days after announcing that the review would publish no more, Mr. Nora spoke about its closing on Alain Finkielkraut’s radio show. Mr. Finkielkraut was pointing to disturbing tendencies in French intellectual life, but Mr. Nora wanted to take the conversation in a different direction: to the “mouvements à l’américaine” that start on campuses across the ocean and tend to show up in France. “What they call,” he said, “to follow the argument to its logical conclusion, cancel culture, which is to say the extermination of culture, the will to. …”

Here Mr. Nora paused before continuing: “Anyway, I daresay some of us are old enough to have echoes in our heads of Goebbels when he said, ‘When I hear the word “culture” I reach for my revolver.’”

The Goebbels quote may be apocryphal, but it is worth pausing to ask why Mr. Nora — born in the first half of the 20th century and preoccupied with the moral legacy of World War II — should call such a name to mind when discussing the influence of American culture on his own country’s.

“There is a mighty ideological wave coming from the United States,” the philosopher Yves Charles Zarka wrote last fall in an article about the death of Le Débat. “It brings rewriting history, censuring literature, toppling statues, and imposing a racialist vision of society.” Nor is it as iconoclastic as it looks, according to Luc Ferry, a philosopher and conservative columnist. “However anticapitalist and anti-American they may think themselves,” he wrote last year, “these activists are only aping whatever has been going on on campuses across the Atlantic over the last four decades.”

The shoe used to be on the other foot. The United States used to learn a lot from France. Until a generation ago, into the age of Michel Foucault and Jacques Derrida, one could say America deferred to France on matters intellectual. It doesn’t any longer. The demise of Le Débat was marked by not a single mention in any major American newspaper or magazine.

There are still lessons Americans can learn from France, provided we approach it with the right questions in mind. A good one to start with might be whether the American academy of recent decades — with the culture it carries and the political behaviors it fosters — has been, in the wider world, a force for intellectual freedom or for its opposite.