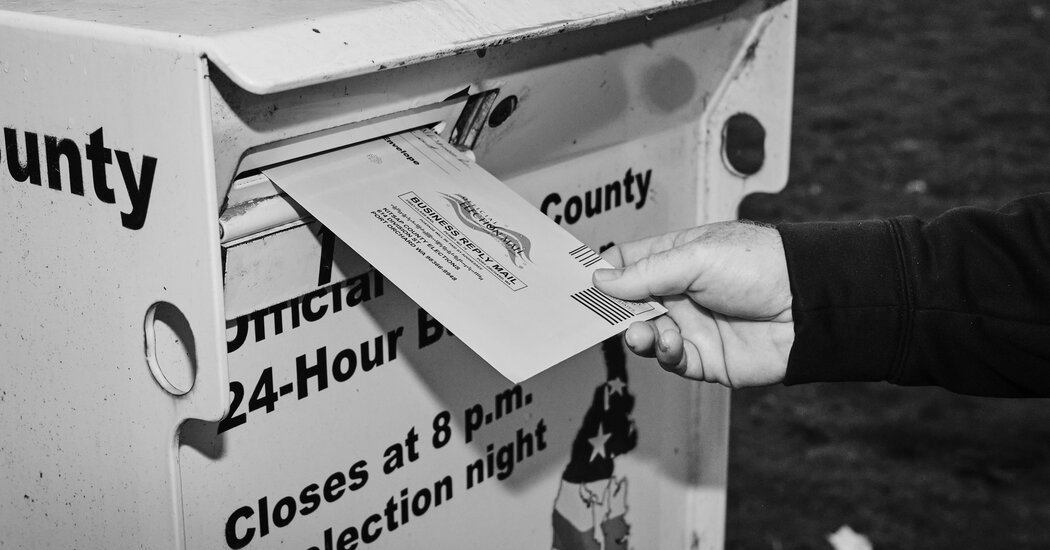 There were two columns I wanted to write this week. One was about Senator Joe Manchin’s comments cracking the door open on filibuster ıslahat. The filibuster “should be painful and we’ve made it more comfortable over the years,” he said on “Fox News Sunday.” “Maybe it has to be more painful.” With those words — and, to be fair, a few more Delphic utterances, which I’ll get to shortly — Manchin reignited the possibility of filibuster ıslahat and perhaps the restoration of the Senate.

The other was about the wave of new bills, proposals and laws across Republican-controlled states, restricting ballot access, making it harder to vote and undermining the fair administration of elections. In Georgia, SB241 would end no-excuse absentee voting, and HB531 would limit weekend voting. In Arizona, SB 1593 would shorten the early voting period and trash envelopes that weren’t postmarked at least five days before the election, and SB 1068 would give the highly partisan State Legislature more power over elections. The Brennan Center for Justice, which focuses on voting rights issues, calculated in mid-February that the number of bills introduced to restrict the right to vote in 2021 so far was seven times the size of the number that were introduced by the same time in 2020.

But then I realized something that made my job easier, even if it leaves the future of American democracy uncertain: These aren’t two different questions, but one intertwined question. There are ways to protect voting rights across the states — but they rely on filibuster ıslahat in the Senate. Stacey Abrams, prophetic as always, made this point to me back in November, just a few days before the election:

The core power imbalance in America is that Democrats win more people, Republicans win more places. In 2020, Joe Biden won 551 counties and 81 million votes. Donald Trump won 2,588 counties and 74 million votes. The Democrats’ advantage among people was enough to win power nationally, but the Republicans’ advantage in counties gave them control of more states. When the dust settled, Republicans held 61 state legislative chambers, compared with 37 for Democrats. There are 23 states where Republicans hold the lower house, the Senate and the governorship — a governing trifecta that eases the passage of highly partisan bills — but only 15 states where Democrats do the same.

There is no doubt that Republicans perceive majoritarian democracy — “rank democracy,” as Senator Mike Lee of Utah has called it — as a threat to their interests. When House Democrats tried to pass same-day registration and vote-by-mail last year, Trump told “Fox & Friends,” “They had things, levels of voting, that if you’d ever agreed to it, you’d never have a Republican elected in this country again.” The threat to Republican power comes from young voters and nonwhite voters, both of whom are growing as a proportion of the American electorate each year. That leaves Republicans with two options. They could try to choose more appealing candidates and fashion a more appealing agenda, to build a new coalition. Or they could use the power they have now to build legislative levees to protect themselves against the public’s will in the future. In state after state, they’ve chosen the latter path.

But the 2020 election gave Democrats a governing trifecta where it matters most: nationally. They hold the House, the Senate and the White House. And they have two bills — the For The People Act and the John Lewis Voting Rights Act — that would bring America closer to true democracy than it has ever been before.

Let’s start with the For The People Act. The bill would implement nationwide automatic voter registration, same-day voter registration and online registration (did you know there are still states where you can’t register to vote online?). It would limit the use of voter purges — a common tactic in which states throw people off the rolls under the guise of reducing duplication and errors — and restore voting rights to Americans with a past criminal conviction. As far as federal elections go, it would secure at least two weeks of early voting in all states, expand vote-by-mail options and restrict secretaries of state from overseeing elections in which they are on the ballot (they’re looking at you, Brian Kemp).

It would also ban partisan redistricting and force states to use independents commissions to draw congressional lines (although this would not, sadly, take effect until after the 2030 census). It would force dark money groups to name their funders and amplify the power of small donors by matching their contributions 6 to 1. It is a vast bill, and I haven’t come close to exhausting its contents. (If you’d like to dig deeper, the Brennan Center has a terrific annotated guide.)

The John Lewis Voting Rights Act is more specific: It’s aimed at restoring the Voting Rights Act, after the Supreme Court gutted it in Shelby County v. Holder in 2013. To that end, it rewrites the V.R.A. to target states with current records of racial discrimination, not just past records; tightens the focus on electoral changes that have traditionally been used to disenfranchise minority voters, like voter ID laws; and empowers the attorney general to send federal observers wherever there’s a threat of racial discrimination in voting.

Both bills are necessary. Neither has any chance of winning 10 Republican votes in the Senate. Neither is a budget bill, and so — unlike the American Rescue Plan — neither can use budget reconciliation to pass with 51 votes.

So Democrats face a choice: democracy or the filibuster.

Which brings me to Manchin’s other comments about the filibuster. According to Politico, Manchin seemed to suggest requiring “the minority to come up with 41 votes to sustain” a filibuster. That’s interesting. The way the filibuster works now, you need 60 senators to break it, but only one senator to sustain it. That makes filibusters far more painful for the majority, which has to mass all its forces, than the minority. The congressional scholar Norm Ornstein has proposed flipping the burden, so that a filibuster requires 40 senators to sustain. Ornstein described the possible result in The Atlantic in September, imagining a situation very much like the one we’re in now:

There are drawbacks to this, of course. One is that it gives the opposition party the power to simply stop all Senate business for as long as it wants. Yes, perhaps the majority could outlast them, and two months into the fight, recapture the floor and pass its bill. But that’s two months of Senate paralysis. And there is every reason to think Republicans would do as much filibustering as they could physically sustain.

For that reason, I would still prefer a ıslahat that changed the 60 vote threshold directly, while ensuring that opposition voices got heard. I’ve always been partial to the proposal of former Senator Tom Harkin of Iowa, who would have ratcheted the votes required to end the filibuster down every few days: It would start at 60, then fall, after a few days of debate, to 57, and then, after a few more, to 54, and finally, after eight days of deliberation, to 51. I’d pair it with reforms to guarantee that senators of all parties could offer amendments on all bills and weaken the majority leader’s control of the floor schedule. Put together, that would give you a Senate with more space for deliberation, more guaranteed avenues of participation, more room for unusual coalitions to pass bills but, also, an end-of-the-day assurance that simple majorities could govern.

But while Democrats are debating the best way to make müddet Republicans can be heard in the Senate, Republicans in the states are passing legislation meant to silence Democratic voters across the country. The attack on the Capitol failed on Jan. 6, but that doesn’t mean the quiet war the G.O.P. is waging on democracy won’t succeed. There are ways the filibuster can be reformed to ensure that the Senate minority has a voice. But it would be obscene to let the Republican Party use the language of minority rights to deprive actual minorities of the right to vote.