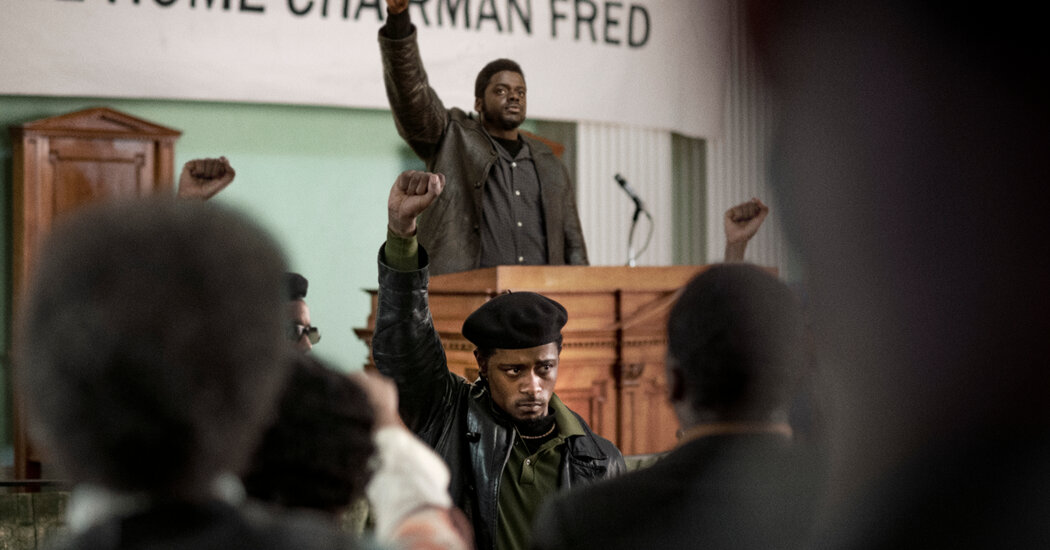 At the beginning of the fact-based drama “Judas and the Black Messiah,” an F.B.I. informant named Bill O’Neal (Lakeith Stanfield), wearing a slate gray suit and matching tie, sits in front of a camera. He’s being interviewed for the documentary series “Eyes on the Prize II,” and an unseen questioner asks, “Looking back on your activities in the late ’60s, early ’70s, what would you tell your son about what you did then?” What he did then was abet the police killing of the Black Panther leader Fred Hampton. O’Neal’s expression is guarded; his eyes flit to the right and his lips part ever so slightly, but no words come out.

The sinema thus begins with an open question: How does O’Neal account for his actions?

It’s a question the movie examines but doesn’t actually answer; “Judas” does not even give an indication that it has its own take. Despite the great performances and otherwise entrancing narrative, there’s a flaw in the storytelling: The moral opacity of the character of O’Neal fails to give us any true sense of the personal stakes involved and hinders the film’s ability to connect to current politics. In this way, “Judas” recalls another recent biographical drama about an undercover agent that punts on politics: Spike Lee’s “BlacKkKlansman,” from 2018.

In that sinema, a Black detective named Ron Stallworth (John David Washington) teams up with a white Jewish officer (Adam Driver) to infiltrate a local Ku Klux Klan chapter in 1970s Colorado. When Ron goes undercover at a Black Panthers rally, he gets involved with a student there named Patrice, who eventually discovers, to her disgust, that he’s a police officer. “Ron Stallworth, are you for the revolution and the liberation of Black people?” Patrice asks, but Ron deflects, saying, “I’m an undercover detective with the Colorado Springs police. That’s my j-o-b, that’s the truth.” 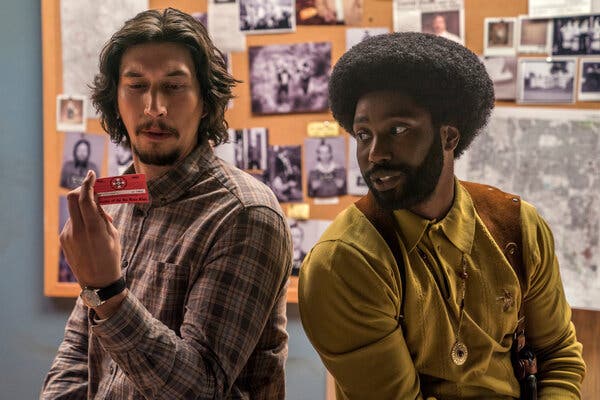 But that’s not just a deflection on Ron’s part; it’s a deflection by the sinema as well. Though Ron insists that he nevertheless cares about the Black community, Patrice has a point. As a Black police officer, how complicit is he with the system? His politics aren’t spelled out, and Washington’s acting is too wooden to reveal what Ron thinks of the radical Panthers.

At the rally he watches intently, but it’s unclear whether his gaze reflects his attraction to Patrice, a real interest in the politics or a shallow admiration for the pageantry of the proceedings, the flair of the rhetoric and the energy of the participants. There’s a sense that both Ron and the sinema see the Panthers and the Klan as comparable political extremes, just positioned at opposite ends of the spectrum, and that neither is righteous or effective — though the sinema shies away from conveying this with more confidence and clarity.

As a director known for taking risks, Spike Lee is surprisingly moderate when it comes to this film’s politics, never allowing his protagonist to cross over to the side of the revolution. In an effort to remain faithful to the conventional cop-film genre, “BlacKkKlansman” embraces the belief that not all cops are rotten. Ron has faith in the system; he has his buddies, and they’re fighting a group of violent white supremacists, so we too invest ourselves in these good cops and their fight for justice. But of course, by the end, when Ron’s superior tells him to drop the K.K.K. case, Ron is surprised to find that the institution of which he’s a part is fundamentally flawed.

While “BlacKkKlansman” maintains faith that the system might prevail thanks to a few good cops, “Judas” openly recognizes that the system is broken and veers more closely to sympathy for the Panthers’ cause without explicitly promoting or denouncing it.

“Judas” distinguishes itself by providing a nuanced look at the Panthers, not simply their militant actions but also their community initiatives. And like many of the characters themselves, the sinema is captivated by the charisma of its Black messiah, Fred Hampton (Daniel Kaluuya), who won a Golden Globe on Sunday for his performance. He brings his usual steely intensity to the role; it’s like watching a game of chicken between him and the camera, so resolute is his gaze and so palpable his attention when he cocks his head to the side like a challenge.

Hampton is not the real focus of the sinema; Shaka King’s direction and Kaluuya’s performance give him such depth and appeal that he steals the spotlight. But the sinema begins and ends with Bill O’Neal. He is our eyes, his path is what leads us to Hampton — he should be the film’s real focus. And his ambivalence and internal conflict about betraying Hampton, despite his being the propulsive force behind the film’s tension, lack a clear motivation.

Bill dances around the issue of his motives and politics, whether he’s working for the F.B.I. or the Panthers. The agent he reports to, Roy Mitchell (Jesse Plemons), interrogates Bill about his stances on the assassinations of the Rev. Dr. Martin Luther King Jr. and Malcolm X, but Bill shrugs off the questions, saying he’s never thought about them. Whether he’s in earnest or lying to stay safe is unclear. In a later scene, an undercover Mitchell observes Bill at a rally and concludes that this operative must actually be invested in the movement — either that or he’s a terrific actor.

And that’s part of the sorun too — that Bill does seem to be an Academy Award-worthy actor, and Stanfield, who is such a careful, cerebral actor, delivers a performance that is almost too perfect. With just a sideways glance or a subtle movement of his mouth he immediately conveys a switch of role, cluing us in yet again that despite Bill’s seeming devotion to the Panthers, this is all a performance, one that confounds not just Agent Mitchell and Fred Hampton but us as well.

It’s possible that we’re meant to see Bill as an opportunist, so politics are irrelevant. But for a sinema so blatantly political, that seems unlikely.

It’s strange that these dramas opted for noncommittal protagonists because both clearly want to engage with the real world — with history and modern-day events. “BlacKkKlansman” includes footage of the deadly Charlottesville Unite the Right rally the year before the movie was released, and the epilogue of “Judas” includes details about Hampton’s partner and son and their continued involvement with the Panthers, along with footage of the real O’Neal from “Eyes on the Prize.”

Perhaps one reason these otherwise politically outspoken (and liberal-leaning) films are reluctant to take a stance involves actual history, a fear they might misrepresent the real flesh-and-blood men they depict. And perhaps it is symptomatic of a lack of imagination that despite their gestures toward the present, “Judas” and “BlacKkKlansman” don’t dare expound on Black radical politics or negotiate what these politics — or even ambivalence — could mean in the context of the real-life climate in which the films were released.

O’Neal with his F.B.I. handler, played by Jesse Plemons.Credit…Warner Bros

Either way, the films underestimate the depth of their protagonists and the awareness of the audience. In the argument between Patrice and Ron or the meetings between Bill and his F.B.I. handler, King and Lee could have forced their respective protagonists to confirm their views on radical activism vs. the law enforcement system and negotiate their positions in the larger narrative of the history within that divide, but “Judas” and “BlacKkKlansman” shuffle away, tails between their legs.

In the “Eyes on the Prize” footage, the real O’Neal sits in front of the camera, in that slate gray suit and tie, and is asked the question we heard in the beginning: “What would you tell your son about what you did then?” There’s the pause and the eyes shifting to the right. His response, when it comes, is indecipherable: “I don’t know what I’d tell him other than I was part of the struggle, that’s the bottom line.” He then says that “at least” he “had a point of view,” though he doesn’t state exactly what that was.

That O’Neal, who committed suicide in 1990 on the same day “Eyes on the Prize II” premiered, is the film’s Judas is appropriate. In the Bible, the end of Judas’s story is unclear. In one gospel he hangs himself out of guilt for betraying Jesus. In another there’s no account of his guilt, but he dies in what seems an act of divine punishment. Did Judas betray the Messiah for those 30 pieces of silver alone, or did he have other reasons? Did he regret the action afterward, and if so, was it for his role in the murder of another human being or for a more personal betrayal of his own beliefs, that he offered up the man he honestly believed was the messiah?

O’Neal’s final words in the clip are, “I think I’ll let history speak for me.” That’s where O’Neal and these two otherwise good films were wrong. History has no mouthpiece of its own; it can only speak through the interpretations of those who tell the stories of the past. And if those stories intend to also speak to our present, they must speak with conviction. They must take a stance.