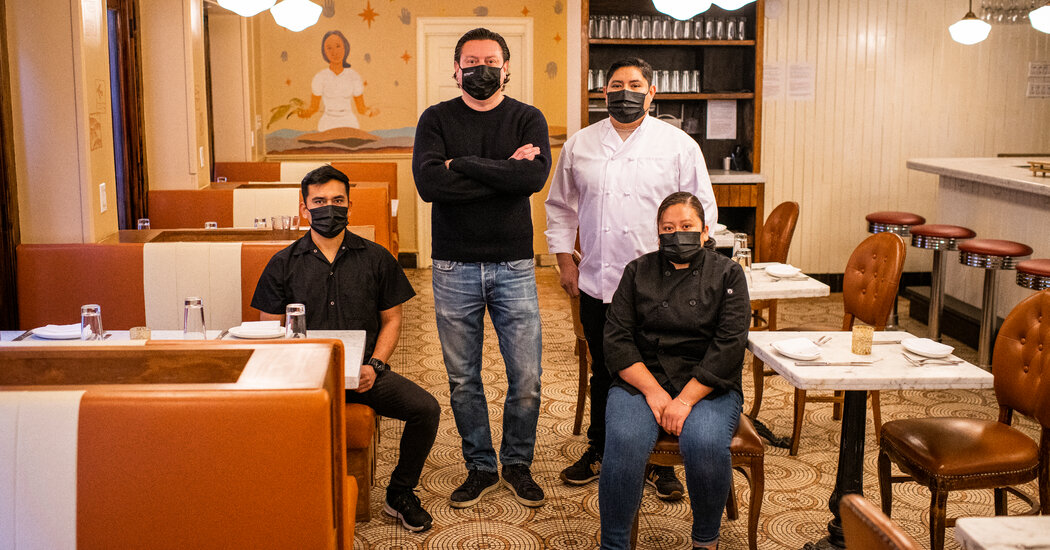 In redoing one of his Toloache locations, the chef and restaurateur Julian Medina and his business partner, Louis Skibar, have given culinary voice to their staff. The menu features a snapshot of home cooking from about 10 cooks, many from the Puebla, Mexico, area, with dishes like tacos de birria, tostadas, various moles, and steamed cod in banana leaf. The cooks offer personal background: Victor Lopez said his enfrijoladas and sopa de fideos with angel hair pasta remind him of his mother, and Yuliani Palafox recalled her mother and grandmother frying spices and nuts for mole poblano. As for drinks, in addition to tequilas and mezcals, there will be raicilla and sotol, a spirit from northern Mexico. It’s combined with aperol, prickly pear, lime and agave in a cocktail called La Dasy. The restaurant, in neutral tones brightened with Mexican arka, is on two levels with 44 seats at 35 percent capacity. Seven heated cabanas outdoors accommodate up to 28. (Opens Wednesday)

This space next to the chef Hiroki Odo’s o.d.o restaurant won’t serve food for now, but rather showcase work by local artists and craftspeople, as well as some artisans from Japan. The inaugural exhibit is “Botanicals,” minimalist photography by Cody Rasmussen of New York. Mr. Odo expects to use the site for dinners come summer. (Thursday)

This well-stocked 13,000-square-foot entry in Queens is the latest addition to this chain, with locations in the financial district and Williamsburg, Brooklyn.

The annual New York edition of the Burgundy wine extravaganza organized by Daniel Johnnes will be virtual this year and not limited to New York. It starts Wednesday and continues through March 21 on Zoom, with seminars, tastings (wines are available to order), auctions and conversations with winemakers. The events are $50 to $275, and several are free.

The announcement last month that indoor seating would increase to 35 percent from 25 percent has inspired a number of restaurants to reopen. Here’s a sampling.

This seafood temple will reopen March 17 with a state-of-the-art ventilation system and a prix-fixe menu for $180, with $5 donated to City Harvest.

This SoHo favorite will roll out dinner indoors starting March 24, brunch starting March 27, lunch beginning March 31 and breakfast April 12. There will also be 68 seats on Spring Street and another 24 seats on Crosby Street. Until a new chef starts in May, Laurent Kalkotour of Minetta Tavern will oversee Balthazar’s kitchen.

On March 25, this restaurant will reopen its upstairs dining room, and continue to serve a menu from the chef Mashama Bailey, of the Grey in Savannah, Ga. The ground-floor lounge was also reconfigured, with Japanese-inflected food by the resident chef, Nickolas Martinez.

This restaurant, upstairs in the Langham Place Hotel, is back in business with a three-course menu for $36.

This TriBeCa restaurant has organized its dining room with two seatings nightly, reservations required, at tables for one to six.

A yakitori specialist with a $150 tasting menu, this restaurant will have 10 counter seats open starting Tuesday.

Nakaji and Bar at Nakaji

This restaurant with two spaces within opened in early March 2020, only to close after just two weeks. Nakaji has reopened with a $225 omakase menu. (The bar is not yet open.)

This elaborate Williamsburg, Brooklyn, brasserie closed after just seven dinners by the chef Chris Cipollone. It is now back in business.

Angie Mar, the proprietor and the chef of the Beatrice Inn, which closed in December and has been selling pies to go, will not name her new restaurant Beatrice as planned. Instead, it will be called Les Trois Chevaux. A release said that Ms. Mar’s surname means noble steed and that, when she was growing up, her father and uncles referred to her and her two brothers as the three horses. It also said the new restaurant will be an “ode to the great French restaurants and brasseries of eras past, while also looking to the future of hospitality, and a fine-dining experience that is unequivocally downtown New York.”

Next year, Keith McNally and Stephen Starr, his partner in Pastis in New York, will open an edition of the restaurant in the bustling Wynwood neighborhood in Miami. At least half of the restaurant’s tables will be outdoors, and it will replicate the New York location’s vintage look. “The thrill isn’t gone to be opening another restaurant,” Mr. McNally said.

This landmark office building occupying a full block in West Chelsea is installing major food components in its ground-floor retail space. A Marcus Samuelsson restaurant will occupy more than 5,000 square feet at the corner of 26th Street and 11th Avenue for a dining concept to be named, and scheduled to open later this year. There will also be a 13,000-square-foot food hall and marketplace to be run by a Chicago company, 16 on Center.

Chefs on the Move

Opening the Kitchen Door: Women Chefs Who Paved the Way

Mashama Bailey, Rebecca Charles, Christine Cikowski, Anita Lo and Sara Moulton will discuss their careers with the chef Tanya Holland on a Zoom session organized by Les Dames d’Escoffier New York on Monday from 5 to 6 p.m. Tickets are $20.