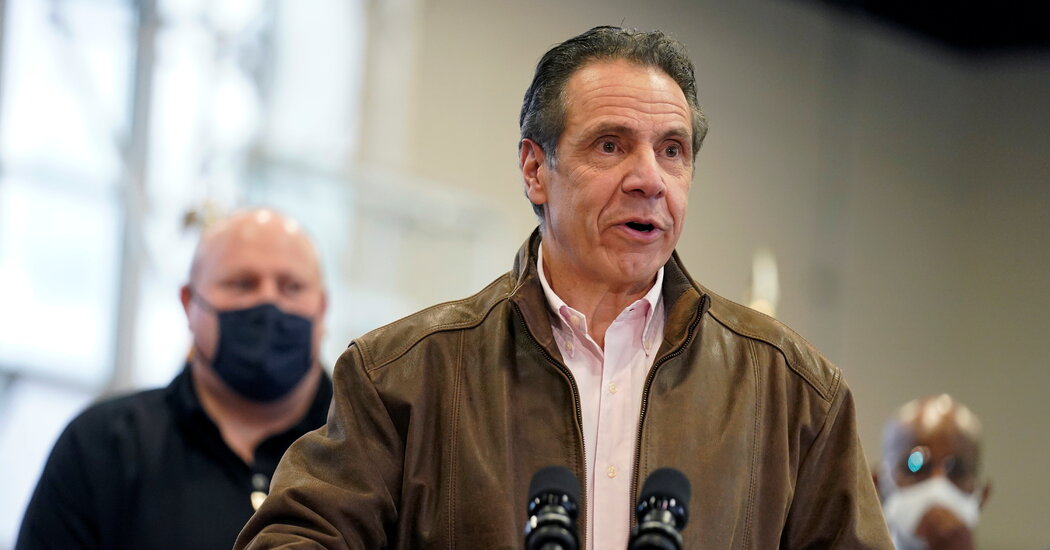 Weather: Sunny and breezy. High in the low 50s. 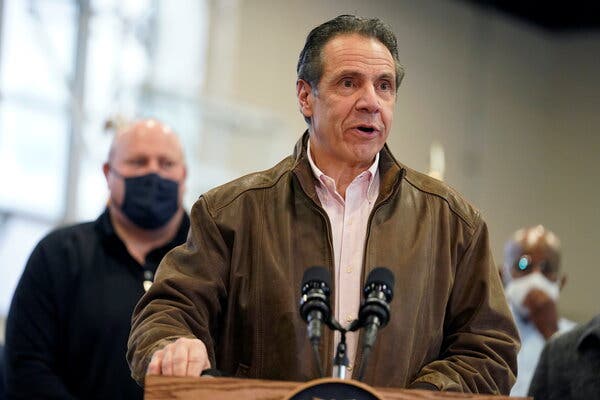 The candidates running to become New York City’s next mayor already face a laundry list of challenges as the city recovers from the pandemic.

In recent weeks, another issue has emerged: Gov. Andrew M. Cuomo is under intense scrutiny after three women accused him of sexual harassment. While some candidates have called for an investigation into the women’s claims, others have pushed for the governor to resign.

The candidates running to succeed Mayor Bill de Blasio had been talking about how they would have a better relationship with Mr. Cuomo, but the tone drastically changed in recent days, my colleague Emma Fitzsimmons wrote.

[Mr. Cuomo’s troubles may alter the dynamic for the next mayor.]

Here’s how some of the Democratic candidates have reacted:

Ms. Wiley, former counsel to Mr. de Blasio, has made multiple statements calling for a “truly independent investigation” free of the governor’s influence.

Ms. Wiley, who criticized Mr. Cuomo for avoiding public appearances during a public health crisis, also said that “no one should throw around words like impeachment or resignation lightly.”

“When you hold public office, when you have the power of the state at your finger tips, you have to demonstrate to all of us that you are above reproach,” she said in an Instagram görüntü.

Days later, she doubled down on her position and said she supported an investigation into the governor’s workplace in response to the sexual harassment allegations.

“Governor Cuomo should not be allowed to ruin any more lives,” Ms. Morales said in the statement.

Mr. Yang, a former Democratic presidential candidate, has also called for an independent investigation into the sexual harassment allegations. Mr. Yang had previously said that he had an in with Mr. Cuomo, citing his relationship with the CNN host Chris Cuomo, the governor’s brother.

Mr. Stringer, the city comptroller, was considered an ally to Mr. Cuomo and was the only mayoral candidate invited to cast the state’s elector ballots for President Joseph R. Biden.

Mr. Stringer said he did not tolerate sexual harassment.

“I continue to support a thorough and truly independent investigation of the governor’s conduct, and if it supports these serious and credible allegations, Governor Cuomo must resign,” he said.

Read more about the scrutiny on the governor:

Here’s How the Cuomo Sexual Harassment Investigation Could Play Out

New York City is ramping up testing for variants as the vaccine rollout continues.

Biggie Smalls, the Human Behind the Legend

The Return of the Foyer

The New Jersey federal judge whose son was killed and husband injured by a gunman has returned to the bench. [New York Post]

Two women who worked at a New Haven, Conn., restaurant together learned they are biological sisters. [ABC]

And finally: The fight for Jing Fong

The “Save Jing Fong! Protect Chinatown!” chants were heard up and down Canal Street on Tuesday morning. Over 70 people gathered to protest the closing of the largest restaurant in the area — and one of few unionized restaurants in New York City.

Jing Fong is ending indoor dining on March 7. The closing is due, in part, to the business losses caused by the pandemic.

The restaurant will remain open for takeout, delivery and outdoor dining, but 150 workers will lose their jobs.

“They closed dining, we stopped working,” said TanLi Zhen, 59, who worked as a dim sum server for over 20 years.

[See what happened as workers protested on Canal Street.]

Over 70 Jing Fong employees are members of 318 Restaurant Workers Union. The restaurant’s size underscores its influence as a community space and its effect on surrounding businesses.

“My brother’s friend was supposed to get married there,” Antonia Kuo, 33, said. She frequented Jing Fong and was there to show support. “The dining room being an active place for the community is like a major asset, and losing it is a tragedy.”

I lived and worked as a teacher in East Harlem in the mid-1970s. Several evenings each week, I took a yoga class at East West Books on Fifth Avenue near 14th Street. The class would finish by 9 p.m., and I would take the No. 6 home.

One night after leaving class, I boarded a rather crowded car at the same time as a male passenger who had clearly spent some time at a local pub. Although harmless, he was verbally obnoxious.

“Is this 59th Street?” he shouted as the train made its stops on the way uptown.

When we stopped at Grand Central, he did it again.

This time, everyone in the car, it seemed, responded loudly in unison: “Yes!”

He got off the train.