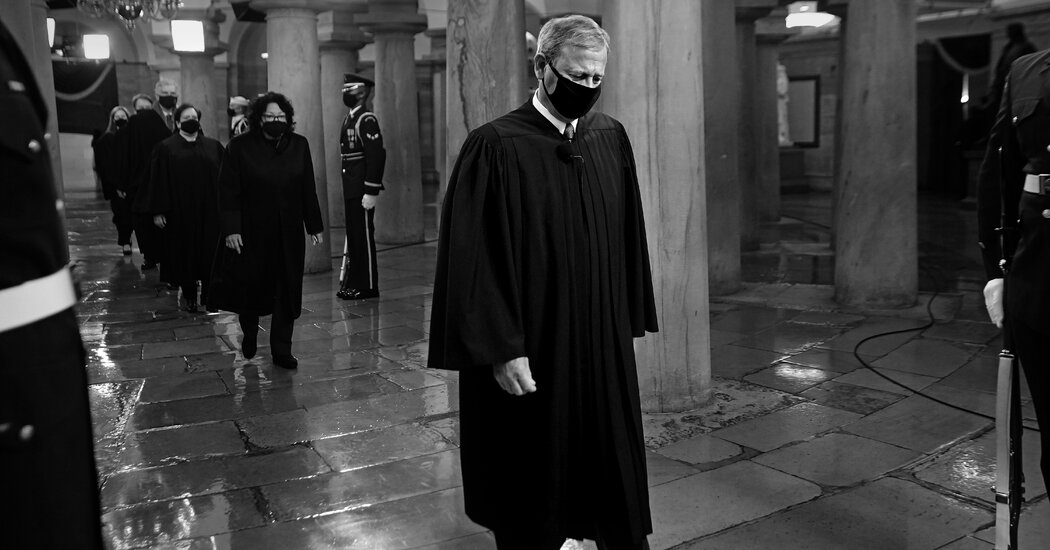 Anyone who still needs proof of how the Supreme Court is changing need look no further than the single decision the justices handed down this week. The court held that a dispute that had become moot in the usual sense of that word — the sorun was resolved before the case even went to trial — could be litigated nonetheless, because there was still something at stake: the one dollar the plaintiffs were seeking as damages for an asserted violation of their First Amendment right to free speech.

The holding was surprising in its generosity to the plaintiffs, as was the 8-to-1 vote, but that’s not what made Uzuegbunam v. Preczewski remarkable. Rather, it was the identity of the lone dissenter: Chief Justice John Roberts.

In more than 15 years on the court, the chief justice had never before filed a solitary dissenting opinion. In fact, he has rarely voted in dissent at all, and has written dissenting opinions even less frequently. During the term that ended last July, he was in the majority 97 percent of the time. No chief justice since Fred Vinson, during the 1949 term, has displayed that degree of alignment with his court. To the extent that the Roberts court had a center of gravity, Chief Justice Roberts was it.

Justice Amy Coney Barrett’s arrival in late October changed all that, and quickly. A few minutes before midnight on the night before Thanksgiving, the court issued an order suspending the indoor attendance limits that Gov. Andrew Cuomo had placed on religious services in areas of New York with high rates of Covid infection.

Back in May and again in July, the court had rejected similar challenges to attendance limits set by governors in California and Nevada. In each of those cases, the vote was 5 to 4, with the chief justice in the majority and the dissenters in both cases the four justices to his right: Clarence Thomas, Samuel Alito, Neil Gorsuch and Brett Kavanaugh.

But by Thanksgiving konuta, the lineup was different. There were now five justices to John Roberts’s right. He was in dissent, along with three allies from the earlier cases, Stephen Breyer, Sonia Sotomayor and Elena Kagan. One crucial ally was missing: Justice Ruth Bader Ginsburg, who had died in September and was replaced with shocking speed by Justice Barrett.

The case this week was of course very different from the Covid cases, which in the conservative justices’ view pitted the unbridled power of the state against the First Amendment right to free exercise of religion. On the surface, at least, last week’s case was much less fraught, seemingly taken from the back pages of a casebook on civil procedure or federal-court jurisdiction rather than from today’s headlines. But its bread-and-butter nature makes it, perhaps even more than the Covid cases, a fitting symbol of the chief justice’s abrupt reversal of fortune.

Beyond the personal, the case illuminates a significant doctrinal shift on the court, one that I think goes far to explain the chief justice’s isolation from his fellow conservatives. The case was about standing: whether evvel a plaintiff in a lawsuit achieves the substantive result he asked for, he can keep the lawsuit alive as long as a request for nominal damages — say, one dollar — remains at stake.

In this case, two Evangelical students at a public college in Georgia who had been denied the opportunity to preach on campus sued the college for violating their First Amendment rights. The college quickly changed its policy and then asked the Federal District Court to dismiss the case as moot. The doctrine of standing requires plaintiffs to show that the injury they suffered can be redressed by judicial action. But because the students had already won their point, the college argued, their case failed the “redressability” requirement. Two lower courts agreed, dismissing the suit for lack of standing. But with a majority opinion by Justice Thomas, the Supreme Court reinstated the suit, holding that the students’ request of nominal damages was sufficient to keep it alive.

The decision has practical implications. It will help people pursue cause-related litigation in cases where actual money damages are minimal to all but nonexistent. It also may make it somewhat more difficult for a defendant to avoid an adverse judgment by giving the plaintiffs what they want, although as Justice Kavanaugh suggested in a concurring opinion, and the chief justice agreed in his dissent, a defendant in that position could end the case by handing the plaintiff whatever paltry sum was at stake.

Warning that the decision would lead to “a major expansion of the judicial role,” the chief justice wrote: “Until now, we have said that federal courts can review the legality of policies and actions only as a necessary incident to resolving real disputes. Going forward, the judiciary will be required to perform this function whenever a plaintiff asks for a dollar.”

Beyond those practical implications, what makes the decision notable is what it says about conservatives’ current view of courts. The question of standing is an important aspect of the larger question of who gets access to the courts, and until recent years, conservative judges took a narrow view of standing. That was consistent with their constrained view of the role of the federal courts. A wide-open courthouse door was seen as an invitation to judicial activism.

Evvel part of the conservative DNA, that attitude began to change as “judicial activism,” evvel an epithet, morphed into “judicial engagement,” now a laudable goal in conservative circles. After all, the courts are increasingly friendly. Why avoid them? Why not use them?

I don’t think it’s a coincidence that this case involved not just speech, but religious speech. The case was brought to the court by Alliance Defending Freedom, a Christian-right litigating organization best known for representing bakers and other vendors who refuse to do business with same-sex couples celebrating their marriages. Given the reflexive deference that the current Supreme Court majority pays to any claim that comes dressed in religious garb, it’s easy to see the appeal of this case as a vehicle for keeping open the courthouse doors.

And it’s not hard to see why the court’s liberals, Justices Breyer, Kagan, and Sotomayor, went along for the ride. Religion is not at the top of their agenda, but retaining the ability of people to vindicate all kinds of rights through access to courts certainly is. Still, their acquiescence to this decision presents a puzzle. The Trump administration appointed more than 230 judges to the federal courts. I’m afraid the liberal justices may be living in a time warp if they retain the view they doubtless absorbed in law school that courts are inevitably a rights-seeker’s friend.

This brings me back to the chief justice. His opinion was pure John Roberts: pithy, smart, with deep historical analysis leavened by a touch of sarcasm. “The court sees no sorun with turning judges into advice columnists” was his description of what will happen with courts no longer limited to deciding live controversies. No law clerk wrote that sentence. The view of standing that Chief Justice Roberts expressed in this opinion has always been his view of standing. It was the view he expressed in one of his earliest opinions, DaimlerChrysler v. Cuno, within months of taking his seat on the court. It was the view he took in one of his most important dissenting opinions, in the 2007 case Massachusetts v. Environmental Protection Agency.

It was undoubtedly the view of standing he learned during his own judicial clerkships. He first clerked for Judge Henry Friendly of the United States Court of Appeals for the Second Circuit, an intellectually rigorous judge who believed in a limited role for the judiciary, followed by a Supreme Court clerkship for William Rehnquist, then an associate justice, at the time still a fiery conservative with none of the mellowing he later displayed as chief justice.

“Today’s decision risks a major expansion of the judicial role.” Either Judge Friendly or Justice Rehnquist could have written that line, but it was their former law clerk who built a powerful dissent around it.

And who now stands alone.