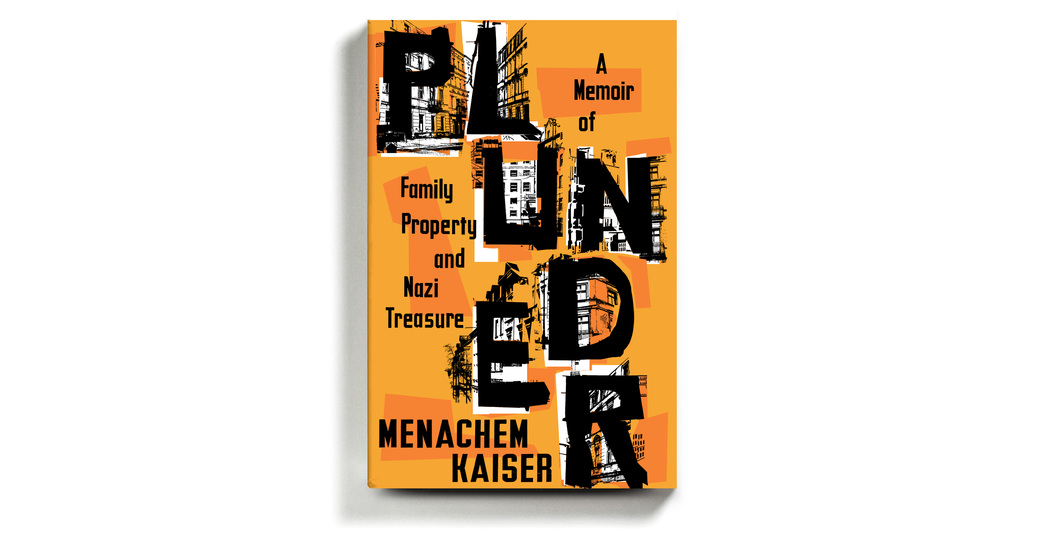 Menachem Kaiser’s “Plunder: A Memoir of Family Property and Nazi Treasure” tells a twisting and reverberant and consistently enthralling story. It’s a weird story that gets weirder.

Kaiser, the descendant of Polish Jews, is a young writer who grew up in Toronto. “Plunder” is about what happens after he takes up his Holocaust-survivor grandfather’s battle to reclaim an apartment building in Sosnowiec, Poland, that the family owned before the war. The author has no great hope of success. His father and grandfather made inquiries over decades but got nowhere.

Kaiser hires a Polish lawyer known as “The Killer.” She wears pink velour tracksuits under her black judicial garments. The Killer starts a process that has Kafkaesque hurdles. For example, Kaiser needs to prove that his ancestors, who were killed in the Holocaust and who would be 130 or 140 if still alive, are actually dead.

At one point he has to hire a second lawyer to explain the actions of his first one.

Court cases percolate in the background while Kaiser visits the property, where he finds good people with real lives. The building housed residents connected with a theater. They threw wonderful parties, and gathered for large social events. What’s he going to do, evict everyone?

Kaiser is a reflective man on the page, with a lively mind. He dwells on the moral seesaw he finds himself on. Some friends think his quest is interesting and meaningful. He’s righting an old wrong. Others think his mission is an act of — dread word in 2021 — appropriation. He’s taking other people’s homes. He’s messing with people’s security.

“I was a Jew coming back for his family property — this is a veritable trope in Poland,” he writes. He tries to untangle the knot of his motivations. He works to put himself in the shoes of the people in his family’s building. He does so, up to a point. He also writes, “The reason my family is no longer in Sosnowiec is that they were all murdered.”

Fate takes the author by the hand, and this story takes a turn. Kaiser learns that his grandfather had a cousin, Abraham, who not only survived the war but wrote a memoir while he was a slave laborer in an enormous, secret Nazi tunnel complex known as Project Riese. He made diary entries on scraps of bags that held concrete, hid them in latrines and returned for them years later.

Abraham’s memoir is little-known to the world at large, but it is famous among a band of gung-ho Silesian treasure hunters. (The author describes one as “Indiana Jones but more commando.”) For them, it’s a guidebook to Nazi plunder. These treasure hunters wear camouflage and drink too much vodka. Some have elaborate and expensive equipment; others have dented metal detectors. Among them, Kaiser himself is a celebrity because of his relation to Abraham.

Kaiser falls in with them. They take him through the tunnels. They show him their scavenged Nazi memorabilia. They drink vodka together around campfires. About one of these nights, Kaiser comments, “I was taking notes but not responsibly.”

The scale of these tunnels is awesome to behold. “Look what the Nazis set out to do, my god,” Kaiser writes. “Look how far they got. Look how fast they got there.”

Menachem Kaiser, the author of “Plunder: A Memoir of Family Property and Nazi Treasure.”Credit…Beowulf Sheehan

The size and mystery of these tunnels have given way to conspiracy theories. They contained a train filled with plundered gold. They were meant to house underground Nazi cities. Nuclear weapons. Anti-gravity devices. One cement structure, according to the local military museum that houses it, was “a testing rig for Haunebu III, a flying saucer built by the Nazis.”

Kaiser considers the nature of conspiracy theories, in a way that’s highly relevant to our era. (His thinking about reparations of various kinds is as complex and timely.) He notes how some have argued that such theories are “a form of resistance against the dominant narrative, a means of casting aspersions on the entrenched power structure.”

He ponders these arguments, then flings them away as intolerable horse waste. “I am not so generous,” he writes. “Personally I am comfortable pathologizing beliefs in Nazi time machines.”

He locates an intractable anti-Semitism in these beliefs. “Yes, yes, fine,” the conspiracy-minded say, he writes, “the Germans did some murdering and the Jews did some dying but let me tell you the real story.” Jewish deaths are recontextualized and placed into a “grander” occult narrative.

He writes about the man, his mind addled with anti-Semitic conspiracy theories, who gunned down 11 Jews in a synagogue in Pittsburgh in 2018. “There is a cost,” Kaiser writes, “to laughing at what should be condemned.”

“Plunder” has many stories to tell. There’s an escaped-prisoner love story that could be a book of its own. It would be wrong to say more about these, or about the fate of Kaiser’s self-assigned mission to reclaim his family’s property.

“Plunder” has many moods and registers. It acquires moral gravity. It pays tender and respectful attention to forgotten lives. It is also alert to melancholic forms of comedy.

Tonally I was reminded at times of Jonathan Safran Foer’s excellent first novel, “Everything Is Illuminated,” about a young American Jew who returns to Ukraine in search of the woman who saved his grandfather’s life.

Kaiser says he debated writing “Plunder” as a novel. I can see why. “Nonfiction is a pleasant way to walk,” Larry McMurtry wrote, “but the novel puts one horseback, and what cowboy, symbolic or real, would walk when he could ride?”

One can be happy Kaiser declined to gallop. Traveling on a private road, closer to the ground, and at a slower pace, his walk turns up details that are fresh, unexpected and significant. His perceptions are sharp. We partake of his curiosity.

The self-aware and ironic detours the author takes reminded me of Robert Creeley’s line, in his essay “Reflections on Whitman in Age”: “Turn left by the old house that used to be there before it burned down.”