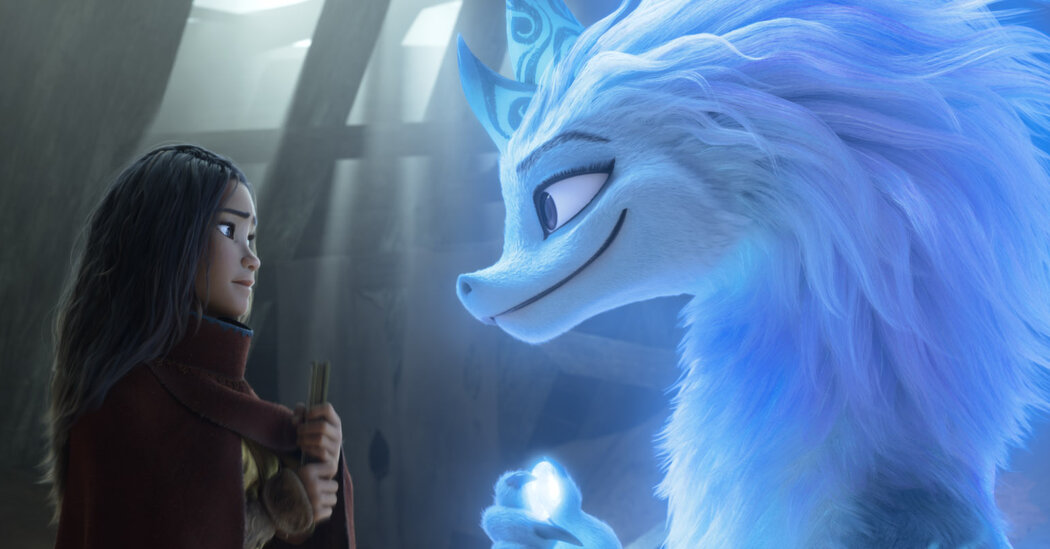 Not long after she follows her dad’s lead when he extends an olive branch to the fellow leaders of the other kingdoms that evvel comprised Kumandra — an ancient utopia of cross-cultural unity — she’s betrayed by a new friend, Namaari (Gemma Chan).

Raya (Kelly Marie Tran) had giddily offered to give her pal — a fellow warrior princess with whom she’d bonded over swords and curry — a peek at the dragon gem that’s causing all the grown-ups to act out. Unfortunately for Raya, Namaari’s chumminess is part of a ruse to get that precious rock: in this factionalized, dog-eat-dog world, even the kids are con artists.

Turns out the stone is the only thing standing between humanity and the Druun, a “mindless plague” that turns people into terra-cotta statues. This shapeless, electric-purple evil is unleashed when the gem shatters, throwing the planet into the Dark Ages.

Six years later, Raya is a young woman and a solo adventurer zooming around a desert wasteland on her trusty pill-bug-armadillo. Her moment of past weakness haunts her — figuratively and literally, with a pugilistic Namaari always on her tail.

Faith in the goodness of other people — even those from distant lands and of different persuasions — is the governing theme of “Raya and the Last Dragon,” which the directors Don Hall and Carlos López Estrada, and the screenwriters Qui Nguyen and Adele Lim, set in a fantasyland version of Southeast Asia complete with floating markets, water taxis and lots of shrimp congee.

In typical Disney-princess fashion, our brooding heroine acquires a joke-slinging sidekick in nonhuman form: Sisu (Awkwafina), the titular last dragon, who (like Mushu in “Mulan” before her) isn’t a menacing behemoth so much as a klutzy, shape-shifting My Little Pony-like creature.

Raya and company traverse multiple lands to collect the scattered pieces of the stone, giving the creators an excuse to indulge in expansive world-building, while snappy editing and rousingly choreographed action scenes animate these settings with comic strip panache. The animators don’t stray far from the overall style of recent Disney fare like “Frozen” or “Moana,” though the film’s meticulously detailed environments — rainforest shrines teeming with visible moisture, snowy mountain fortresses shrouded in fog — are particularly impressive.

The Disney treatment, like the Druun itself, seems to neutralize whatever it touches, no matter how hard it works to preserve the distinctive elements of the non-Western cultures it has brought under its label, especially recently. Is Disney paying tribute to these cultures? Or are these cultures instruments of corporate strategy? Places as different as Mexico (“Coco”), the Polynesian Islands (“Moana”) and now Southeast Asia are flattened along the Disney continuum, with each feeling like one in a collection.

In any case, the gender politics of the recent live-action “Mulan,” which some found to be retrograde, puts “Raya” in perspective: There’s no doubting our heroine’s abilities, nor is there mention of her being exceptional. “Disney princess” may eventually just become another word for “superhero,” but at least she won’t need saving.

And here, the most meaningful and transformative relationships are between women, er, feminine beings. Raya and Namari must learn to trust each other despite the history of betrayal — and between them there’s maybe, just maybe even the faintest hints of sexual tension. Then there’s Sisu, whose unwavering faith in humanity will leave its mark on both ladies. The unity rhetoric feels awfully trite, but it also teaches forgiveness: a worthy lesson for the kids.

Raya and the Last Dragon
Rated PG. Running time: 1 hour 54 minutes. In theaters and on Disney+. Please consult the guidelines outlined by the Centers for Disease Control and Prevention before watching movies inside theaters.